A Nor'easter that will make its way up the coast this weekend could drop as many as four inches of snow on parts of the Philadelphia region on Sunday, the first day of spring.

While weather models differ on the speed of the coastal storm and its arrival time in the area – anywhere from Saturday afternoon to after midnight Sunday – they do agree that areas along, and north and west of the I-95 corridor will likely remain all snow during the length of the storm, the National Weather Service said. The warm ground and marginal temperatures may limit snow amounts, but 2-4 inches of accumulation is likely.

Related story: Beyond record hot, February was 'astronomical' and 'strange'

Areas south of the I-95 corridor could begin as snow, then mix with or change over to rain at times, then possibly change back to snow before it ends, forecasters said. Places that see a changeover to rain may not see much accumulation at all, and areas in between could see 1-2 inches perhaps, with less where there is a wintry mix.

The storm picture will likely evolve over the next few forecast cycles, forecasters warned.

There are some preliminary predictions of 8-12 inches of snow in New York City by the time the storm ends. 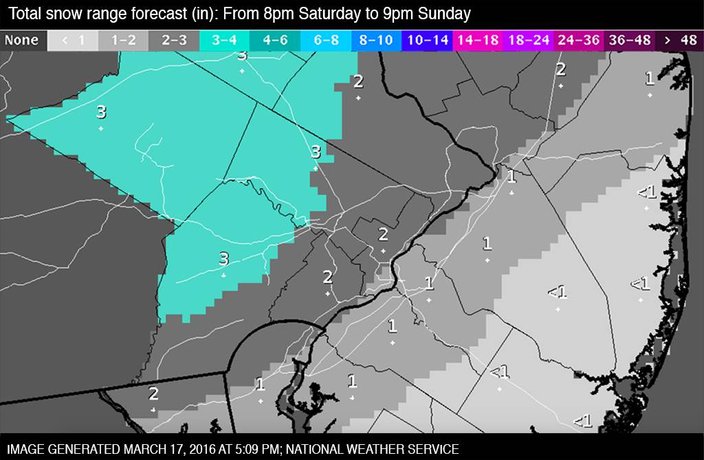 Here is the forecast from the weather service:

A chance of snow, mainly after 2am. Mostly cloudy, with a low around 31. Chance of precipitation is 50%.

Snow likely, mainly after 8am. Cloudy, with a high near 39. Chance of precipitation is 70%.

Snow likely, mainly before 2am. Mostly cloudy, with a low around 30. Chance of precipitation is 60%.

A chance of snow before 8am. Partly sunny, with a high near 45. Chance of precipitation is 30%.

Partly cloudy, with a low around 29.

Mostly sunny, with a high near 46.

Mostly cloudy, with a low around 36.

Partly sunny, with a high near 62.

Partly cloudy, with a low around 48.

Mostly sunny, with a high near 71.