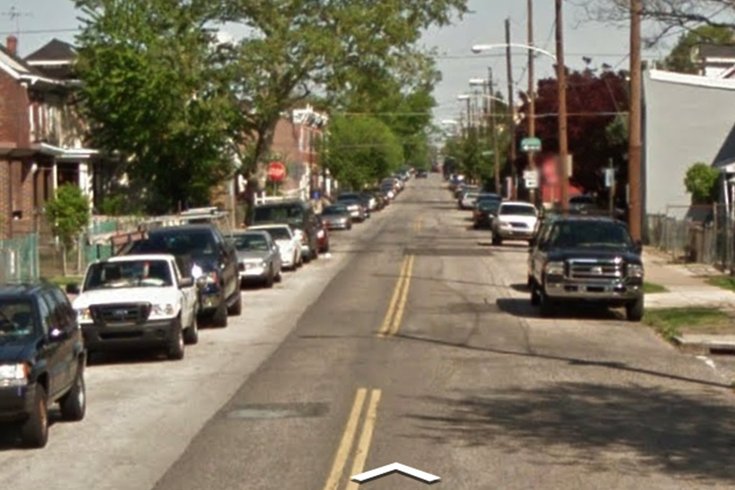 The 4800 block of Knorr Street in the Tacony section of Northeast Philadelphia.

Philadelphia police are investigating a threatening letter with targeted racist threats against new neighbors who recently moved to the Tacony section of the city.

The letter surfaced last week on Facebook and quickly spread across the social networking site. The original user's post said the letter had been left at a home on the 4800 block of Knorr Street.

A screenshot of the full letter can be read below. (Note: The letter contains explicit, offensive language and threats of violence). 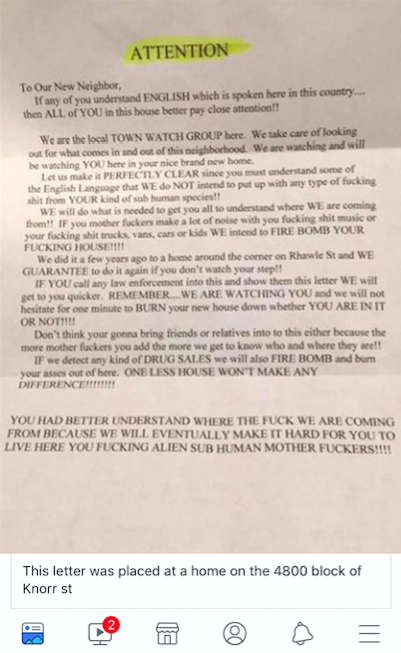 This threatening letter was allegedly placed at a home in the 4800 block of Knorr St. in the Tacony section of Northeast Philadelphia.

The letter writer refers to a "TOWN WATCH GROUP" that will be paying close attention to the new neighbors.

Whoever is behind the letter is not connected with Tacony-Holmesburg Town Watch, Inc., the president of the town watch told PhillyVoice on Monday afternoon in an email.

Tacony-Holmesburg Town Watch is a community-based, non-profit organization that bills itself as "the eyes and ears" of the Philadelphia Police Department. The group formed in Tacony in 1982 and expanded to cover Holmesburg in 2007.

"As the city of Philadelphia's oldest consistently running town watch, we would never send a letter intimidating or threatening residences in our community," said Joe Nicoletti, president of Tacony-Holmesburg Town Watch.

"Having said that we do not have any leads as to who sent those letters out. We can tell you that this is not the work of a community town watch, but the work of a person who has evil intentions," Nicoletti continued. "When we ask for community involvement, we do not discriminate against any age, sex, religion, race, or sexual orientation. We believe and strive for public safety and civility in our community. Our goal is to have a safe community for all families."

Philadelphia police did not disclose any information investigators may have learned over the weekend about the source of the letter.

"We are aware of the incident," officials said in a statement Monday afternoon. "At this time, there is an open and active investigation with Northeast Detectives."