Behind the scenes, unsung heroes make opening night a success

At the end of a live performance, a play's cast often takes a curtain call, walking downstage and giving a wave and a bow to the audience. But before, during and after the show, there's much more going on backstage than the audience could ever know.

From the wigs and costumes outfitting those in the limelight to the posters which first caught the ticket holder's eye, weeks and months of work go into each production. It truly takes a village to put on a show, and the technicians and designers standing in the wings help it go off without a hitch. 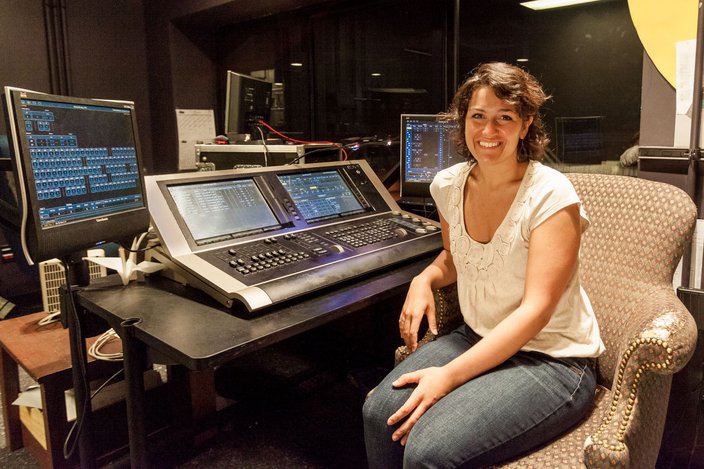 When an actor needs a spotlight or a scene requires day turning into night, it's the lighting supervisor who takes command. In a control room above the audience, a technician sits at a vast board of buttons and knobs, ready to play a lighting sequence for the night's show. As the Lighting Supervisor for the Philadelphia Theatre Company, Aly Docherty is responsible for illuminating the Suzanne Roberts Theater stage.

It takes up to two months for Docherty to prepare the lights for an upcoming show. That means taking the lighting designer's plot -- the plan explaining which lights go where, when -- and bringing it to life. After a week of intense technical rehearsals, Docherty cues the lights at showtime to make sure each one goes smoothly. Lots of problem-solving is involved, but that's one of the best parts.

Docherty also designs shows (her personal favorite being 2012's "Spring Awakening" for Mazeppa Productions) and works with the Koresh Dance Company as the Assistant Lighting Designer. That job involves touring with the company and adapting the light plot to the many stages they visit. Though that comes with many organizational challenges, Docherty enjoys working with dance performances, especially when they play with abstract ideas like Koresh does.

"I love watching dance anyway, but there’s something more free to me about being able to design for dance. It’s more creative, I think," Docherty said. 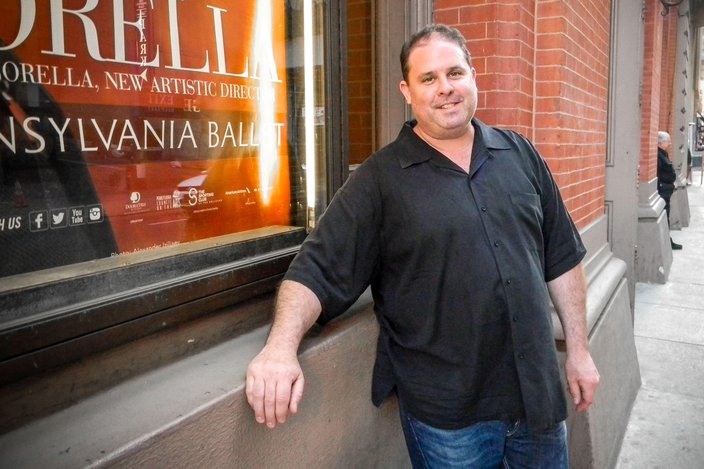 Pennsylvania Ballet is a graceful spectacle full of more tutus than you can imagine. But when a ballerina spins offstage looking for a flower or a sword or whatever they might need for the next scene, one man is responsible for having it ready. Daniel Amadie, the ballet's Property Master, guards a galaxy of knick knacks and supplies.

During each show, Amadie runs around backstage making sure each performer or crew member has whatever they need. At any one time, he might have tissues or chairs or blankets or scissors (lots of scissors, he says) on hand. In what Amadie describes as almost 200 square feet of space, he houses boxes and boxes of stuff.

Amadie also hunts down items he might need for future shows or makes them himself. He's always on the look out for things like old-fashioned baby dolls for the big party scene in "The Nutcracker" or fresh spring wheat to preserve for annual autumn shows.

For the ballet's most recent show, "A Tribute to Jerome Robbins," Amadie made a new newspaper look vintage by turning its color images black and white and aging the paper. For the show's "Fancy Free" segment, he turned amber gel and flower store foam into "full" mugs of beer.

"You never throw anything out because you’ll never know when you’ll need it," Amadie said. "I got stuff on the shelf that’s never been used, but I’ve got a lot of stuff that’s not on the shelf because I ended up using it." 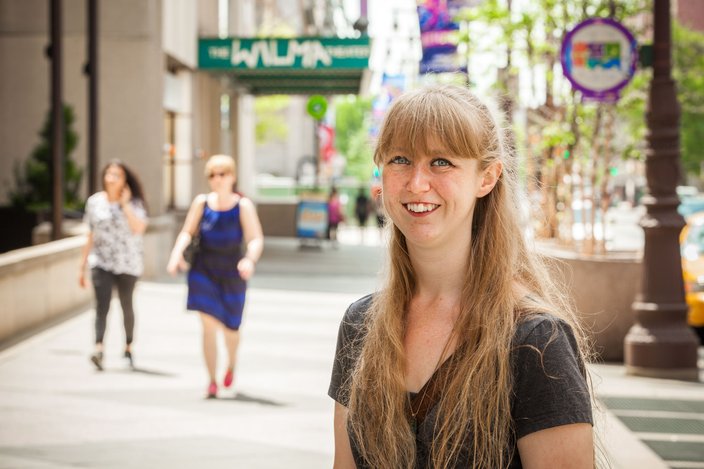 Like many who work backstage, Becca Austin grew up wanting to become an actor. But when a semester abroad in London immersed Austin in theater, she decided acting wasn't for her. Instead, her love of theater drew her to the costume department.

Since graduating from Arcadia University -- where she has taught the same class where she once honed her skills -- Austin has worn many different hats in the wardrobe department. She's worked as a costume technician, designer, assistant designer, stitcher or wardrobe supervisor for local companies like The Bearded Ladies Cabaret and Tribe of Fools.

Now, as the Wardrobe Supervisor for The Wilma Theater, Austin helps costume designers realize their imaginings. From sourcing garments to alterations to scheduling fittings, she acts as liaison between the designer and the company. Though she enjoys designing, citing Roberto Capucci's sculptural work as an influence, Austin finds bringing others' designs to life particularly satisfying, especially for such a close-knit theater like the Wilma.

"The actors all have a really good rapport together and they know each other pretty well and there’s a lot of respect.

They also have a lot of fun at work. One mystery coworker secretly leaves Austin drawings of gnomes, like the ones tattooed on her feet, in her office.

"It lends a sense of whimsy and family to it!"

Fans may remember when The Opera Company of Philadelphia suddenly became Opera Philadelphia in 2013. The Opera had been heightening its creative and aesthetic ambitions for years and needed a new look to match. Karma Agency helped rebrand the company, and Creative Director Ford Haegele really made his mark on the project.

Literally. The Opera's logo, or its "mark," was written in Haegele's own hand.

Haegele's work with the brand, including his incredibly striking production posters, has helped reestablish public perceptions of the company. A spirited, modern attitude has replaced a traditional, elitist reputation.

Truly working under his mantra, "imperfection is perfection," Haegele's iPad-and-stylus sketches sometimes end up in finished work. The poster for "Yardbird," for instance, began with a line drawing of saxophonist Charlie Parker that's present in the final product. Layers of images fill out the illustration, a theme used throughout the 2014-2015 season representing the complex art of opera.

Next season's materials take a different route. Haegele -- who's also worked with Nike and Fila and is currently working on two children's books -- pared down the designs, using a distinct color palette to tie it all together.

"I was very inspired by some of the works of Matisse, and just how he was so good at taking a simplistic form but giving it energy and making it stand out on the page," he said.

The painterly look certainly reflects the 41st season's theme: The Voice of the Human Spirit. 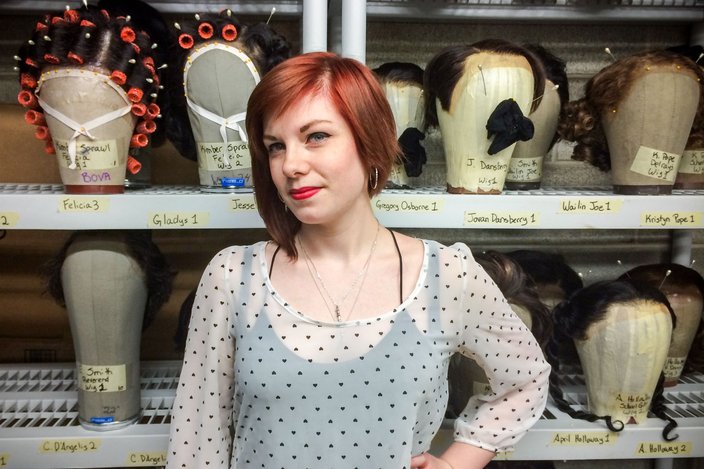 Cate Broomhead with the wigs of the Walnut Street Theatre. Aubrey Nagle/PhillyVoice

While humidity may be the bane of many women's existence come summertime, it's a boon to Cate Broomhead. As the Wig & Wardrobe Apprentice for the Walnut Street Theatre, Broomhead must groom the wigs for each night's production. When hair is attached to a lace cap and not a warm human head, it turns out, a little humidity is ideal.

Before each show, Broomhead descends into the WST basement and styles a selection of wigs lined up like so many flowers in a garden. While a wig designer dictates what each one should look like, Broomhead is responsible for keeping each curl and wave in check. As showtime approaches, she pins them in place on the actors' heads. (And yes, she finds the pins everywhere.)

"I look at it kind of as the final piece of the character that the actor puts on," Broomhead said. "Yes, they do all the acting and put the emotions into it, but without makeup, hair and costumes, the character isn’t complete to the audience."

"Memphis," a show set in the 1950s running at WST through June 12, requires 33 different wigs, three for the female lead alone. For Broomhead, a lover of old-fashioned hairstyles, the voluminous swoops and victory rolls on the show's toppers are a treat. Her favorite periods are the 1920s and 1930s, but says those looks are easier to recreate on a wig than her own head.

After stints in commercial cosmetics and television, Broomhead is now happily settled in at WST.

"This has always been where I wanted to be. I feel like I’m home." 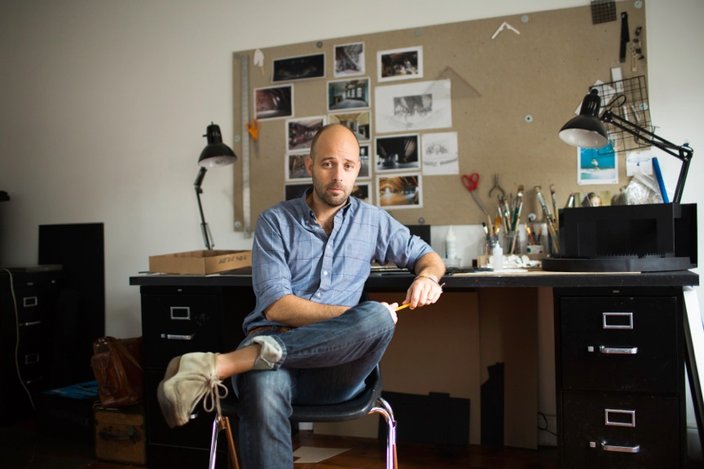 Matt Saunders, in his personal studio. Photo by Ryan Collerd.

Storied American scenic designer Robert Edmond Jones called a stage designer "a jack-of-all-trades" and "an artist of occasion." Jones lived through the early 1900s, a period when scenic design began shifting from two dimensions and into three. This time of change has strongly influenced the work of Matt Saunders, though his passion for theater began way before his Yale design degree.

In high school, Saunders was cast as in "Robin Hood" as Will Scarlet, a character meant to sit in a tree for parts of the performance. The school didn't have much of a set budget, so Saunders stayed late after rehearsal to build himself one out of a ladder, chicken wire and paper mache.

Fast forward to today and Saunders has created sets for productions all over the country, from LA to NYC and, of course, Philly. Whether working on devised work with local companies like New Paradise Laboratories, of which he is a founding member, or designing the Wilma's "Hamlet" stage, Saunders agrees with Jones.

"At any given moment a set designer may be called upon to be an architect, an engineer, a painter, a bridge builder," he said.

With established plays, Saunders acts like a dramaturge, too, working with the director to dive deep into the text. Rather than impose visual arts onto a story, he allows the words to inform its look, "trying to manifest the essence of the play into the visual environment," he said.

But with original works, the process is reversed. "I’ll sort of design the thing before we even have a script, you know? So the design ends up writing some of the piece," he said.