Rachel Hall nearly died after being struck by a car in North Philly in 2015; her recovery continues 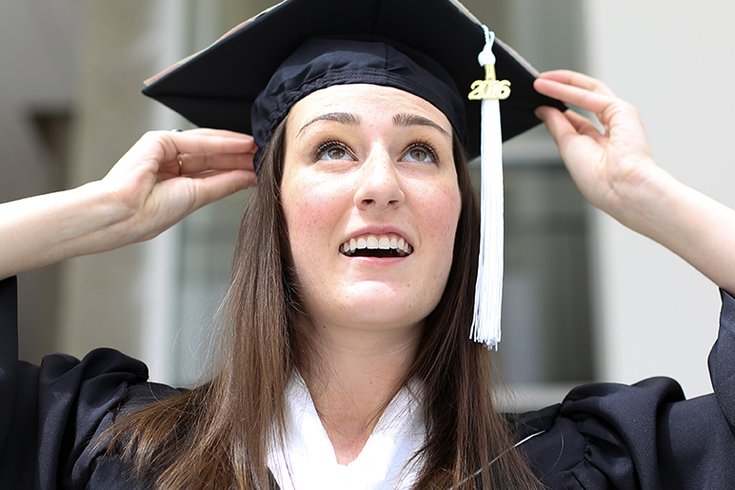 Rachel Hall was nearly killed by a hit-and-run driver days before she was to graduate from Temple University last year. In May, she donned that cap and gown and walked in graduation. She will be honored for her perseverance in South Jersey this week.

Rachel Hall, the 23-year-old woman nearly killed in a hit-and-run just days before she was scheduled to graduate from Temple University last year, will be honored with a proclamation in South Jersey this week.

The Gloucester County Board of Chosen Freeholders will recognize Hall, who battled back from the brink of death to finally walk at commencement last month, “for her strength in overcoming a life-threatening injury” at its Wednesday night meeting in Woodbury.

Hall, whose mother Kathy said is “improving day by day,” grew up in nearby Mullica Hill and attended Clearview Regional High School before pursuing a double major in sociology and criminal justice at Temple.

“Rachel’s attitude is, ‘There are hard days, but even before this, I was always a positive person. To me, there’s no reason to get upset about something. There’s no reason to look at the bad side of things,’” reads the proclamation brought about by Freeholder James B. Jefferson.

Jefferson told PhillyVoice on Monday that he's never met Hall but kept apprised of her recovery through the news over the course of the past year. That she was able to walk at graduation this year was the inspiration he needed to bring about the proclamation.

"I thought it was fitting that representatives of Gloucester County recognized the hard work that it took for Rachel to recover from such an ordeal," he said, noting that he, like lacrosse-playing Hall, was a student athlete. "It's a shame to see someone who does so much good have something like that happen. She's a fighter."

Jefferson noted that the proclamation will be read at the beginning of the meeting, which starts at 6:30 p.m. Hall will have the opportunity to say a few words after the proclamation (which appears below) is read onto the official record. 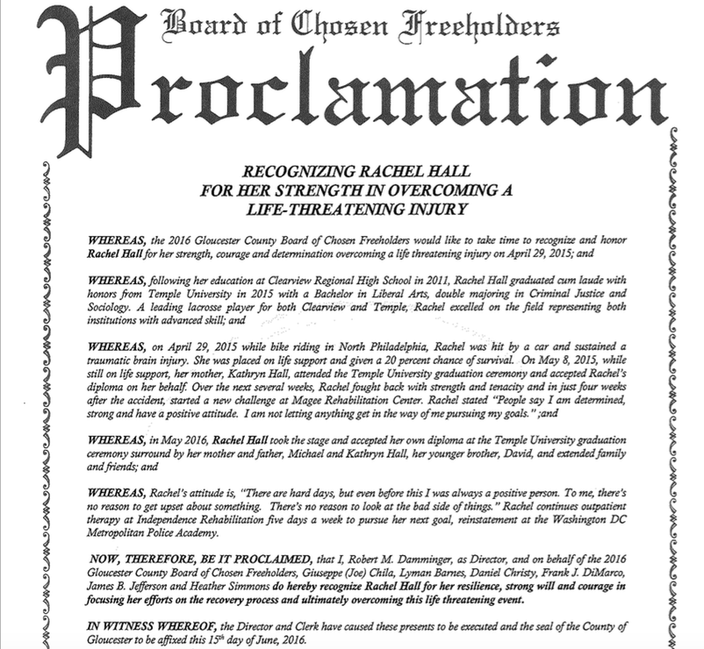 The driver – Rashan Roberts, 18, who was using a learner’s permit at the time of the crime – turned himself in when an arrest warrant was issued days later. He pleaded guilty and was sentenced to 11-to-23 months.

Hall still faces medical bills topping $1.4 million and the ongoing need for outpatient therapy, so supporters have set up a YouCaring fundraising page on her behalf.