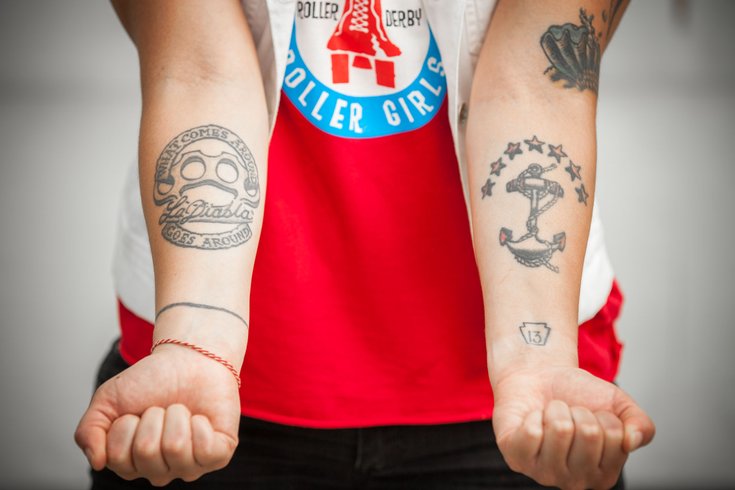 The female-dominated sport of roller derby has certainly evolved since it began officially in the 1930s. But from its popularity surge in the 1970s and 1980s to its revival in the 2000s, one thing has remained the same: those girls are tough.

But the women of Philly Roller Derby (which recently changed their name from Philly Roller Girls in order to be more inclusive) are also endearing, sweet and fun. Plus, they're competitive, ranked ninth out in the 254-league rankings of the Women's Fast Track Derby Association.

Many of them are also covered in tattoos and, like all good ink, each mark has a story of its own. Meet some of the Philly Roller Derby (PRD) players below and hear their tat tales. Then be sure to catch them kick butt at their next home bout Sunday, July 26.

All photos by Thom Carroll. 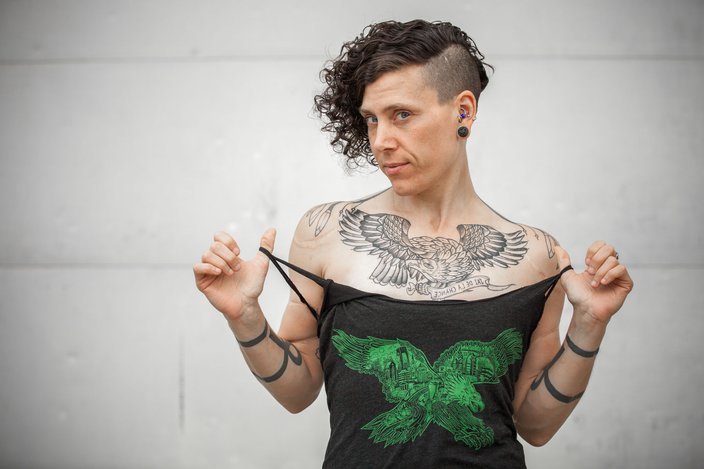 Real Name: Mishel Castro
Time with PRD: 10 years
Her Favorite Philly Spot: Rocket Cat Cafe, the Kensington coffeehouse frequented by PRD players. "It's like derby 'Cheers,'" Castro said.
Her Tattoo: A majestic eagle holding a banner marked with the French phrase "j'ai de la chance," which translates to "I'm lucky," on her chest.
The Story: Castro said the eagle is her spirit animal. (Hence, why she is also wearing a Philadelphia Eagles shirt!) But like a nickname, Castro didn't just choose the eagle; it was given to her by friends who felt a characteristic resemblance. "They're focused, diplomatic," she said. 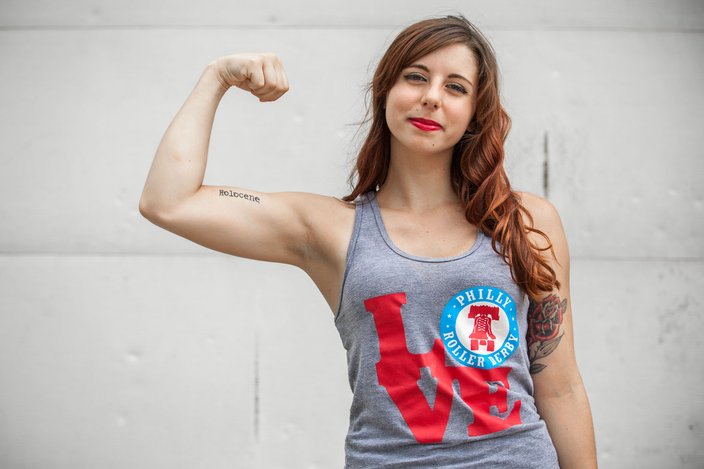 Real Name: Victoria Smith
Time with PRD: One year, before which she was the Junior Roller Derby Association national champion.
Her Favorite Philly Spot: Drexel Park, where she likes to hang out and hula hoop when she isn't studying Chemistry at Drexel University.
Her Tattoos: The word "holocene," the name for our current geological epoch, is written on Smith's right bicep (above). A large owl illustration (below, left) can be found on Smith's right thigh.
The Stories: Since humans will never know what comes after the holocene epoch (we'll have become extinct) the word reminds her to live in the moment and that we're all small fish in a big pond. The owl is constructed out of mandalas, a Hindu and Buddhist symbol of the universe. She got it to commemorate her late grandfather, she said: "He was a hoot! And hard of hearing." 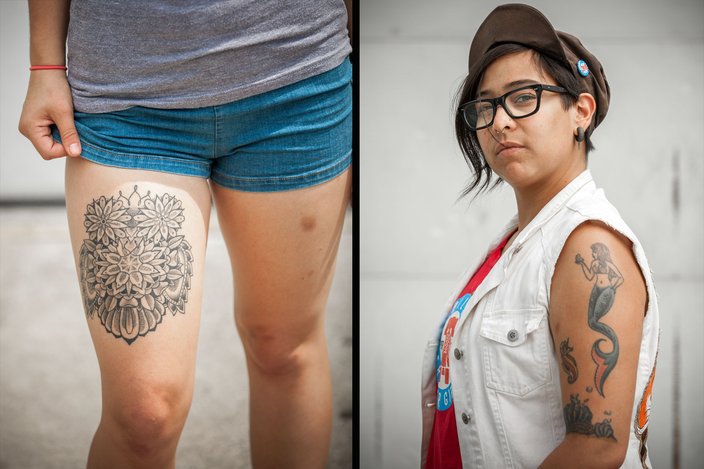 Real Name: Dubraska Sosa
Time with PRD: Three years
Her Favorite Philly Spot: The Philadelphia Museum of Art Sculpture Garden for its tranquility and beauty.
Her Tattoos: A set of brass knuckles set with the words "what goes around comes around" and "La Diabla" on her right forearm and an anchor on her left forearm (below). Her left upper arm, (above, right) features a mermaid, a unicorn seahorse and sea clams. 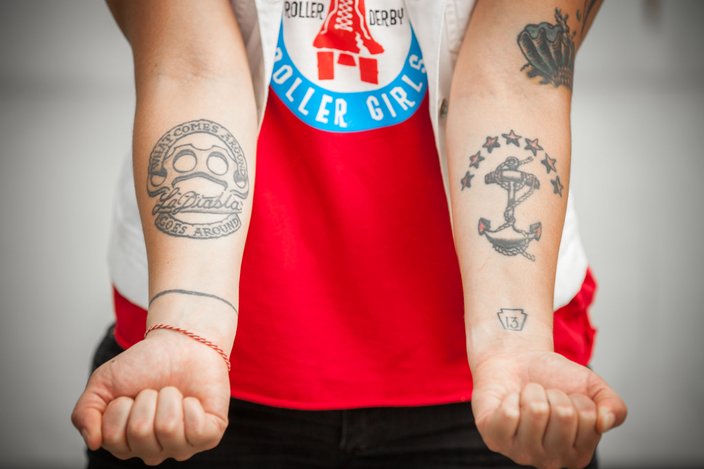 The Stories: When Sosa skated with Pittsburgh's Steel City Roller Derby (where her derby name was La Diabla) she and her fellow skaters received free tattoos after winning a bout, hence the brass knuckles. The nautical-themed tattoos on Sosa's left arm all represent her upbringing in by the beach Venezuela. Eventually, she will link her seaworthy tattoos into a half sleeve design. 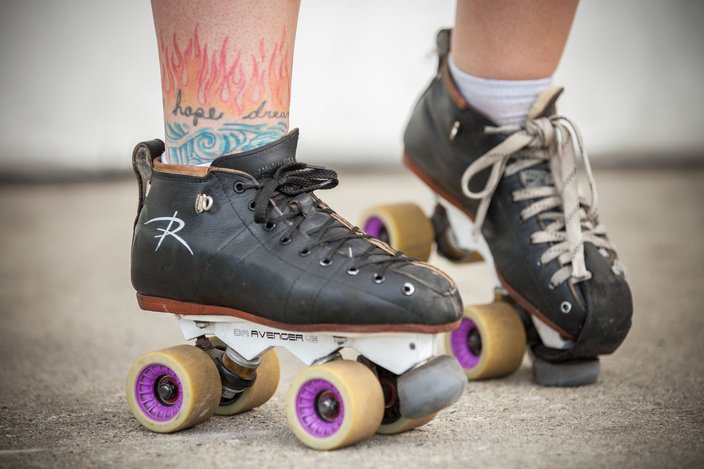 Real Name: Heather Kuiper
Time with PRD: 18 months
Her Favorite Philly Spot: The Philadelphia Museum of Art, where Kuiper likes to hang out in its serene gallery spaces and Impressionist exhibits.
Her Tattoos: A ring of fire and water with the words "hope" and "dream" on her right ankle (above), as well as a cross of two hammers with the initials "H. C. R. G." (below, left).
The Stories: The words written in cursive on Kuiper's ankle serve as a dash of inspiration while the crossed hammers remind her of her time with the Hammer City Roller Girls in Hamilton, Ontario. She and 17 of her teammates got them together as a team tradition, shortly before Kuiper moved away! 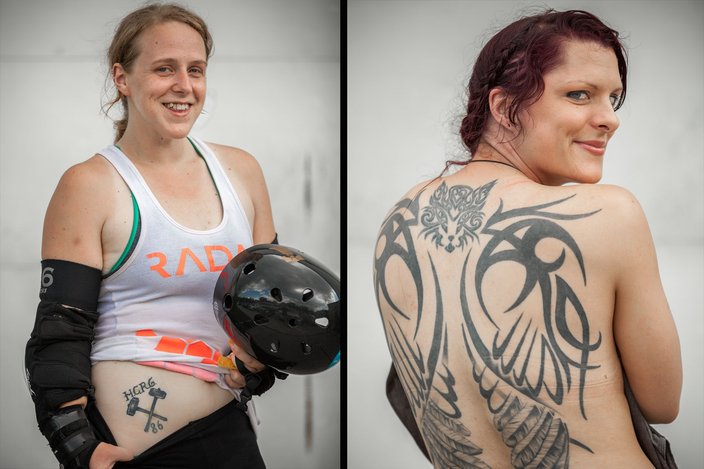 Real Name: Leah Yancoskie
Time with PRD: One year
Her Favorite Philly Spot: Pizza Brain, where she loves the "Jane" pie.
Her Tattoos: A sprawling pair of wings on her back topped by an abstract cat illustration (above, right).
The Story: For Yancoskie, the wings symbolize freedom and liberation. The transition of the wings from a flat, tribal design to a more three-dimensional feather design toward her lower back stands for Yancoskie's personal transformation. She hopes to continue the wings' visual themes into new tattoos featuring birds and insects on her chest. 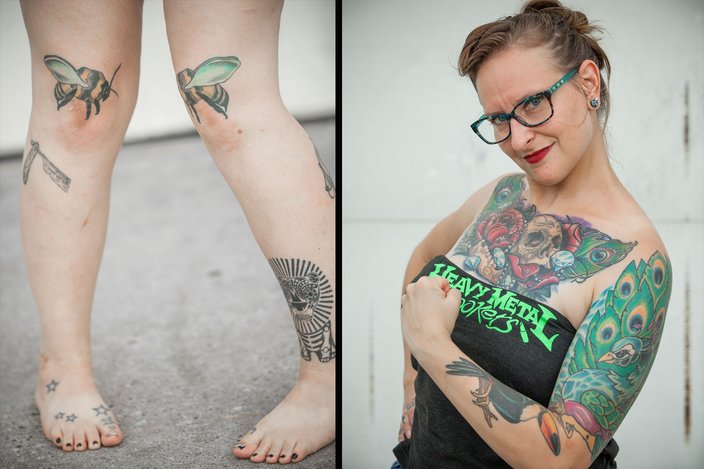 Real Name: Kimberly Donahue
Time with PRD: Four years
Her Favorite Philly Spot: Anywhere with a bit of grass to kick back on.
Her Tattoos: A colorful wreath of skulls, roses, diamonds and peacock feathers on her chest, a peacock and a toucan on her left arm and a bee on each knee, among others.
The Stories: Donahue loves a good pun, so she has "bee's knees" and a small camel on her big toe. Her chest tattoo, which uses her favorite visual motifs, was done in a marathon session by award-winning tattoo artist Steve LaMantia. It was completed in 14 hours over three days at a tattoo convention in New York. 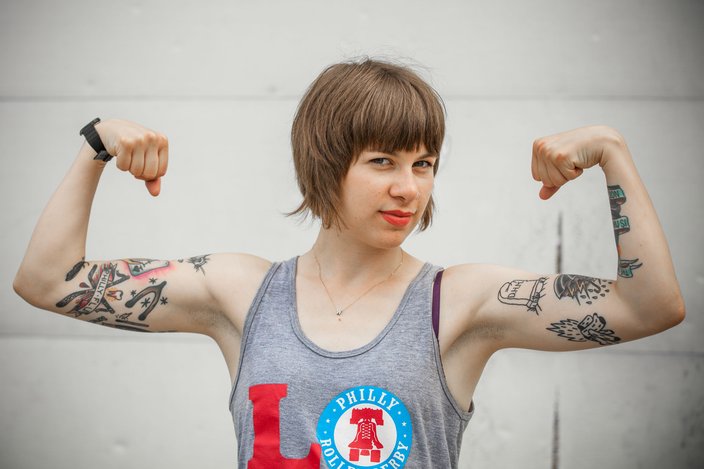 Real Name: Willa Rae Culpepper
Time with PRD: Ten months
Her Favorite Philly Spot: The Liberty Choice grocery store under the El in Fishtown. A frequent traveler, Hunting likes that similar convenience stores can be found all over the world in otherwise disparate locations.
Her Tattoos: Myriad colorful illustrations of everything from a rabbit to a stormy umbrella (above). Her left and right ankles (below), respectively, feature the skylines of London and New York, while her right calf features a mythical flying creature surrounded by the words "Hell is empty/all the devils are here."
The Stories: Some of Culpepper's ink is inspired by her travels, but the crest on her right calf comes from her studies in genocide prevention. The phrase, which is a slightly abbreviated quote from Shakespeare's "The Tempest," was the title of her master's thesis. It serves as both a reminder of the everyday evils around us and a symbol of her mother, a Shakespearean scholar. 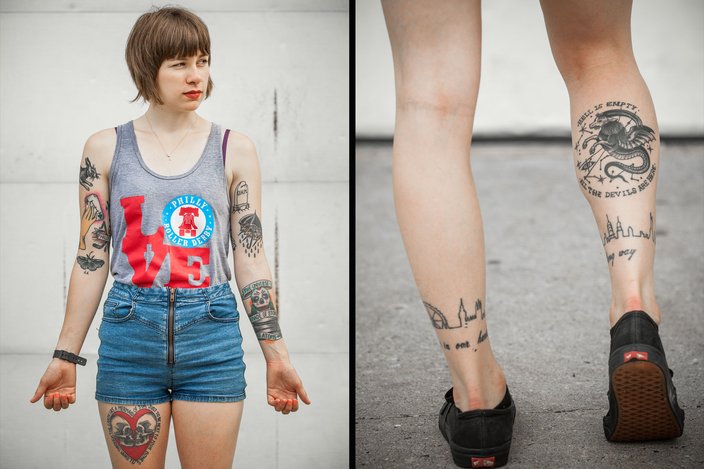