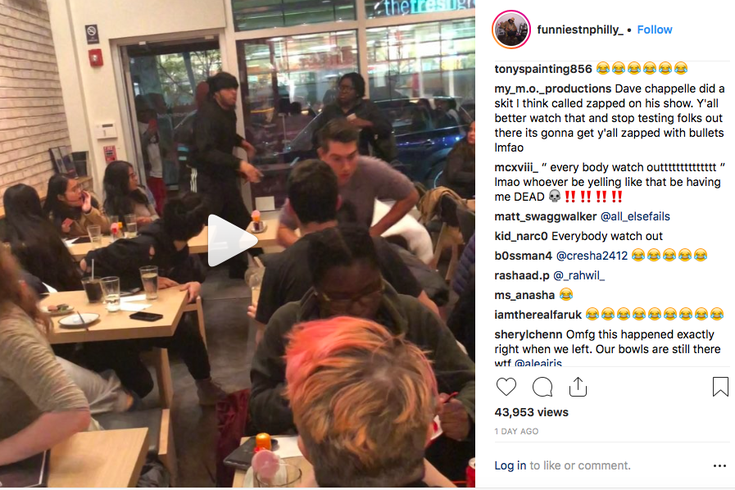 An incident staged to appear as though someone was stabbed inside a University City restaurant on Tuesday night left fearful diners stunned and scrambling as the pranksters filmed a clip for their Instagram and YouTube accounts, according to a report.

The incident, captured below in a Instagram post, occurred around 7:30 p.m. at Terakawa Ramen, 126 S. 40th St., according to The Daily Pennsylvanian.

Witnesses said a teenager ran into the restaurant dressed in what appeared to be a blood-soaked t-shirt. As the apparent victim asked for help, another male entered the restaurant and carried himself as if he planned to stab or shoot the first man.

"Funniestnphilly," the Instagram account where the video was posted, has more then 235,000 followers. A YouTube channel with the same name has about 180 subscribers. Both accounts are filled with similar prank videos.

One video posted on Wednesday from New Castle County, Delaware, shows a man in a restaurant loudly accusing a woman of a cheating on him with another patron, causing a disturbance as employees intervened.

An email sent to the address listed on the Instagram account was not immediately returned on Thursday afternoon.

Witnesses at Terakawa reportedly fled through the back door and overturned tables, leaving their phones and other belongings in the restaurant until police arrived at the scene. Authorities later explained to returning patrons that the incident was a prank.

Philadelphia police did not immediately respond to a request for further information about the incident, including why the pranksters were not charged with any crime.

The owner of Terakawa Ramen was not available to comment on whether or not the restaurant plans to pursue legal action against the pranksters. An employee who answered the phone told PhillyVoice he had a full view of the pranksters entering the store on Tuesday night.

"I saw them standing outside before they came in," the employee said. "I could tell something was a little off about it, but it was still very shocking."