Then and Now: A look back at the changing face of the Philadelphia Navy Yard 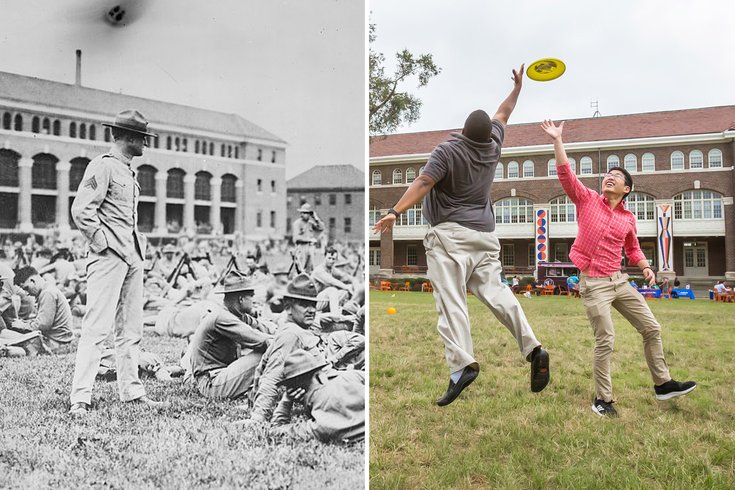 The Philadelphia Naval Shipyard that Peter Dankanich, 84, started working in more than five decades ago isn't the same one that's there today.

Dankanich, who was born and raised in South Philadelphia and now resides in Pitman, New Jersey, landed his first gig there as a warehouseman during a mass hire in February 1966 after serving in the Air Force.

The Naval Shipyard, now just referred to as the Navy Yard, is a place that Dankanich remembers as being "as busy as a beehive" until he retired in 1991.

Busy would be an understatement.

The Navy Yard, which opened the same year the nation was founded in 1776, continued to operate as a U.S. naval base until the mid-'90s. It saw more than 40,000 employed there during its "peak production period" while the country fought in World War II.

Its workforce repaired more than 1,200 ships and built 53 warships between 1876 and 1996, when the Navy Yard ceased operations.

Now, the Navy Yard is operated by the Philadelphia Industrial Development Corp. and employs about 13,000 across its 1,200-acre campus that houses more than 150 companies, including Urban Outfitters Inc., Tasty Baking Co. and GlaxoSmithKline.

It's also home to Philly Shipyard Inc. – the only commercial shipyard in the region.

"Oh, there's a whole world of difference," Dankanich said. "Since they closed the shipyard, all them buildings were made into a civilian operation now. There's all kinds of business."

Jennifer Tran, spokesperson for the PIDC, said that additional growth for the Navy Yard is imminent while more companies choose the spot for their headquarters. Looking ahead, the Navy Yard could eventually have its own stop on the Broad Street Line as well as residential properties so people can live and work in the area.

The Navy Yard is also one spot that the city is pitching to Amazon while it searches for a place to build its second North American headquarters.

"The story behind the Navy Yard is really unique, and I think that businesses see this as an opportunity to stay in Philadelphia, to continue growing," she said. "There's been a lot of terrific stories."

Below is a collection of side-by-side images that show the changes that the Navy Yard has gone through in the past several decades. The photos are courtesy of the Temple University Libraries Special Collections Research Center as well as the Library of Congress.

It's a glimpse into what Dankanich once saw during his commute into work and what Tran sees now. 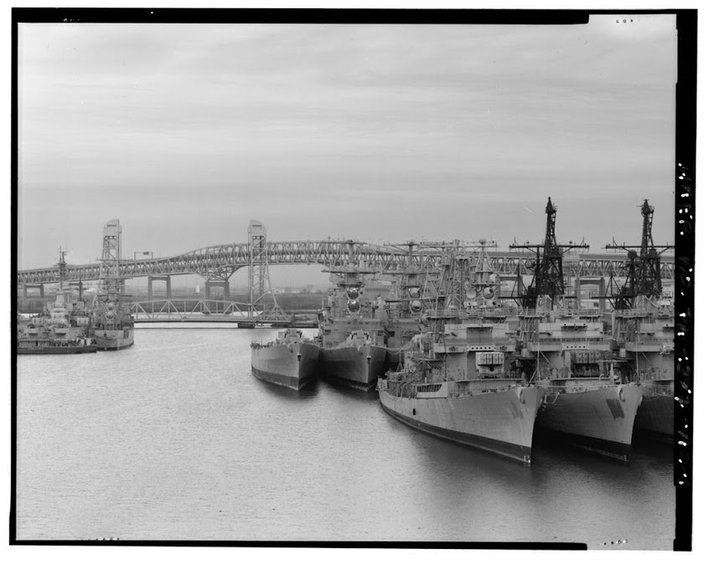 Ships docked at the Navy Yard. The photo was included in a collection compiled by the Library of Congress after 1968.

Although the U.S. Navy has scaled back its operations at the Philadelphia Navy Yard, it currently operates a Naval Inactive Ship Maintenance Facility, (or NISMF), where inactive ships are held while their final fate is determined. 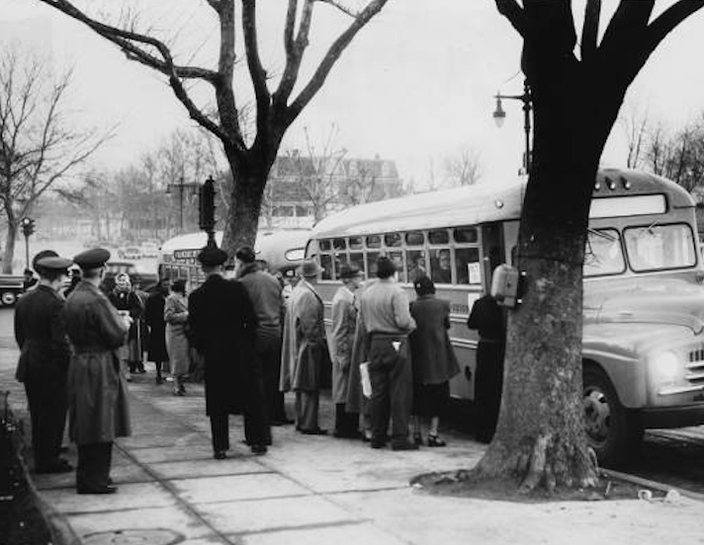 Commuters heading to the Navy Yard board the bus at Broad Street and Stenton Avenue in 1953 during a Philadelphia Transportation Co. strike. 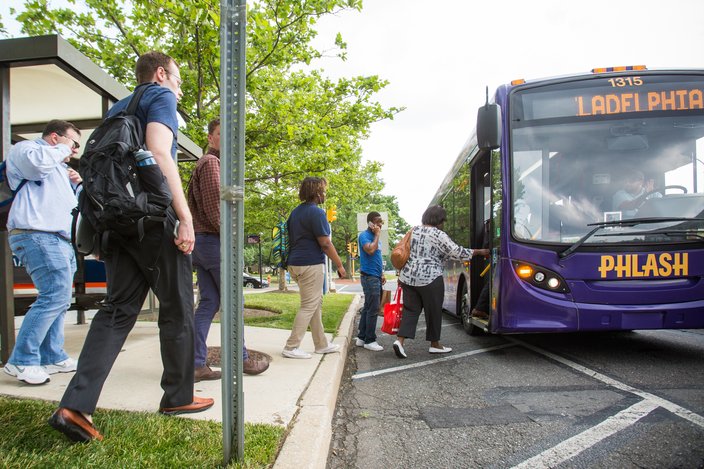 Employees at the Philadelphia Navy Yard board a shuttle bus near the entrance to the Navy Yard at the end of a work day. 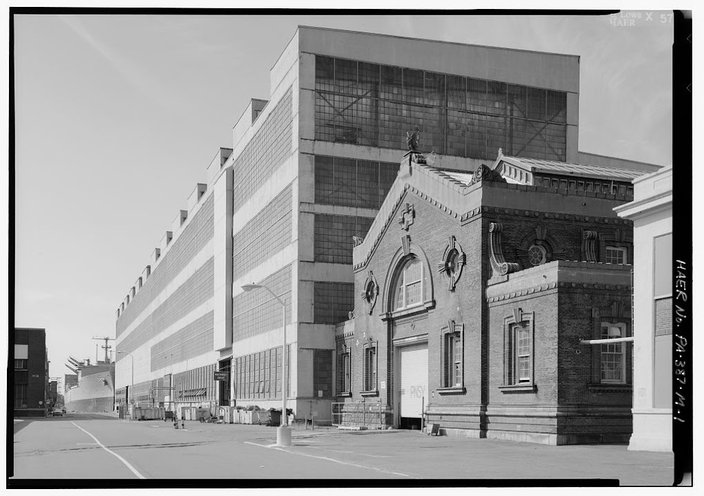 Machine shops on League Island at the Navy Yard. League Island was the name of a piece of land along the Delaware River. The water channel between the island and the rest of South Philadelphia formed together and created the Navy Yard as it's known now. This photo was included in a collection compiled by the Library of Congress after 1968. 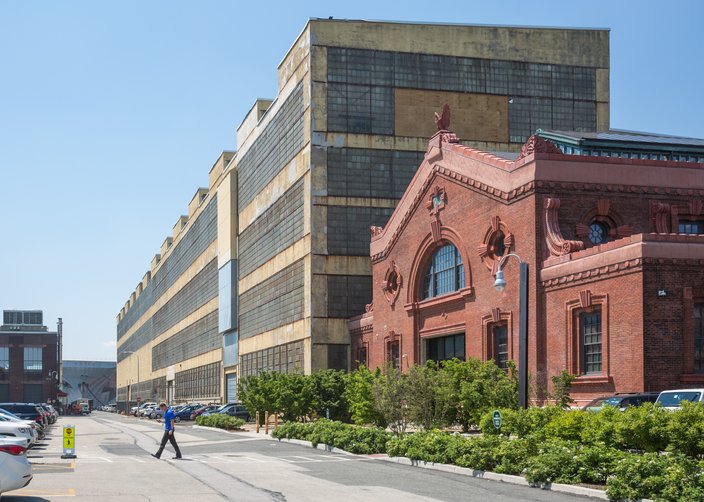 The Navy Yard is now home to more than 150 businesses. 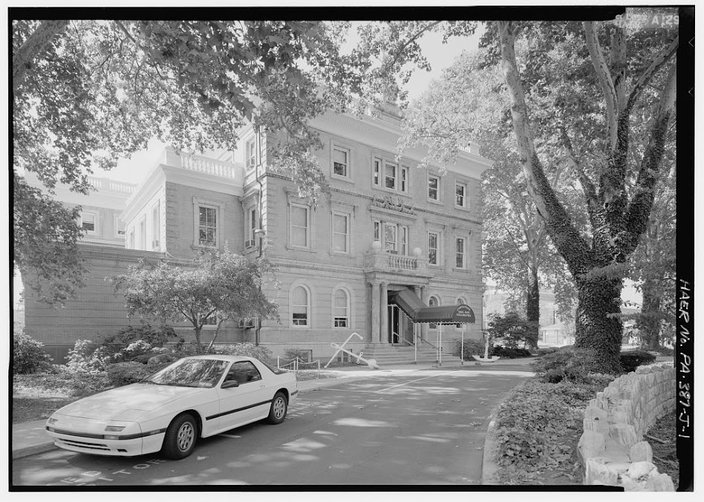 A car sits in front of the Commandant’s Building at the Navy Yard. The photo was included in a collection compiled by the Library of Congress after 1968. 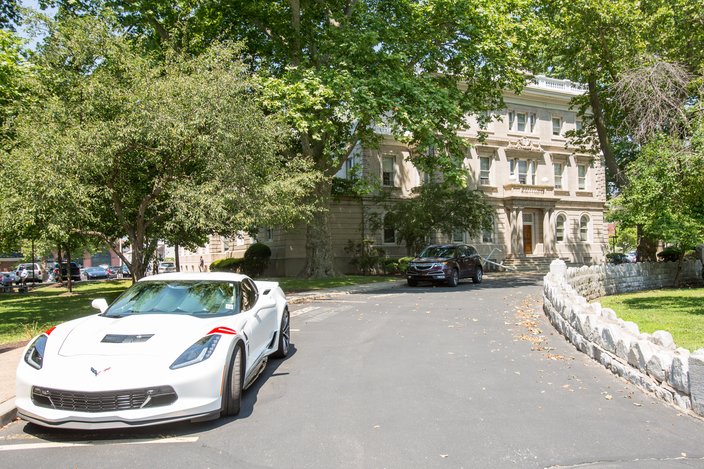 The Commandant's Building on South Broad Street at the Philadelphia Navy Yard. BMT Syntek Technologies, of BMT Group, an international engineering consultancy, opened an office within the Commandant’s Building in 2013. 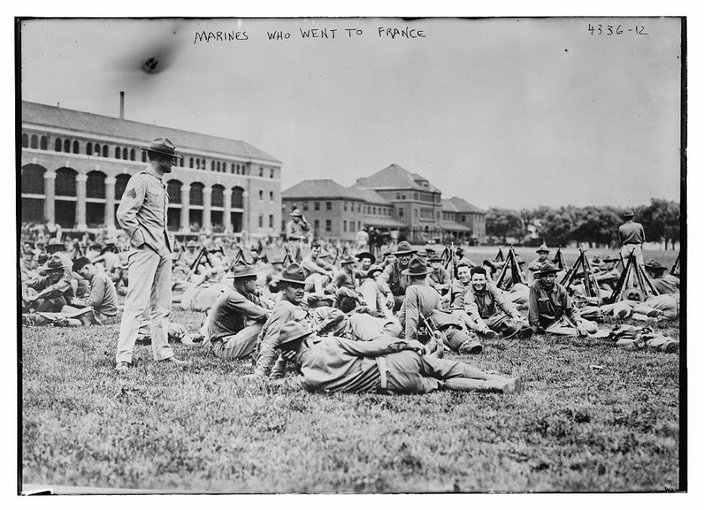 World War I Marines in front of the Marine Barracks at the Navy Yard in 1917. The building seen behind the soldiers was added to the National Register of Historic Places in 1976. 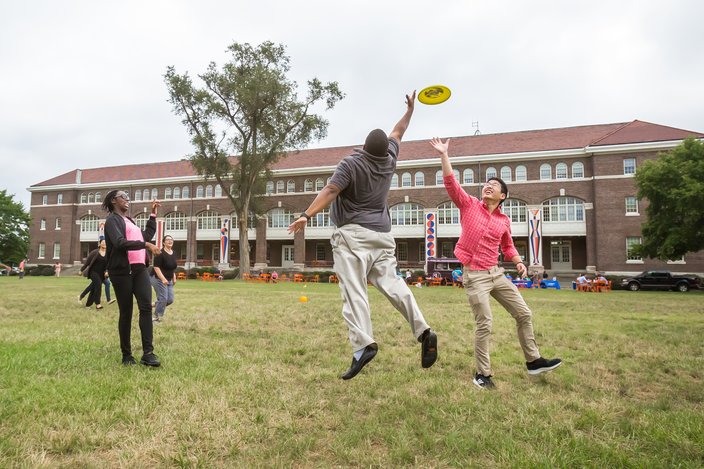 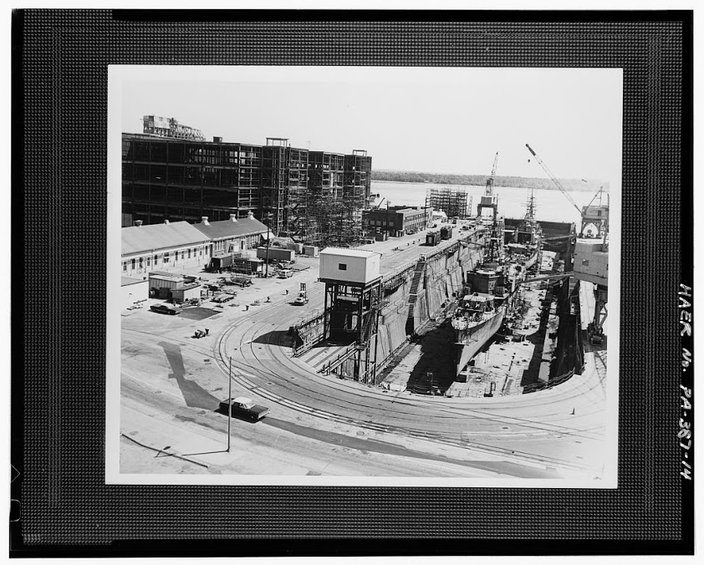 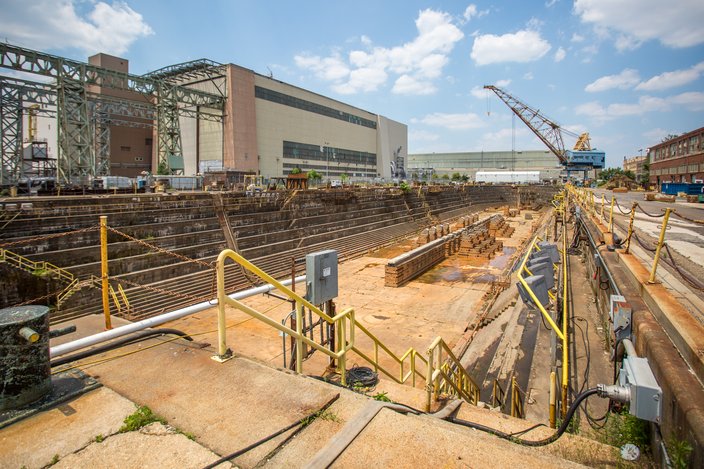 Dry Dock No. 3 at the Philadelphia Navy Yard is operated by Rhoads Industries. 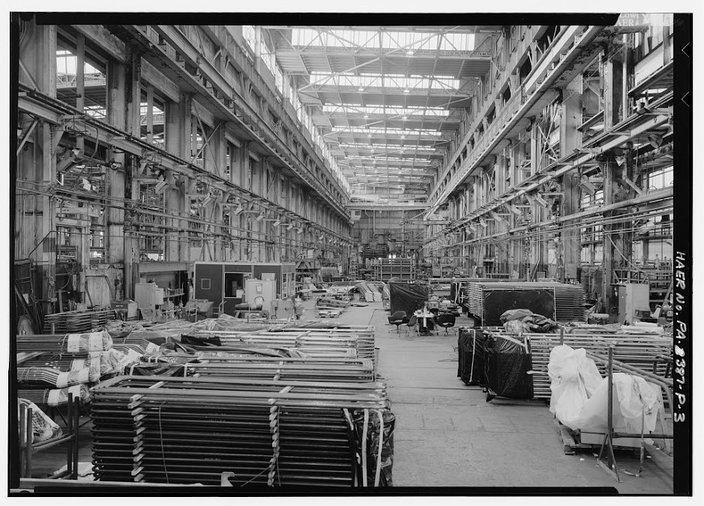 Tube bending shop in the Philadelphia Navy Yard's boilermakers department. This photo was included in a collection compiled by the Library of Congress after 1968. 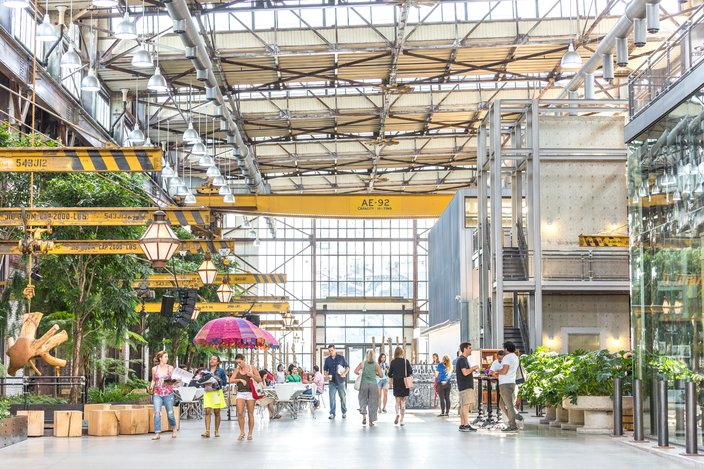 The Urban Outfitters Inc. headquarters is based at the Philadelphia Navy Yard. Urban is one of more than 150 companies found there.