More than 100,000 were without electricity on Pennsylvania on Friday morning, according to PECO 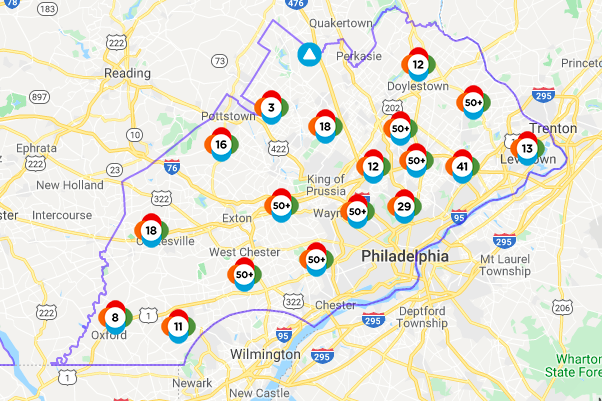 Power outages in the region.

Strong thunderstorms and winds on Halloween night pushed in a cold front through Pennsylvania. The National Weather Service issued a wind advisory in the region until 12 p.m. Friday.

At 8 a.m., more than 100,750 were without power in the Philadelphia region, according to PECO's outage map. The outages were  due to collapsing power lines and falling trees.

Bucks County was particularly hard hit, with more than 39,360 customers without power on Friday morning. Chester, Delaware, and Montgomery counties also had thousands of outages.

Service on nearly all SEPTA Regional Rail trains was delayed, suspended, or overcrowded Friday morning due to fallen trees and downed power lines. Service from Warminster and between Doylestown and Colmar were suspended until further notice and all lines were experiencing delays of up to 40 minutes, according to SEPTA's system status.

RRD: Warminster and Lansdale/Doylestown lines (between Doylestown and County) are suspended until further notice due to downed trees and Peco wire issues. Overcrowded conditions, skip stations and significant delays are possible.