Along with Drew Barrymore and Candice Bergen 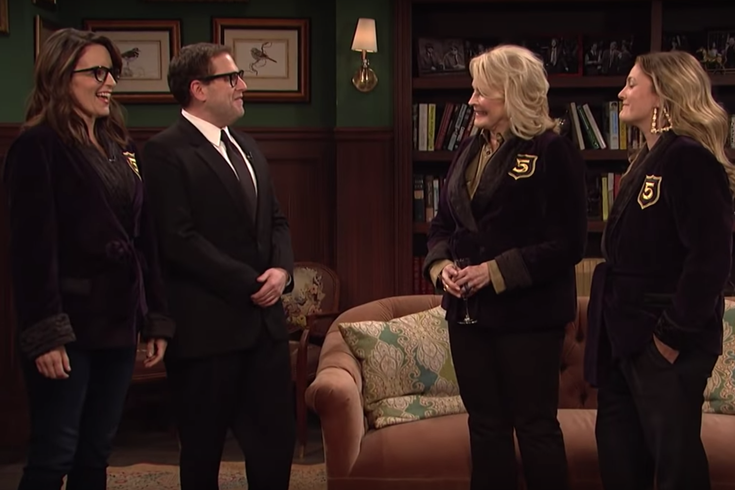 Tina Fey made a surprise cameo on "Saturday Night Live" this week to induct Jonah Hill into the "Five Timers Club" during his monologue.

This is Hill's fifth time hosting the show, so it makes sense that other SNL royalty might make a few cameos. In the bit, Fey brings Hill to the Five Timers Lounge, where they run in to Drew Barrymore and Candice Bergen — and where Keenan Thompson serves the drinks.

Hill joins the likes of Fey, Steve Martin, Dwayne "The Rock" Johnson, Alec Baldwin, and Tom Hanks as comedians who have hosted the show five times with the Nov. 3 episode.

The "Five Timers Club" bit wasn't just created this weekend, though. It's been a long-running gag between Martin, Justin Timberlake, and Tom Hanks that always starts with a ceremonious smoking jacket awarded to the new inductee.

The funny part about Hill's induction, though, is that all of those men have been banned from the club because of the #MeToo movement and #Time'sUp, according to the women in the lounge. Oh, and Hill's jacket is bedazzled with sequins.

While in the Five Timers Lounge, the women share their favorite of Hill's sketches, "Couples Quiz." It's a bit where he admits to clogging the toilet "and then later in the day I went on top of the clog," Hill tells his wife. It's a good one.