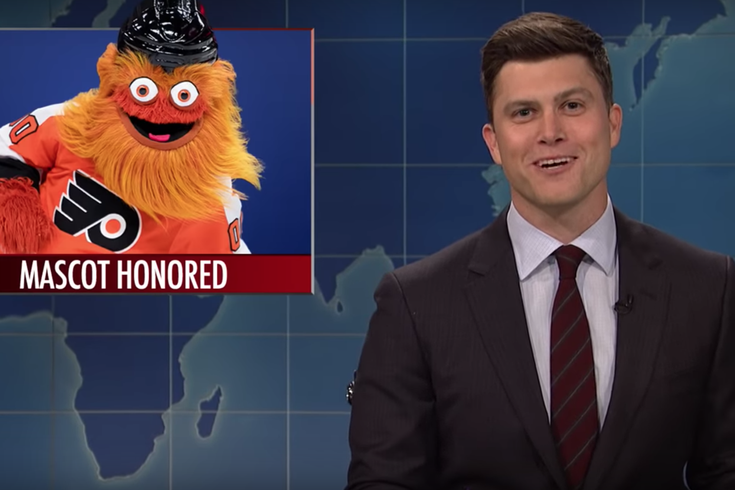 Colin Jost does a bit about Gritty on "Weekend Update" during the Nov. 3 episode of "Saturday Night Live."

You might have thought Gritty's popularity would die down weeks after he first made his debut, but you would be wrong.

The Philadelphia Flyers' mascot made yet another appearance on television this week with another mention on "Saturday Night Live."

RELATED: Tina Fey returns to SNL to induct Jonah Hill into the 'Five Timers Club' | Whereas, Philadelphia City Council honored Gritty on Thursday because Gritty totally rules | Everyone and their dog is dressing as Gritty for Halloween

During the Nov. 3 episode hosted by Jonah Hill, "Weekend Update" hosts Colin Jost and Michael Che made mention of Gritty and his recent honor at City Hall.

"After lawmakers passed the measure, Gritty kept his end of the deal by releasing their children."

And yes, this actually happened here in Philadelphia. City Council actually introduced a resolution (brought forward by Councilwoman Helen Gym) and passed it on Oct. 25 to honor “the spirit and passion that Gritty has brought to the City of Philadelphia and to the entire country, both on and off the ice."

You can read the entire text of the resolution here.