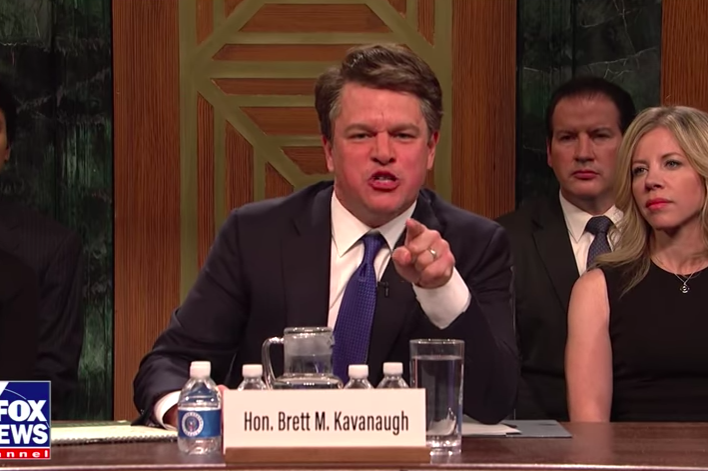 Matt Damon made a cameo on the season 44 opener to play Brett Kavanaugh.

The season 44 opener of 'Saturday Night Live' made its return to television this Saturday night with performances by Kanye West and hosted by Adam Driver.

The cold open was probably the highlight of the show. We got a cameo from Matt Damon, who gave us a pretty spot-on performance of Brett Kavanaugh at the Senate Judiciary Committee hearing last week. There was water drinking, sweating, screaming, calendars, and some crying. On an otherwise ordinary show, many are saying that Damon stole the spotlight.

Here are some more highlights from this season's first episode.

This is Driver's second time hosting on the show. His monologue was short, and a little unfocused. That's probably because he doesn't have any ongoing projects or films to promote, so there's wasn't much direction.

He did hint at some Star Wars spoilers but it didn't amount to much.

Weekend Update mostly focused on the Kavanaugh hearings, although they did include a few nods to Philadelphia. The Flyers' new mascot Gritty made it onto the show — or as Colin Jost called him, "the first mascot ever based on the crayon drawings of a five year old who saw his parents murdered."

Michael Che took on the Bill Cosby sentencing hearing that put the Philadelphia comedian behind bars for three to 10 years earlier this week. "Hey, hey, hey," he sadly opened in Cosby's signature.

Update also did some Pete Davidson and Ariana Grande jokes and brought in Leslie Jones as Serena Williams.

This sketch was among the funniest of the night. It's writer Kyle Mooney celebrating his sixth season on the show going unnoticed, especially after Davidson was in the spotlight all summer because of his engagement.

Mooney changes his appearance to look just like Davidson — bleached hair and all — and it's pretty funny.

Kanye brought in rising star Teyana Taylor for "We Got Love," which was just fine and pretty uneventful.

'SNL' announced this past week that 'Crazy Rich Asians' and 'Oceans 8' actress and singer Awkwafina will host next week with performances by Travis Scott. On Oct. 13, Seth Myers will host with musical guest Paul Simon.