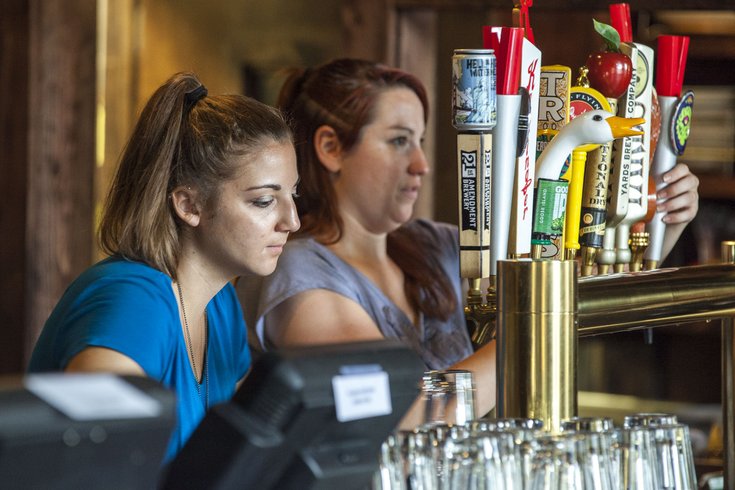 Nichole Hulse, left, and manager Meghan McDermott work at the bar during the day shift on Wednesday at William Street Common in University City.

No one likes tipping.

It’s an awkward, inequitable, and unreliable system of payment that, research shows, favors white people, slender women with blonde hair, and servers who touch their customers.

Many food service workers working for tips would like it better if there wasn’t also a minimum wage that allows their employers to pay them $2.13 an hour (an amount which has not been increased since 1990 — although it is $2.83 in Pennsylvania).

In recent years, restaurants that spurn tips have popped up in New York, Pittsburgh, Kentucky, Austin, Washington D.C., the Bay Area, and Seattle. In the last year two such eateries have opened up in Philadelphia, Girard Brasserie & Bruncherie and William Street Common.

But the no-tip impulse can hardly be said to be sweeping the food service and hospitality industries. Of the hundreds of thousands of restaurants in the United States, only a handful have done away with the practice.

What would it take for tipping to be abolished, or at least sharply curtailed?

According to forthcoming research, substantially higher minimum wages and the abolition of separate wages for tipped employees are undermining the practice in a few states on the West Coast.

“It’s becoming more and more common in San Francisco and Oakland and other places where the minimum wage really bites,” says Bill Lester, assistant professor of economic development at the University of North Carolina, Chapel Hill, who is conducting research on how strong local workplace standards affect the food service labor market. “That’s the trend we are seeing in the Bay Area. Five or six have opened this year who have gone tipless. It doesn’t make sense for them to compensate servers so much plus tips, so they just put a service charge on.”

Seattle, San Francisco, and Los Angeles have all passed laws raising their citywide minimum wage to $15 an hour, phased in over the next few years. Chicago raised it to $13 an hour, Oakland to $12.25 wrapped up with guaranteed paid sick leave. Some cities, like New York and Philadelphia, are prevented by state law from raising their own wages. State law in Washington State and California does not allow for a separate tipped minimum wage. 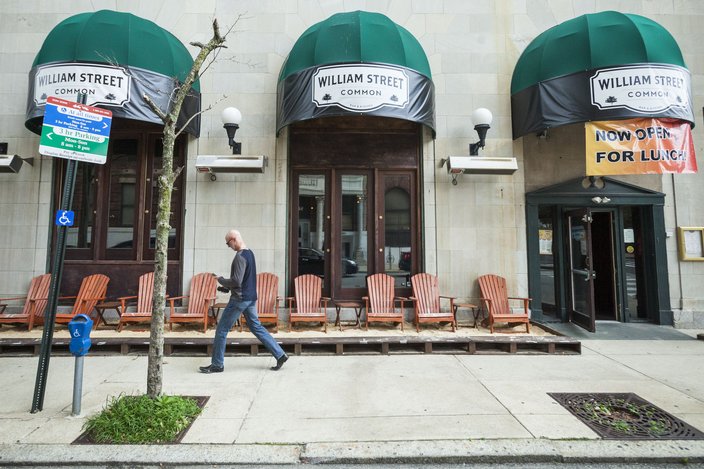 At William Street Common, an indoor beer hall/restaurant in University City, a 20 percent surcharge is added to the bill so patrons can clearly see how much of the check is going to workers. (Thom Carroll / PhillyVoice)

Lester’s research focuses on how local workplace standards affect the labor market in full service restaurants. He is comparing San Francisco with the Research Triangle in North Carolina: both regions with a large tech sector, a growing economy, and a roughly similar number of restaurants. But San Francisco has a $15 minimum wage, paid sick leave, and requires employers to provide health care or pay toward a larger public plan. Cities in the Research Triangle provide none of these supports.

The result, in San Francisco, has been a dramatic decrease in turnover in an industry defined by it. Lester argues that there is an increased sense that, as in European countries, food service can be a professional job. And, like European countries, that also means tipping can become a nicety, not something workers depend on for their livelihood. (There are no tip-free restaurants in the Research Triangle.)

The two no-tips-required restaurants in Philadelphia report similar results. Girard Brasserie includes the costs of labor in its prices and provides paid sick days, paid vacation, and wages at $13 an hour. Customers can leave an additional tip if they want, but it is not expected.

After eight months, restaurant co-owner Cristian Mora says there has been no server turnover.

“No, none at all. We’ve had to adjust as far as who has what positions but everyone who is working here has been working since the beginning,” says Mora, who has worked in the industry for 16 years. “That’s pretty wild. I have been a part of two other restaurant openings and both had a more than 50 percent staff turnover in their first year.”

At William Street Common, a 20 percent surcharge is added to the bill so that customers can clearly see how much of the check is going to the workers – even if they can’t change the amount or percent. Additional tips are not allowed. All staff are paid at least $15 an hour no matter what, although there is the possibility of higher pay if the restaurant does particularly well on a given night. Paid sick leave is also provided.

But neither Mora nor Hornik have heard of any other Philadelphia restaurateurs who are considering higher wages rather than tips for their workforce. Both report that they received numerous inquiries about their tips-free models, but all of the interested parties were from outside the city.

“I don’t think it will go deeper into the market share without some kind of a mandate,” says Lester. “It takes some kind of a shock to the system to make people take up a new practice. The $15 minimum wage in San Francisco acted as that shock. If the federal standard becomes a $12 minimum wage that applies to servers, then the shift may be much more broader to a tipless environment.

"But as it stands now, the old model is working [for owners]. So why change?’