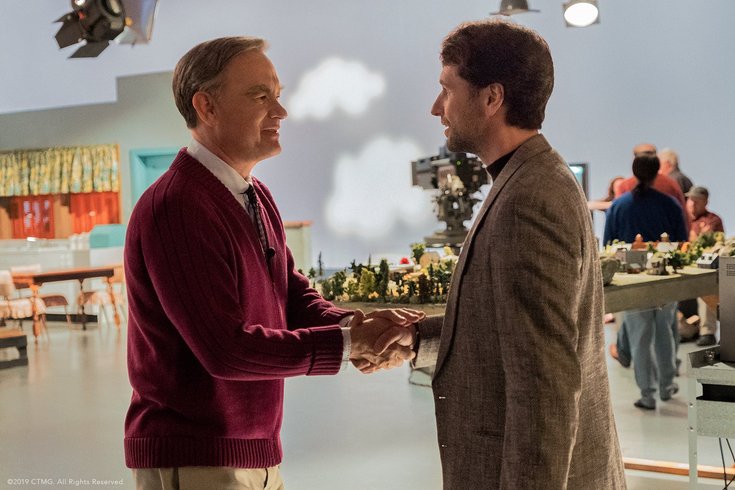 The trailer for the Mister Rogers film, "A Beautiful Day in the Neighborhood," The movie stars Tom Hanks as Fred Rogers and Matthew Rhys as Lloyd Vogel, a journalist who reluctantly accepts an assignment to write about Rogers.

Sony released the first trailer for the Mister Rogers flick, "A Beautiful Day in the Neighborhood," and if the two-minute preview doesn't make you cry … well, sorry to say, you may not be human.

The film follows Lloyd Vogel (Matthew Rhys), a journalist for Esquire who accepts an assignment to write about Fred Rogers (Tom Hanks). As the two men become close, Vogel's life begins to change.

The movie is loosely inspired by a 1998 Esquire article about Fred Rogers, "Can You Say ... Hero?" The film, however, is not a biopic. Instead, director Marielle Heller said "A Beautiful Day" focuses on how the reporter's life and perspective changed after interacting with the public television star.

Hanks portrays the Rogers, a Pittsburgh native, in all of the caring and loving ways that made him adored by the generations of children who watched "Mister Rogers' Neighborhood" growing up. As Hanks' Rogers says in the trailer, "I think the best thing we can do is to let people know that each one of them is precious."

The screenplay was written by Micah Fitzerman-Blue and Noah Harpster. Along with Hanks, "A Beautiful Day in the Neighborhood" stars Chris Cooper, Susan Kelechi Watson, Enrico Colantoni, Maryann Plunkett, and Tammy Blanchard.

"A Beautiful Day in the Neighborhood" will be released in theaters on Nov. 22.