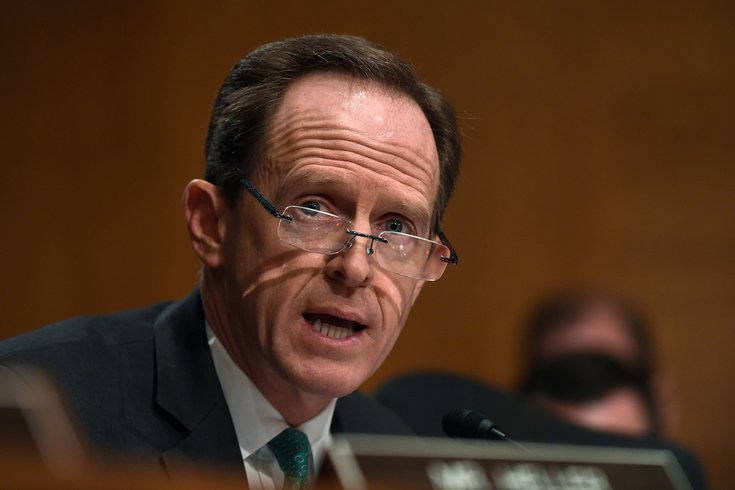 Following along with his Republican colleagues, Pennsylvania Senator Pat Toomey believes the next president -- not Barack Obama -- should nominate the replacement for Supreme Court Justice Antonin Scalia, who passed away over the weekend.

Toomey, much like presidential candidates and fellow senators Ted Cruz and Marco Rubio, argues that since the vacancy has popped up in the final year of Obama's presidency, it should be his successor that tags the next justice.

"President Obama insists that he will nominate someone for the Court," Toomey said. "He certainly has the authority to do so. But let's be clear - his nominee will be rejected by the Senate."

Toomey stressed that even if the next president was a Democrat, he would take a "nonpartisan approach" to the confirmation process. He also lamented the "politicking" taking place not long after Scalia's death.

Less than 72 hours since Justice Scalia's passing. There has already been too much politicking around the issue of his replacement.

The vacancy has stirred controversy as the Republicans hold a majority in the senate, and Majority Leader Mitch McConnell has stated that he believes the next president should choose the next nominee, despite that meaning a nearly year-long vacancy on the bench and previous statements from McConnell that contradict that position.

Toomey's Democratic challengers were quick to criticize his stance.

“William Penn said that ‘To delay Justice is Injustice,’" Former congressman and U.S. Navy Admiral Joe Sestak said in a statement. "It is time for Pat Toomey to fulfill his duty to the people of Pennsylvania and vow to quickly consider a new Supreme Court Justice rather than marching lockstep with partisan obstructionists in Washington, D.C.

Sestak hinted that a nominee with a legal education from outside an Ivy League institution might bring a fresh perspective to the bench.

He stressed that the next justice should be someone who, among other things, protects a woman's right to choose, something that Scalia opposed.

Protecting abortion rights was something Katie McGinty, former chief of staff for Governor Tom Wolf, stressed in her response to Toomey.

“Toomey’s partisan decision makes it clear he wants a Supreme Court that would take away a woman’s right to choose, continue an assault on women’s health care, attack and destroy health care reform and continue to allow dark money in politics," she said in a statement.

She also lashed out at Toomey's comments about politicizing the nomination process, saying that's exactly what he's doing.

.@SenToomey is the only one politicizing #SCOTUS vacancy by following McConnell's lead to not confirm a justice until next year

John Fetterman, mayor of Braddock and also a candidate for the Democratic nomination to challenge Toomey this year, issued a short statement regarding Toomey's decision.

"While not surprising, it is nevertheless disappointing that Sen. Toomey chose partisanship over patriotism."

He also took shots at Toomey on Twitter, saying the American people did have a say in the process when they reelected President Barack Obama in 2012.

What's wrong with the current president, @SenToomey? Now's the time for patriotism over partisanship. https://t.co/61fLnk8E7y

Toomey's campaign shot back at McGinty and Sestak for their comments, lambasting their records – and making no mention of Fetterman.

“Pat Toomey has demonstrated a clear record of bipartisanship when it comes to approving judges – Joe Sestak and Katie McGinty have never demonstrated any interest in working across the aisle about anything.”

While President Obama has said he will nominate a successor to Scalia "in due time," the White House has not yet officially commented on potential nominees.