A tornado watch is in effect until 6 p.m. 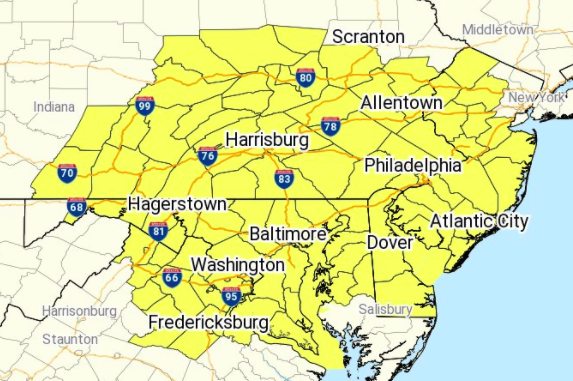 Severe storms passing through the Philadelphia region have left tens of thousands of people without power. The worst winds are forecast for Monday afternoon.

Thousands of people in the Philadelphia region are without power Monday, the result of dangerous winds that have damaged buildings and downed trees and power lines.

The worst of the winds – with gusts of up to 45 mph in the city – are expected in the afternoon as severe storms continue moving through the area, according to the National Weather Service.

A tornado watch is an effect in the Philadelphia region until 6 p.m. A high wind warning is in effect until 7 p.m. Hail is also possible.

Winds could persist in between storms and tidal flooding also is expected to occur on parts of the Chesapeake, Delaware, and Barnegat bays.

Nearly 50,000 residents are currently without power, including 36,000 Atlantic City Electric customers, 12,000 PECO customers and 1,100 PSE&G customers. Those numbers could increase as storms move across Southeastern Pennsylvania and South Jersey.

The first wave of showers began arriving at 6:30 a.m. In Delaware, wind gusts reached 70 mph. At the Jersey Shore, they hit 82 mph at Island Beach State Park and damaged the roof of Congress Hall in Cape May.

The National Weather Service advises drivers to be cautious and instructs people to remain downstairs and away from windows in their homes. People also are advised to secure all outdoor furniture.

A crane in Center City was spotted swaying by NBC10 due to the high winds across Philly.

#Breaking: We are already seeing reports of high winds and damage in our area. This video shows a crane swaying in the wind in Center City. Reminder that the entire area is under a tornado WATCH until 6 p.m. Be safe and track the storms now here: https://t.co/4vLPqgDN3I pic.twitter.com/RIjqxjZSPR

All Action Water Sports saw its roof in Somers Point get completely blown off by the high winds.

A Sunoco gas station in Egg Harbor Township, Atlantic County completely collapsed due to the storm on Monday.

The Wildwood boardwalk was ripped apart by the wind gusts on Monday.

Wow. I haven't seen something like this since Sandy. This storm is NO JOKE!!! 📸 credit: Phil Hoffman pic.twitter.com/YYjMRcU4uV

Here's the National Weather Service's forecast for Monday night and Tuesday morning.
Monday night: Mostly clear, with a low around 45. West wind 5 to 15 mph, with gusts as high as 30 mph.

Tuesday morning: Mostly sunny, with a high near 58. Northwest wind 5 to 10 mph.