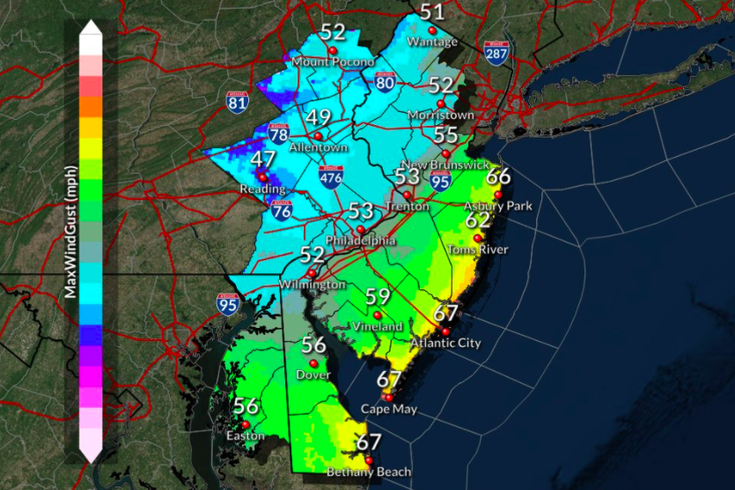 A high wind warning has been issued by the National Weather Service (NWS) for Southeast Pennsylvania, New Jersey, and Delaware on Monday.

UPDATE: The entire Philadelphia region is under a tornado watch Monday. The National Weather Service issued the watch and it remains in effect until 6:00 p.m. Parts of Pennsylvania, New Jersey, Delaware, and several other states could see tornadoes, hail, and gusts of up to 70 mph during Monday afternoon.

A high wind warning has been issued by the National Weather Service for the Greater Philadelphia region on Monday that could cause widespread power outages due to down trees and power lines.

The warning, which goes into effect at 6:00 a.m. on Monday morning and will last until 7:00 p.m. on Monday night, was issued for Southeast Pennsylvania, New Jersey, and Delaware.

Along with causing widespread power outages across the region, the damaging winds could make travel difficult on Monday. Therefore, those on the road should take caution while driving. Additionally, the National Weather Service is advising people to avoid being outside in tree-covered areas, remaining downstairs while at home, and to stay away from windows.

Rain and high winds are expected to arrive in the region after midnight on Sunday, with a south wind of approximately 15 miles per hour (mph) and gusts expected to be as high as 30 mph. There is a 100% chance of precipitation, and roughly between a quarter and half of an inch of precipitation is expected to accumulate overnight.

Moderate to heavy rainfall will likely continue into Monday morning and lead to localized flooding, thunderstorms with damaging wind gusts, large hail, and an isolated tornado, according to the National Weather Service.

Multiple threats can be expected over the next 24 hours. Very strong winds, severe weather, heavy rainfall, even coastal flooding on the Chesapeake. Damaging winds, with large hail and even an isolated tornado are possible Monday with the severe storms. #njwx #dewx #mdwx #pawx pic.twitter.com/6UYPOu4aVw

Here’s a complete forecast from the National Weather Service for Monday.

MONDAY: Showers and potentially a thunderstorm are expected before 3:00 p.m. A chance of showers and thunderstorms could arrive after 3:00 p.m., with some storms producing heavy rainfall. It is also expected to be windy, with a south wind of 25-35 mph and gusts as high as 60 mph. With a 100% chance of precipitation, rainfall totals could come between three quarters and one inch. High of 73 degrees.

MONDAY NIGHT: A chance of showers and thunderstorms before 7:00 p.m., then becoming partly cloudy. A west wind of 10-15 mph, as well as gusts of as high as 25 mph, is expected. The chance of precipitation drops to 30%, with less than a tenth of an inch projected. But thunderstorms could lead to higher precipitation totals. Low of 45 degrees.

TUESDAY: Mostly sunny with a high of 58 degrees. A northwest wind of 5-10 mph is expected