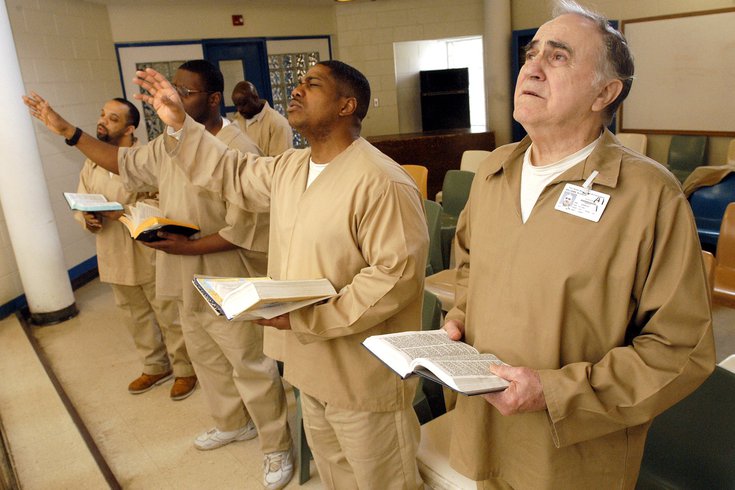 Some nonviolent inmates housed in New Jersey's state prison system will be temporarily released to home confinement, a move aimed at slowing the spread of the coronavirus in correctional facilities. Above, inmates at Riverfront State Prison in Camden, in March 2004.

New Jersey will temporarily release certain nonviolent inmates housed in state prisons in an attempt to slow the spread of COVID-19 among correctional facilities.

An executive order signed Friday by Gov. Phil Murphy allows some inmates with high risk for coronavirus infections to be released to emergency home confinement. Others will be granted parole. The state previously released some inmates from county jails.

Nonviolent inmates over age 60 and those with high-risk medical conditions will be considered for release. So will inmates whose sentences max out in the next three months and those who have been considered for parole within the last year.

No inmates serving sentences for violent crimes, like murder or sexual assault, will be released, Murphy said.

"'I'm signing this executive order to preserve balance between public health and public safety," Murphy said. "By allowing some of our most vulnerable persons to temporarily leave, it will protect their health, and those working in prisons."

Inmates will be considered for release on a case-by-case basis, Murphy said. They each will be provided a personal release plan ensuring they have access to necessary services. Officials said they did not yet know how many inmates would be released.

Marcus O. Hicks, commissioner of the New Jersey Department of Corrections, echoed Murphy's message, saying caution is needed to protect "those in custody and civilian staff working on the front lines every day."

As of Friday, 129 staffers and 20 inmates had been infected by the coronavirus. One inmate had died of COVID-19. Another 1,000 staffers and 400 inmates were on quarantine, but they are not all symptomatic, Hicks said.

"When you are running a correctional facility, there are significant challenges to institute social distancing," Hicks said. "We have taken significant strides to combat this pandemic, starting with cleaning and sanitizing."

New Jersey officials already have limited inmate gathering, dining and visitations. Also, all staffers are required to wear masks and some copays for inmates receiving COVID-19 tests have been eliminated.

There are 54,588 coronavirus cases across New Jersey, including 1,932 deaths.