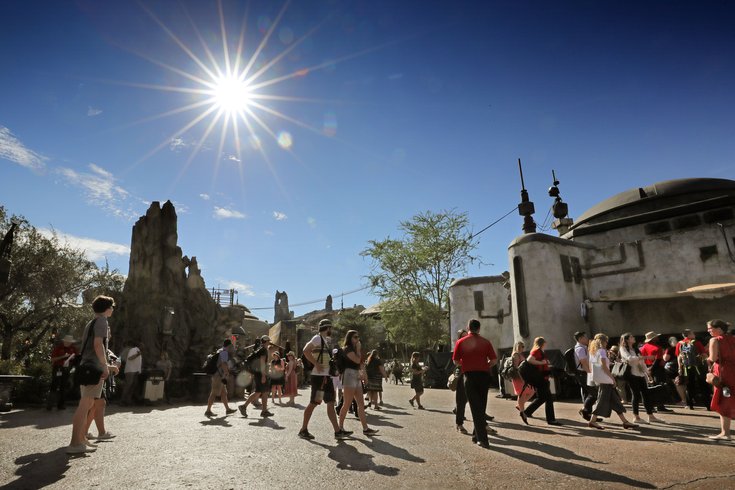 Invited guests check out Black Spire Outpost during a sneak peek of the Star Wars: Galaxy's Edge attraction at Disney's Hollywood Studios, which opens on Thursday. Just days before the attraction opens, TSA is banning a popular souvenir soda container from flights because it looks like an explosive.

Disney's new theme park additions in California and Florida are causing some problems for travelers and TSA.

Star Wars: Galaxy's Edge in Disneyland in California, and (as of Thursday) at Disney World in Orlando are selling every kind of Batuu-themed souvenir you can think of: Lightsabers, blasters, droid headbands, kitchenware. Even soda bottles.

The specially-designed Coca-Cola bottles in particular were modeled after replica explosives inspired by the Star Wars franchise. And apparently, they're extremely popular among fans. Here's what they look like.

TSA released a statement saying it would ban the bottles from both carry-on and checked bags because they resemble explosives.

Thanks for asking! Replica and inert explosives aren't allowed in either carry-on or checked bags.

This may come as a disappointment to diehard fans of Disney and Star Wars, as the highly-anticipated opening of the attraction in Orlando nears.

FFS, TSA. That’s asinine. Quit being so lazy, and stop with the security theater.

Asked if the soda containers would be permissible if the lids — which most resemble an actual explosive — were removed, the TSA said if discovered in a bag and agents believe it's real, "the item will be treated as such until advised by law enforcement."

So many people are going to miss out on taking their souvenirs home due to this misleading answer. There are no markings on the bottle that resemble an explosive. Thousands of these coke bottles have already flown with no issues.

Then why have so many people already flown with them in their luggage without any issue?These have been around for awhile. They're no different from the round soda bottles sold at Christmas.

A replica of WHAT? A movie prop!

A request for comment from Disney was not immediately answered. We'll update when we hear back.