Turnpike bridge shut down for at least eight more weeks

Motorists who have been using detours around the shuttered Delaware River Turnpike Bridge will have to stick it out at least through April.

Two weeks ago today, the 1.25-mile bridge was closed after NJTA crews discovered a fracture in a steel truss. Officials have said it will remain closed until the structural component can be repaired.

But an April re-opening is a best-case scenario, according a task force of about two dozen public and private engineering design, construction and transportation entities working on the problem. The bride would only re-open that early if a more complex partial reconstruction or possibly even replacement of the bridge is unnecessary.

“We recognize that those who travel through, live, or work in this region have been considerably inconvenienced by this closure, and we are as excited as anyone to see it reopen,” said PA Turnpike Chairman Sean Logan, in a statement. “But please remember, this is an emergency situation; we’re working around the clock to resolve it. It would be reckless to put a single vehicle back onto this structure before we trust its stability.”

The engineers have been working on several possible repair scenarios; both the PTC and NJTA are hoping the simplest construction method will be effective.

"Right now, that best-case scenario entails repairing the I-beam by constructing a permanent splice to reconnect the fractured section," said PTC Chief Engineer Brad Heigel, in the statement. "But before that can occur, crews must first realign the bisected segment by deploying eight temporary towers and hydraulic jacks to return the span to its original position."

Due to the truss fracture, a section of the bridge between the two supporting piers dropped by about two inches. Adjoining structural components, not designed to carry a heavier load, nonetheless absorbed the load carried by the cracked I-beam, officials said. That meant the bridge was structurally unsafe. 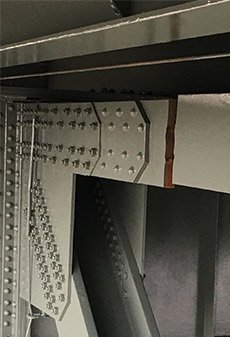 The plan is to construct eight, 80-foot-towers from the ground to support the entire weight of the bridge. Crews have already drilled piles to provide a stable foundation for the towers. When the towers are in place, a new "splice" will be installed and tested, officials said.

"As the jacking operation occurs and load is transferred within the bridge, instrumentation will monitor the actual loads, stresses and displacements which will be compared to estimated outcomes from computer models,” Heigel explained. “This monitoring — which involves affixing about 50 sensors to the structure — is the only way we can confirm that the splice is successful before we reopen the bridge.”

Data from those sensors during load testing will enable engineers to determine whether a more comprehensive repair is needed. All bets are off on a reopening if the initial repair is not sufficient.

“If more extensive repairs would be required, it is not possible to offer even a rough estimate on the scope or duration of further construction because we simply do not have adequate information to make that projection,” Heigel said.