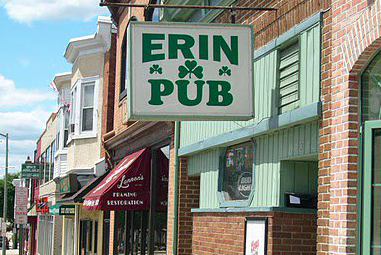 A pair of dive bars popular among students at Villanova University both announced plans Tuesday to close during the summer, ending lengthy runs at their respective locations.

In a statement on Facebook, the owners of Erin Pub said this coming weekend will mark the end of the road after more than 40 years on Lancaster Avenue in Bryn Mawr.

"Thank you to everyone who made this pub a favorite hangout through the years," the owners said. "C'mon down and relive your favorite times here, get a picture, get a memorial mug, get a drink one last time before it's gone. We will miss you all."

Patrons flooded the bar's post with sad and supportive comments about their experiences over the years.

"How is the Erin Pub not a protected historic landmark??!!" asked Bob Rabner.

"I'll cherish my mug forever or until it breaks," added Ralph B. Gillis.

Nearby Maloney's Pub, also on Lancaster Avenue, said it will be shutting its doors at some point in July, prompting a similar reaction from loyal patrons.

"It is with two very heavy hearts that we are announcing that Maloney’s Pub will be closing its door this summer," owners Mike and Sean Maloney wrote in a Facebook post earlier this month. "This is not something we want to do, but certain circumstances and certain groups have created a situation that has made remaining open increasingly difficult."

Maloney's opened in 2002 and has been a favorite place for fans of the Villanova men's basketball team to watch the Wildcats compete in the NCAA tournament.

If there's any silver lining here, at least both bars lived to celebrate the Wildcats' national title in 2016.