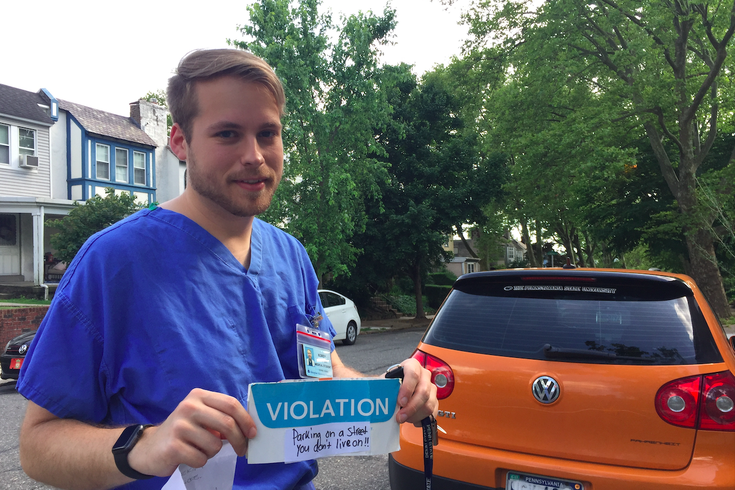 Korey, whose car has been vandalized in East Falls twice in the past month, holds a petty note that someone left on his vehicle. Someone doesn't like how he parks his orange car around the corner from his apartment.

‘Twas November of 2016 when Korey – the owner and operator of a metallic-orange 2007 Volkswagen Fahrenheit GTI – approached his car in East Falls and saw a “somewhat passive aggressive note” handwritten on a piece of lined paper that someone had slid under his windshield wiper.

“MOVE YOUR CAR!” it read. “No one wants to see your bright orange car every time they look out their window. Park on another street. You have no right to park here.”

Those who would see that vehicle live on the 3300 block of Ainslie Street, a residential strip that dead ends into a busy stretch of Henry Avenue.

The 25-year-old medical student, who requested his last name not be used in this story, lives around the corner in a Henry Avenue apartment with no off-street parking.

Having moved to the neighborhood three months earlier, he got a Zone 8 parking permit which meant he had every right to park there. So park there, he did.

The driving force was his fear that parking on Henry could leave his car damaged. (After all, a Penske truck would later slam into his neighbor's home.) 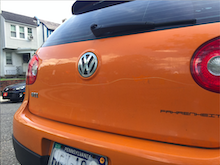 Damage from a key and spray paint.

The initial burst of attention drawn to that note stirred up a little pushback.

“I was confronted by a woman with a small dog who lives on Ainslie about where I park my car. She said, 'In this neighborhood, people park in front of their own homes,'" he recalled. "It seemed she didn't like the color of my car. She seemed to already know where I lived, which I thought was strange.”

Things would quiet down for the next couple years, but flash-forward to the spring of 2019, and the situation would intensify anew.

In early May, an anonymous vandal spray painted white over the license plate. Then, on Sunday, the car got keyed.

On Thursday afternoon, Korey shared the name of the person he and others on the block think is responsible for all those petty acts, which he's since reported to 39th District police, but there's no hard proof or evidence.

Should that perpetrator get caught in the act – whether by an eyewitness or security camera – he intends to press charges. (He’s reached out to neighbors on a “see something/say something” mission. That call to observational arms has yet to bear investigative fruit.)

On Thursday, he stood behind his ride holding a fake "violation" envelope on which someone had written "Parking on a street you don't live on."

It was just another bit of evidence that someone who lives nearby harbors much hatred for his ride.

“I pay to park on these streets just like everyone else that lives around here,” he said. 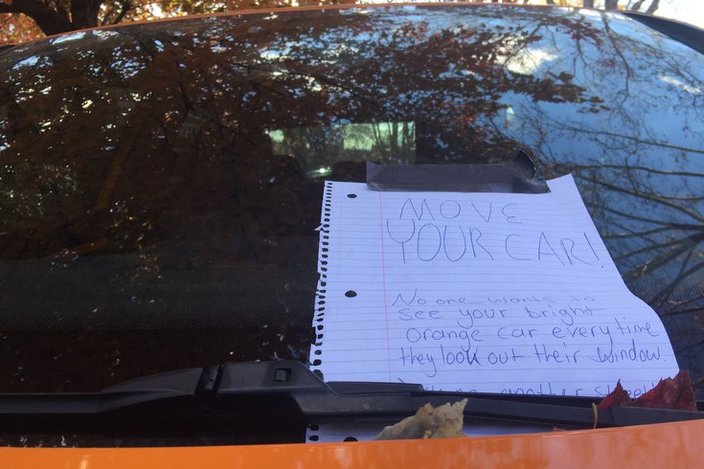 A look at the passive-aggressive note taped to the windshield of a vehicle parked on the 3300 block of Ainslie Street in East Falls in November 2016.

Already, he’s spoken to a near-neighbor who received a “threatening note on their windshield and what looked like urine on the door handle” in April, all because that person parked a car with out-of-state plates on a side street instead of along Henry Avenue, too.

The recent instances of vandalism are "too perfect to be a random act," so Korey filed dual reports.

Heather Sparks has lived on Ainslie since 2001, and has noticed that things seem to be escalating of late. She, too, pinpointed the same potential suspect that Korey mentioned, saying the problem derives from neighbors intent on parking in front of their home.

"If you want to be able to park in front of your house, go buy a house in the suburbs," she said Thursday night. "They seem to be targeting that particular car. What I told Korey is 'Give me your number. I will look out for your car. I think your car is great.' It's just juvenile."

“If you don't like the color of my car, I respectfully don't care. You can take it up with the police.” -- Korey

Due to the demands of his med-school schedule, Korey hasn't been able to get the damages fixed yet, but has a copy of a police report in his glove compartment in case he gets pulled over because of the obscured plates.

For his part, Korey is not letting one bad neighbor overshadow all the good things he likes about the neighborhood, but he's clearly frustrated by the ongoing nonsense.

"Most people here are super nice but now, because of what took someone five seconds to do, I have to spend a bunch of time mired in bureaucratic red tape to fix things," he said. "I had a Parking Authority application that I was going to leave on her front steps since she seems to be really good at their job."

Korey was asked what the takeaway is from his tale of petty grievances leveled against his car for no good reason.

"There are bigger problems in the world than worrying about where someone parks their car, or what color someone else's car is," he said. "If you don't like the color of my car, I respectfully don't care. You can take it up with the police."