Who is throwing bottles filled with pee at couple's Philly home?

The East Falls residents don't want to get anyone in trouble, but hope to understand why 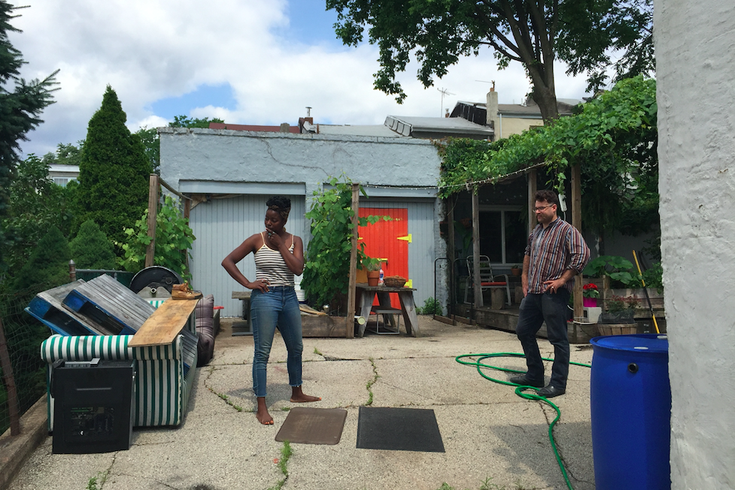 Stephanie Cole and Dan Ostrov, a married couple from Philadelphia's East Falls neighborhood, say some 30-or-so bottles filled with urine have been thrown onto their roof and into their yards since they arrived in 2015. Now a surveillance camera will try to catch the offenders in the act.

When Dan Ostrov and Stephanie Cole moved into their East Falls rowhome back in 2015, they quickly noticed leaks in the roof of a garage they were renovating into a sculpture studio.

Ostrov started plugging the holes, but when the issue continued, they climbed up onto the roof to take a look.

“I noticed several bottles filled with yellow liquid,” Cole said Monday in their Stanton Avenue backyard. “I didn’t know of many other yellow liquids that come in water bottles, so we figured it out quickly.”

What they figured out is something that’s continued to this day, escalating over the course of the past two weeks.

Someone – probably from a backyard of a home on Calumet Street which sits behind their property – has been peeing in water bottles and throwing them onto the roofs of their studio and home.

Just this weekend, it took a different twist.

While over the course of four years the bottles had remained intact, a pair of them slammed onto their roof, rolled off and exploded on the ground.

What that meant was they could no longer just throw the urine-filled missiles into the recycling bin and call it a day, Cole had to hose the cement outback off with a bleach-and-water blend to get the stench to dissipate.

They estimate that roughly 30 bottles have found their way onto their property over the years, but that 10 have arrived in distracting fashion over the course of the past two weeks. It's not the kind of thing that should accompany warmer weather.

That tally includes several after Cole posted the unusual tale on a neighborhood rants-and-raves Facebook page, writing that she’s “trying to figure out which one of my insane backyard neighbors keeps chucking full bottles of hot piss on my roof.”

“I don’t know what we’d do if we figure out who it is. Go knock their teeth out?” – Dan Ostrov, East Falls resident

Certainly, the target of such a nuisance would like to get to the bottom of the situation, but there are few answers at this point.

As Cole and Ostrov shared their story on Monday, their neighbor Victor was shocked to hear what had been happening. He’s never found a bottle in his yard, but the neighbors on the other side of the couple's home have found one. (They reckon it was just an issue with poor aim rather than a targeted toss.)

“I’ve never seen it happen, but I have heard it,” said Ostrov who, like his wife, is seemingly finding the humor in an affront to good-neighborly relations. “You hear a loud ‘thud,’ and then think, ‘Oh great, it’s happening again. What the f***?’”

So she went out and bought a security camera over the weekend in a bid for evidence of an act that always tends to happen in broad, middle-of-the-afternoon daylight.

Looking out from a second-floor bathroom window, the couple pointed out a pair of filled bottles that arrived in recent days. (They were left there for a reporter to see.) 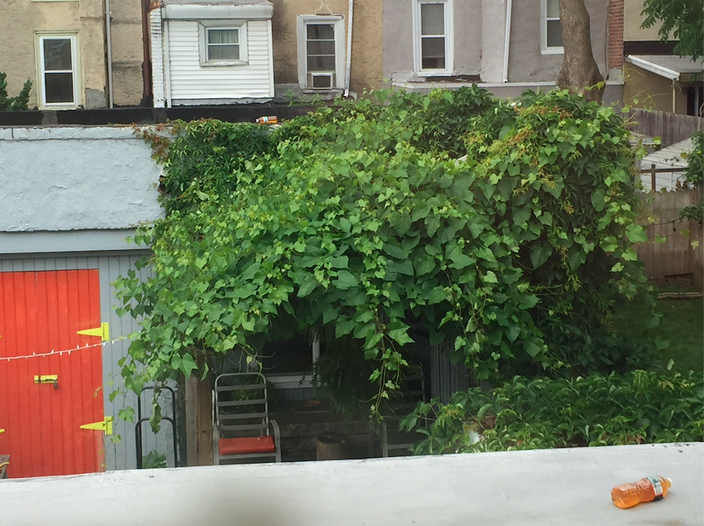 Over the past two weeks, someone has thrown about 10 urine-filled bottles at an East Falls home. The one seen in this photo arrived on Saturday, June 1, 2019.

The couple said they don’t have any disagreements with the neighbors who live behind them. In fact, they don’t even know the people who live there.

“All of this has made me want to be a more engaged neighbor,” Cole said introspectively.

Four houses appear to be within arm-shot of where the bottles have landed. A man who lives on Calumet said that he didn’t think any of those residents – a pair of young couples, an older couple and one rental property – fit the bill as being responsible for such behavior.

“It’s a really weird thing to have to try and figure out,” Cole said. “I bought the camera yesterday because we’ve just had enough. One of the bottles just exploded right in front of our back door, leaving foaming hot piss everywhere!”

The couple hasn’t filed a police report in regard to the ongoing issues. They said it really doesn’t rise to the level of a crime that deserves attention from 39th District officers.

But the public affairs office of the Philadelphia Police Department said public urination carries a fine of $300, and “throwing urine in a bottle onto property may or may not be vandalism.” To that end, police urged the couple to file an incident report “just in case police do catch this idiot.”

'IT'S SUCH A WEIRD THING'

Cole said a level of relief accompanied going public with this story of escalating nuisance.

“Why should I be embarrassed about it? I didn’t do this. It felt good to post about it,” she said, noting that she’s not as interested in someone getting in trouble for the bottle throwing as she is in understanding why it's being done. "Maybe it's not the people right behind us, but someone with a T-shirt cannon from further away?"

Ostrov has a theory about the recent leaks.

“When the bottles aren’t busting open, it’s obnoxious, but not the worst thing in the world,” Ostrov said. “Since they’re breaking open now, I’m starting to think they’re using cheaper plastic to make the bottles.”

The projectiles are always small bottled water containers – sometimes of the Deer Park, Shop Rite brand or Niagara varieties. Ostrov wanted to head over to Calumet to check recycling bins for matching bottles, but it’d been collected by the time lunch rolled around on Monday. (Perhaps next week.)

“I don’t know what we’d do if we figure out who it is,” continued Ostrov, hearkening back to the “piss jugs” on “Trailer Park Boys,” a sitcom out of Canada. “What am I going to do? Go knock their teeth out?”

“Challenge them to a duel?” his wife added with a laugh. “Choose your weapon!”

For now, they’ll settle for just capturing potential video of a flying, pee-filled water bottle. Sure, they likely wouldn’t be able to see who threw it from the camera’s angle, but they'd have a better sense of the exact direction from which it came.

That would ideally lead into a friendly discussion including a request that the bottle-throwing come to an end.

“I’m not mad about it,” Cole said. “I’m more intrigued with the psychology behind it. It’s such a weird thing.”

That it most certainly is.