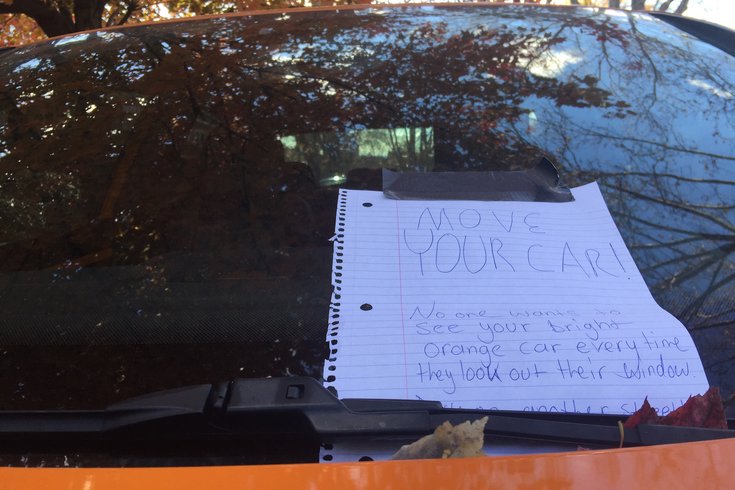 A neighborhood app was abuzz on Monday with discussions about a passive-aggressive note taped to the windshield of a vehicle parked on the 3300 block of Ainslie Street in East Falls.

These are angry times we are living in.

Along one block in East Falls, the acrimony manifested itself as a note taped to a car’s windshield that sets a new bar for passive-aggressive neighborly angst.

Just a few yards in from Henry Avenue on the 3300 block of Ainslie Street on Monday afternoon sat a metallic orange Volkswagen Fahrenheit GTI.

There’s a Penn State University sticker across the rear windshield, but no parking permit that would preclude it from being ticketed for staying in place more than one hour at a time after 5 p.m. on weekdays. It's been there over the course of the past couple weeks.

On the front windshield, tucked under the wiper blade and taped to just about driver’s eye level is a piece of ruled paper.

“MOVE YOUR CAR!” it reads. “No one wants to see your bright orange car every time they look out their window. Park on another street. You have no right to park here.”

This is a mean note, and one that locals spent much of Monday debating on the neighborhood’s NextDoor app page. 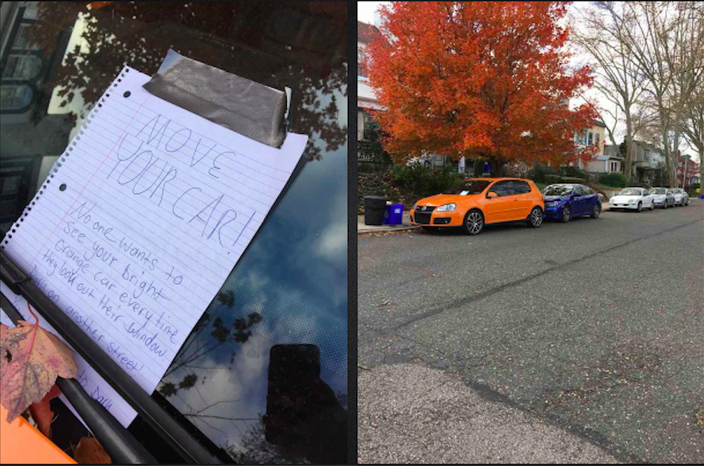 An angry note was taped to the windshield of this orange car that a neighbor does not like seeing when he or she looks out of his or her window in East Falls.

Around 9 a.m., Fallser Heather Sparks started the post under the title “Parking War?”

It offers some back story about how a similar situation led to a car windshield getting busted out by anonymous forces.

“The last time this happened, about a year ago, the car that had the note left on it then later had its rear window smashed in,” the post read. “This isn't my car, but I have absolutely no problem with it being parked, legally, on the street. I have no idea who has left this note, but I hope they can find a way to deal with people parking on their street without resorting to violence.”

These are noble intentions to avoid further aggression. After all, an Ainslie Street resident told me Monday afternoon that that case involved a college student who found a note – essentially, “you don’t pay taxes here, don’t park here” – on his Dodge Charger and subsequently a busted-out window.

The comments thread that resulted – about two dozen deep within a few hours – touches on a few emotions. They include:

Sarcasm: “I think it complements the foliage quite nicely.”

Realism: “Nobody owns the spot out front their house. This is the city.”

Fear: “We stopped parking on Ainslie because we got passive-aggressive notes on our car as well. And we didn't even park there often!”

Name-clearing: “I wish the guy who is so angered by people parking on a public street had the balls to sign his notes because I don't want my family being unfairly blamed as lunatics since this is pretty close to our house. At least the crazy dog poop guy on Osmond yells at you to your face.”

Revisionist-history: "Just go remove the note before the owner sees it then."

And, the need for measured response: “Maybe people who live on this block who doesn't support this message could leave notes saying you're welcome to park here or words of support. That sends a welcoming message to the car owner and let's the ass know that type of aggression isn't welcomed in our neighborhood.”

Anyway, I left my business card tucked into the driver-side window to see if the car owner had "anything to say about your anonymous hater" who very well may have been the old head who eyed me up as I approached the vehicle from across the street.

And if it was (as neighbors have a suspect matching that description who has angrily confronted other locals in the past, albeit directly), might I say, "Grow the hell up, sir. You don't own the street and orange is a fine color."

I’ll update this post should they take me up on that offer.

But in the meantime, the residents of the 3300 block of Ainslie Street are left to wonder who among them doesn’t have the courage to put their name to the sort of cowardly anger that thrives among online commenters unwilling to put a name to their words.

The 39th Police District had better keep one of those petty vandalism report forms handy, because if this note-placer was angry enough to smash one window last time, who knows how many will get shattered this go-around.