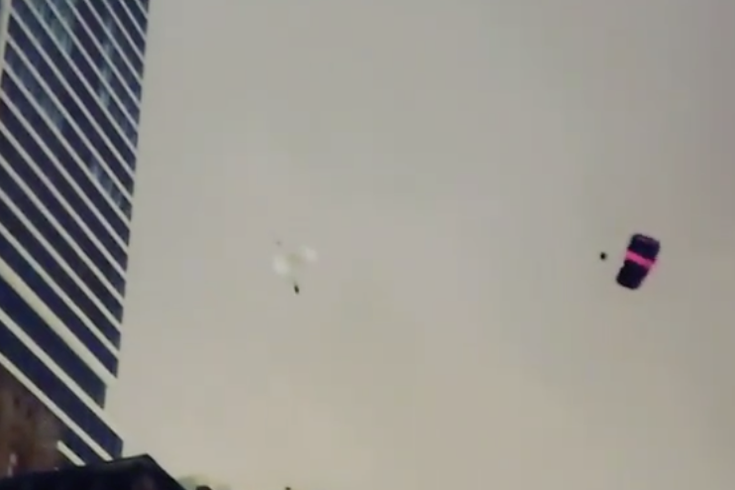 Philadelphia resident Candace Skinner captured a video of BASE jumpers parachuting down after leaping from a luxury condo building in Rittenhouse.

It's not every day that you see people in parachutes floating down from the Philadelphia skyline.

That's because BASE jumping (an acronym for Building, Antenna, Span and Earth) is an inherently risky activity. It involves people leaping from death-defying heights, obviously, but it also frequently requires accessing locations secretly – and illegally – in order to make the jumps possible.

Candace Skinner posted a pair of videos to Instagram on Monday morning that show people in parachutes drifting down from a skyscraper in Rittenhouse. She would only say the videos were recorded recently, but did not disclose the exact time. Skinner, who works as a restaurant manager, confirmed to PhillyVoice that she recorded both videos from her private roof deck in Center City, not far from Rittenhouse Square.

"I was just kind of looking at my phone and I heard something that sounded like huge wings flapping," Skinner said. "I looked up and there was a parachute."

Skinner saw a total of three people jump from the building, which appears to be The Laurel, a 48-floor luxury condo building at 1911 Walnut St., just beyond the northwest edge of Rittenhouse Square. Developed by New York-based Southern Land Company, the building topped off late last month and has a $25 million penthouse on the 48th floor.

"It appears multiple individuals BASE jumped from The Laurel last evening, trespassing onto private property and putting their safety and the safety of others at risk," a spokesperson for Southern Land Company said Tuesday. "This is incredibly troublesome. We absolutely do not condone this type of behavior."

The developer said a police report for the incident will be filed.

"Safety and security are top priorities for us, and we will take appropriate steps to increase security at The Laurel in an effort to prevent this from happening again," the spokesperson said.

City officials did not respond to an inquiry to see whether they are aware of the BASE jumpers.

Philadelphia police, too, said they hadn't received any reports of parachutists jumping from buildings in the middle of Center City, as of Tuesday afternoon. Whether or not the jumps had been permitted, a police spokesperson explained that it would be unusual for incidents like this not to pop up on the department's radios.

But what is a BASE jumper, if not a mysterious badass who evades detection?

After Skinner posted her videos on Instagram, she said she was contacted by one of the three BASE jumpers.

"He was just like, 'I can't believe you got that footage,'" Skinner said, adding that he was happy to see it turn up and didn't mind her speaking with the media about the feat. "He thanked me for getting the video and said he thinks his group is the first to ever jump from that building. I was like, well, it's a brand new building, so of course you are."

BASE jumpers sometimes wear cameras, but it's not as often that they come across other people's footage of them, given the extreme precautions they take to execute their plans and maintain anonymity. In the middle of a huge city, it's a bit surprising that more people didn't see the parachutes falling and take videos.

Skinner said she had not spoken to any other witnesses and does not want to see the BASE jumpers get in trouble, although the one who contacted her acknowledged that such risks come with the territory.

The legalities of BASE jumping, in general, can get murky and may vary depending on the structures and land masses in question. The preparations involved in making these kinds of jumps can result in chargeable offenses, including trespassing, most commonly, and sometimes reckless endangerment or vandalism.

Some natural and built locations that aren't specifically designated for BASE jumping may allow jumpers to apply for permits, but these sites often end up scrapping their programs if jumpers fail to follow rules over time. At national parks, fines can reach as much as $2,000, plus the cost of any rescue services that may be required.

Skinner, a Florida native, is pretty accustomed to strange and interesting human behavior. But having lived in Philadelphia for eight years now, she said she hadn't seen anything quite this crazy before.

"It's Philly, so I've seen some s***," Skinner said. "But never this. I actually had to Google the word for jumping off buildings. I had completely forgotten what BASE jumping was."

As for the trio of jumpers who got the thrill they were seeking, give them credit for their craft.