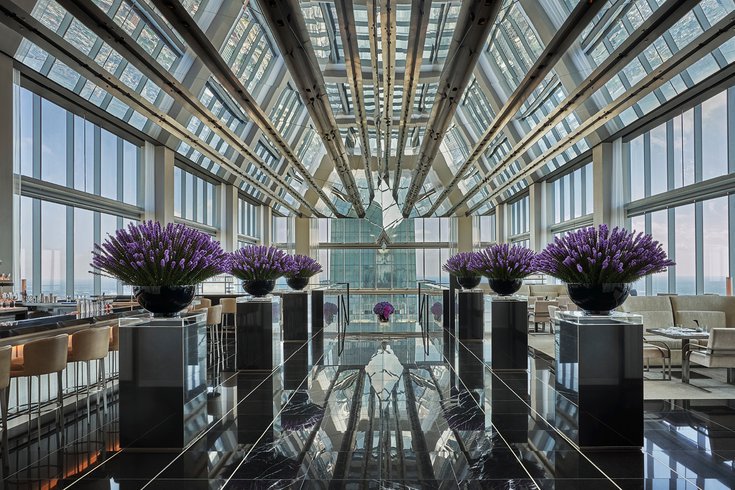 Condé Nast Traveler ranked the Four Seasons Philadelphia at No. 22 on its list of the 50 best hotels in the world that was published this week. The list was released as part of the publication's 2021 Readers' Choice Awards.

The Four Seasons Philadelphia's "passionate, genuine" service, world-class amenities and panoramic views of the city has made it one of the best hotels in the world, according to Condé Nast Traveler.

The magazine ranked the Four Seasons Philadelphia at No. 22 on its list of the 50 best hotels in the world that was published this week. The list was released as part of the publication's 2021 Readers' Choice Awards.

The Four Seasons Hotel Philadelphia was also rated No. 1 for the Mid-Atlantic region and No. 6 in the United States by Condé Nast.

The publication's editors wrote that guests "can expect seamless service" when staying at the luxury Center City hotel. The magazine also praised the property's extensive skyline views and many of those who contributed to the hotel's amenities, including award-winning chefs Jean-Georges Vongerichten and Greg Vernick behind the elegant Jean-Georges restaurant and bar.

The magazine's editors concluded by writing that the Four Seasons could be part of "the beginning of a transformation of Philadelphia's hotel scene."

"We are honored to share in your wanderlust and look forward to welcoming you to an unforgettable getaway above the clouds soon," the hotel wrote on its Facebook page.

To all our guests - past, present, and future - thank you ❤️ Your continued support helped our team earn the recognition...

The Four Seasons Hotel Philadelphia opened in August 2019 on the top dozen floors of the 60-story Comcast Technology Center in Center City, which is now the tallest building in Philadelphia. The 219-room hotel features a 30,000-gallon infinity pool and the highest-situated spa in North America with seven treatment rooms and walls packed with almost 700 pounds of healing crystals.

The property was named one of the 14 best hotels in Philadelphia last year by Condé Nast Traveler. The Four Seasons was also rated one of the world's 100 top luxury hotels in 2020 by Forbes, becoming the first Philly hotel to receive the publication's prestigious five-star designation.

La Mamounia in Marrakech, Morocco was rated the top hotel in the world this year by Condé Nast Traveler. The Gwen in Chicago was named the best hotel in the United States and came in at No. 8 overall.

Over 800,000 voters weighed in with their favorite hotels when the publication's 34th annual survey was conducted this past April and May. Hotels were rated based upon their rooms, service, food, design, location, value, activities and facilities.