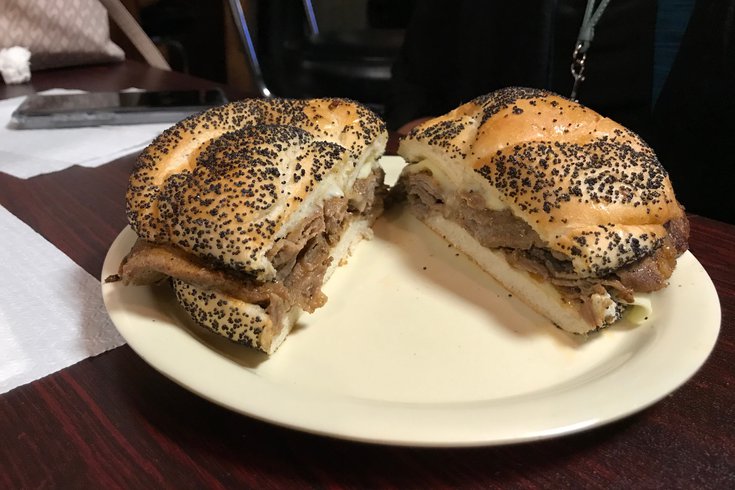 The cheesesteaks at Donkey's Place are served on poppyseed kaiser rolls, a different take on the iconic Philadelphia staple. After more than 75 years in Camden, Donkey's Place is working on an expansion that will add locations to Mount Holly and Philly, in addition to the original restaurant and a second spot in Medford, New Jersey.

Legendary Camden cheesesteak shop Donkey's Place is ready to open its doors next week at a new location in Mount Holly.

The restaurant and bar, a staple on Haddon Avenue for more than 75 years, announced this summer that it planned to open new locations in Mount Holly and eventually in Philadelphia.

On Monday, Donkey's Place will begin serving up its signature take on the cheesesteak at 37 Washington Ave. in Mount Holly.

We are happy to announce our Grand Opening for October 11th! Can’t wait to see all of you!

Donkey's Place is known for its unique South Jersey interpretation of the Philadelphia staple, which it serves on a round, poppyseed-roll with American cheese, hot peppers and browned onions.

The Camden restaurant received national attention in 2015 when the late Anthony Bourdain paid a visit for an episode of "Parts Unknown," calling the Donkey's Place cheesesteak better than anything he'd tried in Philadelphia.

The brand is named after the bar's late founder, Leon Lucas, an Olympic heavyweight boxer whose punch was likened to a kick from a mule. Lucas died in 2015 after a long battle with cancer, but his family has kept Donkey's Place alive in Camden and at an additional location in Medford.

In addition to the new Mount Holly location, Donkey's Place has tentative plans to seek another location in Philadelphia in the next year or two, possibly in Northern Liberties.