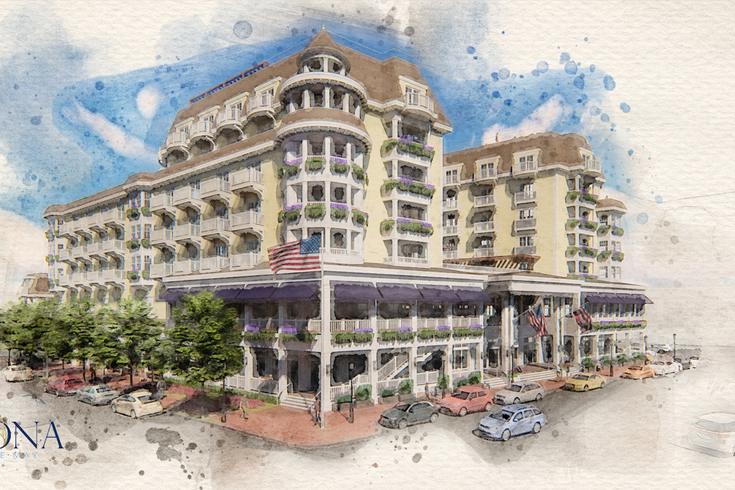 Icona Resorts will propose a 168-room hotel along Beach Avenue in Cape May at the former site of the Beach Theatre. Developer Eustace Mita has developed Icona branded hotels in Avalon, Diamond Beach and Cape May.

The former Beach Theatre in Cape May, once a popular place to catch a movie at the Jersey Shore, could become the site of an ambitious hotel project that seeks to revive the atmosphere of a bygone era.

Cape May City Council last week heard plans from developer Eustace Mita, a Philadelphia native and founder of the Icona Resorts brand, which already has luxury projects in Avalon, Diamond Beach and a smaller location in Cape May.

Mita has partnered with Philadelphia-based DAS Architects to develop a plan for a seven-story, 168-room hotel that would cover the area from Stockton Place to Gurney Street. The site not only includes the property of the Beach Theatre, which was built in 1950 and demolished in 2011, but also several storefronts along Beach Avenue and Gurney Street.

DAS shared a pair of conceptual renderings of the proposed hotel, which would sit across the street from the city's Convention Hall that was completed in 2012.

Mita told City Council that the project will cost in the range of $100 million and he plans to file a formal application in the next 60 days, according to the Press of Atlantic City.

The project would include a rooftop pool and 268 parking spaces contained on four interior levels, which Mita said will keep the hotel's activity from clogging the streets. Other features would include ground-floor retail, restaurants, cafés and a ballroom. Mita said a four-story town home also will be part of the plan. 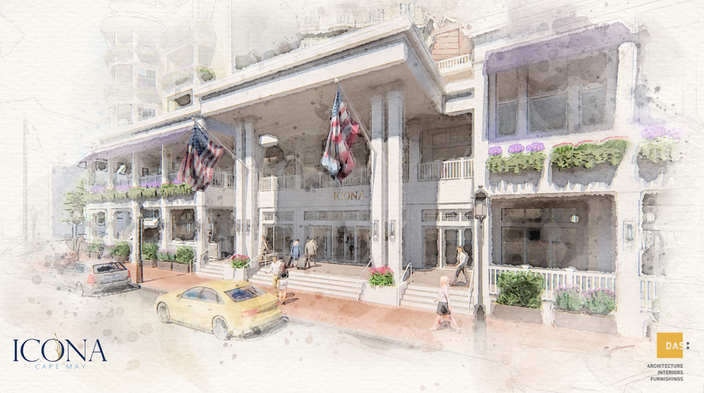 A rendering of the proposed Icona Resorts hotel in Cape May.

Icona Resorts also entered a partnership earlier this year with Gillian's Wonderland Pier in Ocean City to reinvent the experience at the historic boardwalk destination.

With the proposed project in Cape May, the brand will seek to build a new destination from the ground up — one that calls back to the era of grand hotels at the Jersey Shore.

The Beach Theatre had been the subject of preservation efforts in the late 2000s and early 2010s, when the Beach Theater Foundation briefly leased the space in hopes of a renovation that would maintain the iconic architecture and keep a theater in the building. The organization attempted to block the demolition in 2011 with a lawsuit challenging the city's permit, but the building ultimately was torn down that fall.

Mita's vision for a hotel in Cape May comes at a time when the Jersey Shore town continues to gain ground as a more widely celebrated tourist destination, one distinguished by its architecture and history. Cape May routinely shows up on lists of the best places to vacation and continues to be a popular location for Airbnbs.

Before the hotel project can move forward, Cape May Mayor Zack Mullock said the proposal will have to be presented to the city's Planning Board, Zoning Board and Historic Preservation Committee.