After years of contentious preservation efforts, L&I has approved a plan to tear down the beloved building 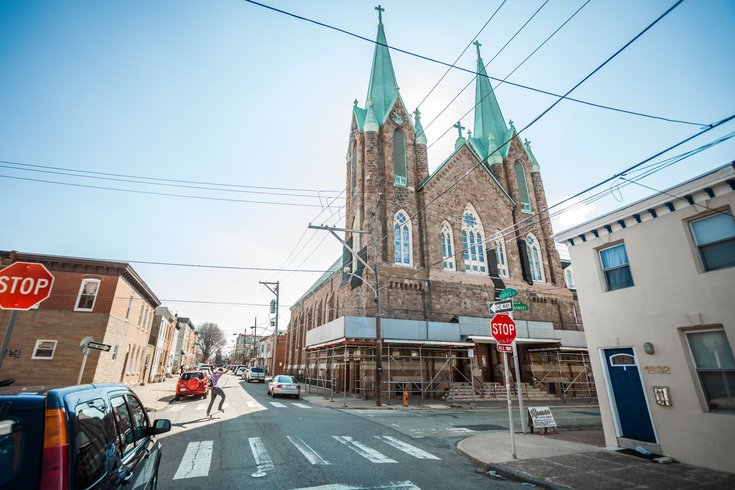 The demolition of St. Laurentius Church, 1612 E. Berks St. in Fishtown, could begin as soon as November, according to the Philadelphia Department of Licenses & Inspections, which issued permits for the 19th century building to be taken down.

The limbo of St. Laurentius Roman Catholic Church, a panoramic landmark of Fishtown that has stood in structural peril for years, likely will end with the historic building's demolition sometime this fall.

The permits for the church's demolition were issued Thursday by Philadelphia's Department of Licenses & Inspections, which approved an application from the building's New Jersey-based owner after conditions set by the city's Historical Commission were sufficiently met, L&I spokesperson Karen Guss said.

The church's historic status, earned during a years-long fight to preserve and safely redevelop the building, required that strict criteria be applied in order to justify tearing it down. The city's historic designation usually protects buildings from demolition efforts, but if a structure is deemed to be in imminent danger of collapse, it becomes subject to broader public safety considerations.

St. Laurentius, at 1612 E. Berks St., was built by Polish immigrants in 1882 and has been shuttered since 2014, after engineers hired by the Archdiocese of Philadelphia deemed the building unsafe. The church's parish had been merged with neighboring Holy Name of Jesus Parish the year prior.

The archdiocese, having deconsecrated the building, was prepared to tear it down in 2015 before the Historical Commission's protection put it back on life support.

Competing factions, neighborly disputes and differing estimates about the cost and feasibility of redeveloping St. Laurentius have raged on-and-off in Fishtown for the past seven years.

At one point, developer Leo Voloshin had planned to convert the church into 23 apartments units and preserve its historic exterior, but his efforts became embroiled in conflicts between local groups. Some felt the residential project was the only way to save the church, some aggressively fought to preserve the interior as a community center, and others felt demolition, for safety's sake, would ultimately be the best course of action.

In more recent years, chunks of the building's two towers, which support its striking spires, have on a few occasions crumbled off and fallen to the ground within a fenced-off safety zone that was established to protect the nearby St. Laurentius Catholic School and passersby to the property.

Some of the structural engineers who assessed the church's condition said it faced a "high likelihood that the towers will collapse on their own if not removed," according to L&I, which has long considered the building unsafe, at best.

After Voloshin's development plans unraveled amid court challenges and ongoing local disagreement, St. Laurentius was purchased in 2020 by New Jersey real estate developer Humberto Fernandini, whose initial interest in renovations was soured by the findings of engineers.

Fernandini decided to pursue demolition of the full structure, including the historically protected façade on Berks Street, by making a case to the Historical Commission in August of this year. He had received pre-approval from L&I in July after the department required that he justify the demolition of the façade in addition to the towers, north side and other remaining properties.

"The owner submitted a structural engineer’s report, which established that once the towers at each corner of the façade were removed, there will no longer be enough structural support to keep the façade from collapsing," Guss said on Thursday. "While enormous metal brackets could theoretically be installed to prop up the façade, the stones that make up the façade are so deteriorated that brackets cannot be reliably attached to them."

The structural engineer's report submitted by Fernandini concluded that the risk of a potential collapse and the proximity of occupied properties meant the façade should be demolished, as well. The Historical Commission had said in August that the façade could be taken down only as necessary to protect public safety, but the owner will be required to rebuild the façade as part of any future construction or other development on the site.

Demolition plans now approved by L&I require that the church be dismantled almost entirely by hand and monitored by an on-site engineer. L&I will conduct a series of mandatory and surprise inspections to confirm compliance.

Guss said the demolition process would not begin until mid-November or later. It's anticipated that it will be a complex process due to the building's age, materials, condition, significance and proximity to occupied dwellings on narrow streets that surround the structure.

With just six weeks to count down before the work could begin, it appears that St. Laurentius and its preservation advocates may be without any further recourse to keep the historic church standing.