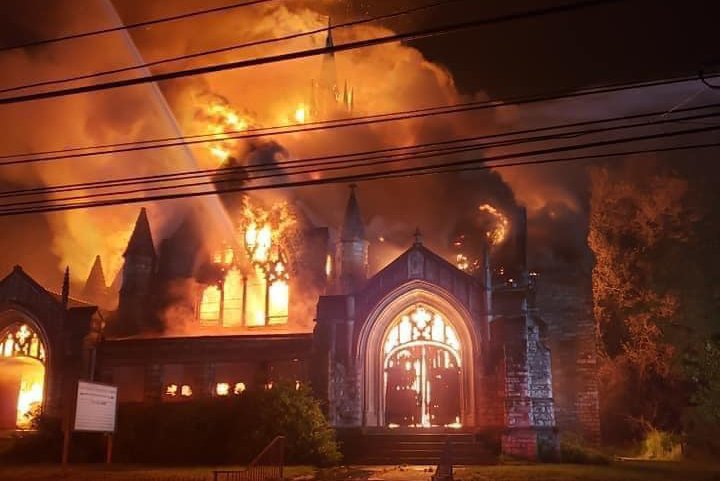 Third Presbyterian Church in Chester, Delaware County was destroyed in a five-alarm fire Thursday morning. The 125-year-old building was placed on the National Historic Registry in 2019.

The five-alarm blaze broke out at the former Third Presbyterian Church in Chester around 2:30 a.m, CBS3 reported. It took firefighters several hours to pacify the fire. They were still extinguishing hotspots around 6:45 a.m.

The fire has since been cleared, according to the Aston Township Fire Department, which was among the fire companies that responded.

The roof and steeple of the structure collapsed, and the interior also was ruined. Only the stone exterior remains.

No one is believed to have been inside the church during the fire, officials said. The fire also spread to a neighboring building, but the extent of the damage is unclear.

The church, which has not housed religious services for decades, was placed on the National Register of Historic Places in 2019.

The Chester Historical Preservation Committee had been restoring the building and using it as a meeting site. The committee had sought to turn the space into a performing arts facility.

The church was built in 1895 by architect Isaac Pursell, who was known for his English Gothic Revival church designs. Pursell also designed Christ Memorial Reformed Episcopal Church in West Philly, which was demolished last year to make way for residential units.

The fire is currently under investigation. The Bureau of Alcohol Tobacco, Firearms and Explosives has been called to investigate the incident, which is standard procedure for church fires, according to 6ABC.