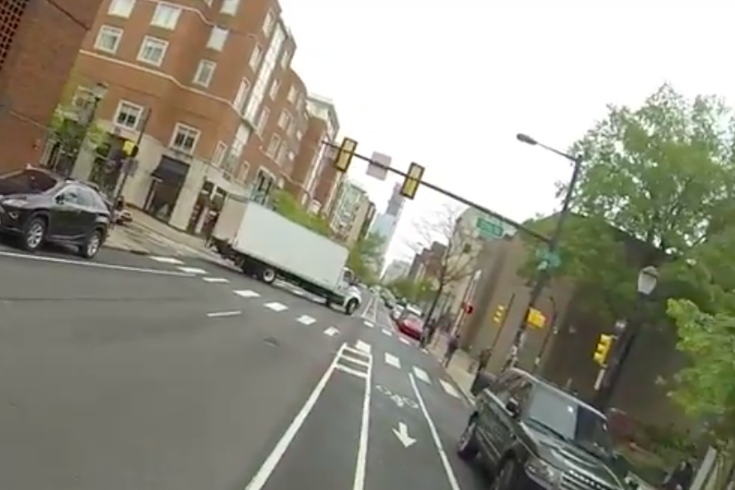 This screenshot is taken from a video that appears to show a truck driving the wrong way down Walnut Street in University City.

A video posted to YouTube Tuesday appears to show a dangerous traffic violation — straight out of "Planes, Trains & Automobiles" — occurring in University City.

The video was put on Philadelphia's Reddit page under the title "Truck driver drives the wrong way down Walnut St." In the footage, apparently taken from a GoPro camera, a truck seems to turn the wrong way on Walnut Street — a one-way street — at the intersection of 37th Street.

The video was posted on the channel Philly Bikes Lanes/Vision Zero, which has uploaded several videos that attempt to point out incidents in which the safety of cyclists is compromised by careless drivers.

A Twitter account with a matching moniker tweeted about the truck going the wrong way and claimed the driver was operating the vehicle erratically.

Today I watched a large truck turn left at 37th/Walnut and drive the wrong way against traffic for at least a block, swerving into bike lane

According to traffic laws, driving the wrong way down a one-way street is considered a "hazardous" violation.