What was this thing moving through the sky? 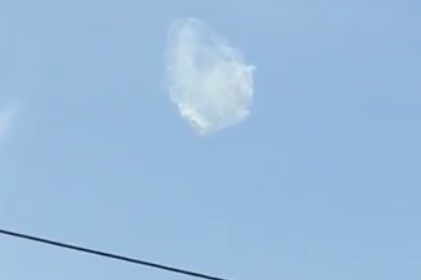 A video shot by Philadelphia resident Hector Garcia shows a strange substance in the sky above 7th and Tioga streets.

It's not unusual for our eyes to deceive us, which is at least one reason why most people feel historical sightings of UFOs can't be substantiated.

With smartphones, however, the question of alien life visiting earth has entered a new frontier. In fact, a video allegedly shot in Philadelphia has been making rounds lately and appears to show an atypical mass morphing its way across a blue sky above 7th and Tioga Streets.

The video, which has more than 1.2 million views, was shot by Philadelphia resident Hector Garcia, who describes a "cloud with sparkling lights in it" behaving like something he's never seen before. If you don't have great eyes, be sure to zoom in on the video to see the cloud shimmer. That's what's really strange about it. Did a chunk of cloud with a volatile electric field break off and have its own little storm of the century?

It could easily be CGI, but Garcia speaks so disinterestedly in the video that it's hard to imagine him going to the trouble. Some have suggested it's a large plastic bag or some kind of foam.

Nobody seems to know, but if nobody cares either, don't say you weren't warned. Whatever it was, look out for extraterrestrials and have your phones ready.