Police: Older white man, who may walk a small dog in the early A.M. hours, has been harassing neighbors for a year 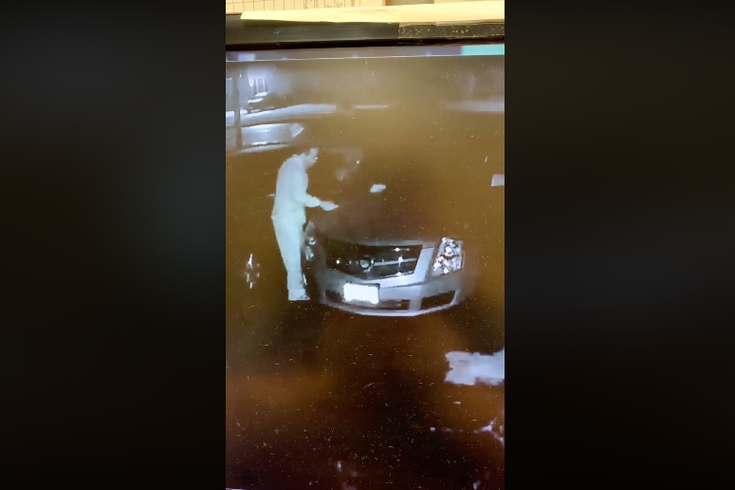 Police in Westampton, Burlington County, are looking for a 'code enforcement officer' imposter who has damaged cars and left nasty notes asking people to clean up their properties.

Westampton Township is a small Burlington County municipality not all that far from the Betsy Ross Bridge.

It’s also apparently home to a vigilante “code officer” whose disdain for unkept properties has led him to deface cars, slash tires and leave sternly worded notes at his targets’ properties.

The Burlington County Times reported on at least six such incidents in the township’s Holly Hills neighborhood in the past month.

Lt. Brian Ferguson of the Westampton Police Department told PhillyVoice on Thursday that the vigilante's reign of terror dates back at least a year, with an estimated $10,000 in property damages reported, he said.

To that end, the department has posted a 21-second “Criminal Mischief Investigation” video of the still-unknown suspect as he put a note on a vehicle around 4:20 a.m. Monday. (It’s part of a longer video, but the portion that shows the clearest view of the vigilante.)

“On at least three occasions the male has left a note warning the homeowner about the condition of their property and that he is not happy with it,” the post reads.

Some of the 80-plus comments left on the video by the public are along the lines of what you’d expect to see in such a situation. They include:

“He must live in the neighborhood. He looks like an older gentleman well not really a gentleman but guy. Should be easy to find.”

“What’s the matter, man jealous that there are better cars around him then he probably owns?” and

“What kind of loser has the time or energy to even think about doing something so ridiculous?! Hope this big baby is caught and taught a lesson.”

Catching the “big baby” is what’s on investigators’ minds as well.

While canvassing the neighborhood, Ferguson said “this guy goes back a year.” One of his recent targets was revictimized, the lieutenant said.

“It’s definitely the same guy. He leaves notes saying he’s a ‘new code enforcement officer’ and he’s ‘tired of your property looking like crap because it impacts home values,” Ferguson said. “We got him on video this time around.”

The suspect has slashed or let air out of tires, or used a straight-edge razor to damage vehicles’ paint jobs.

Ferguson said media attention to the case has helped since the neighborhood is home to older residents who may not see Facebook posts about it.

“Nothing yet, but I’m hoping we’re close,” Ferguson said of the investigation that could see the vigilante charged with criminal mischief. “The time frame is from 3 to 4:30 a.m. He’s an older male, late 50s or early 60s, we think.

“He may walk a small dog during those hours as well, though we don’t see it on the video. One resident said, ‘I know that guy but I don’t want to get involved.’ We’re going to go back and talk to him later today.”

If that interview doesn’t close the case, anyone with information about the “new code enforcement officer” is asked to call Westampton Police at 609-267-3000, before he strikes again.