Plus, young Philly performers show their 'way' of vogue 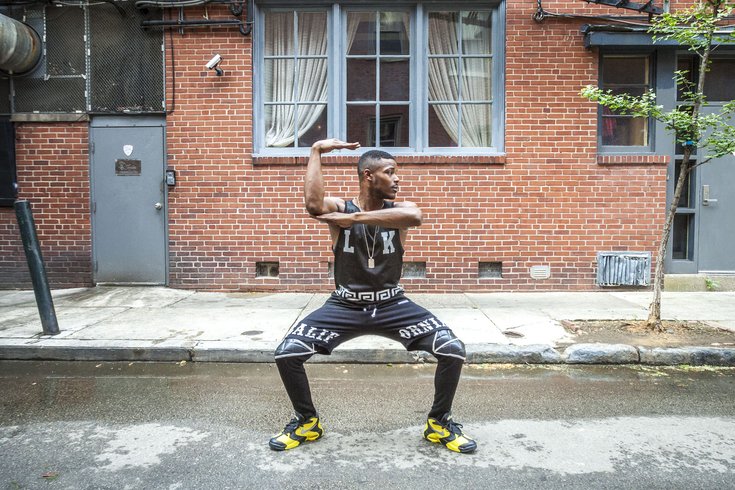 Alas, that hasn't been the case. Or at least not quite.

Voguing, a highly stylized and runway-model-inspired dance born out of Harlem house ballroom culture from the 1970s (or earlier, depending on who you ask), still springs up on television shows, in music videos and in Facebook feeds everywhere in the form of viral Channing Tatum voguing GIFs. And while it might be in limbo as neither the most popular dance of the day nor the most under-the-radar, its presence in Philadelphia still persists from when dancers first trickled here from New York in 1990.

It's just not the "underground" scene it used to be.

"We've really been out from the 'underground' for years," Alvernian Rafeek, founder of Philadelphia's "House Prestige" told PhillyVoice of the city's scene. "Facebook and YouTube have made being underground impossible."

Thanks to the Internet, Rafeek said, the ballroom scene -- voguing especially -- has evolved into an art form that's more competitive and international than anyone could have anticipated two decades ago. "House" chapters, which are family-like collectives, have now surfaced everywhere from Paris to Japan. And, also because of the Internet, there's been an interesting trade-off of how balls operate: More competitions are happening than ever before, but those balls become less concentrated as a result -- giving the appearance that the community has dissipated.

What's to blame for that? The Internet, of course.

"We can watch entire balls on YouTube the next day, so there's no urgency to be at a ball because you watch it online the next day," explained Kemar Jewel, an internationally recognized Philadelphia vogue performer who's locally most famous for his elaborate SEPTA choreography.

Jay Blahnik: Imagine being a very effeminate gay male, and all your life being teased for being effeminate. And suddenly, you get into a scene and your femininity is celebrated -- you can do actions and mannerisms that show off that femininity.

While exact audience attendance comparisons are difficult to make, considering ballroom in Philadelphia is poorly documented, longtime Philly ball dancer and House of Blahnik founder Jay Blahnik told PhillyVoice that the first Philly ball he hosted in the mid-'90s at 13th and Locust streets drew about 1,000 people. Today, he said, that same ball might attract a few hundred people at best. Blahnik, too, attributed that smaller turnout partly to the Internet, but also to progress being made toward LGBT acceptance -- an unintended blow to a dance community born out of LGBT marginalization.

"Imagine being a very effeminate gay male, and all your life being teased for being effeminate. And suddenly, you get into a scene and your femininity is celebrated -- you can do actions and mannerisms that show off that femininity," he said. "[Ballroom culture] is about being celebrated and appreciated for who you are.

"But without that need to be there," he added, "you're obviously going to lose a lot of people."

All the same, whether the scene's dwindled or not, Philly maintains an active and talented collection of ballroom dancers and vogue performers. Today's community is mostly (though not exclusively) comprised of LGBT teens and 20-somethings, including the dancers we've captured below who, in an effort to be transformative, continue to blend old styles of voguing to create something altogether unique. They're young people who, certainly, might embrace the prestige of social media fame if it comes along but still compete in balls for the same rush of uninhibited self-expression and blanket of comfort sought by past generations of the culture's gay youth, trans women, drag queens and more.

And so the tradition continues.

"We're a family," 25-year-old Eddie Gillis, from Germantown, told PhillyVoice of his "housemates." "That's something you don't see in video clips."

A dancer since he was 8 years old and part of House Prodigy since 2011, Gillis is known in Philadelphia for his female figure performance and vogue femme dance style -- what community consensus says is Philly's most popular form of vogue. He describes voguing as a feeling of limitlessness and the best means he has to express himself.

“I think a big misconception of the entire ballroom scene is that it’s just a bunch of gay people going to be gay. Like, they’re 'fags,'" he said. "But there are a lot of LGBTQ people who participate in the ballroom scene because it's where we get to be the most creative. In my opinion, gay people are some of the most expressive, creative people -- hairstyles, how we do makeup, a lot comes from us."

That list also includes dance styles. New forms of vogue popping up today, he said, signal the fact that many newcomers are trying to use their individuality as the main ingredient of their style, rather than subscribe to a single class of vogue -- Old Way (re: pre-Madonna, inspired by hieroglyphics and runway poses), New Way (re: post-Madonna and comparable to miming) or Vogue Femme (a modern, effeminate fluidity).

Inevitably, he said, vogue as a dance style is constantly evolving because of the revolving door of young people.

"There's always a new generation," he said. "Every year there's somebody new because kids are always growing up, and they're always finding themselves."

Henry Watts describes his movements as "sharp, precise and creative." Much of his dancing involves movement born from Vogue Dramatics, best evidenced by the "death drop" captured above. Thom Carroll / PhillyVoice

A 25-year-old member of House Prodigy and lifelong dancer, Bucks County native Henry Watts got involved in ballroom culture after being convinced by friends -- who recognized his talent -- to give it a go.

By the time he joined Philly's House Prodigy, he'd gained about 100 new friends -- for perspective, think of it as gaining fratmates who all share the same passion for dance creativity and competition. Together with what he lovingly refers to as his "family," they "walk" (that is, compete) in balls about once every three months. Watts last performed (and won) at the annual Dorian Corey Philly Awards Ball in February.

It's the young people, Watts explained, who allow vogue as a dance style to stay fresh.

"It’s always the youth [who keep it going]. They always take it and try to go to the next level with it," he said. "Back in the day, [performers] also took it to the next level; we’re trying to follow in their footsteps and do the same thing -- only bigger and better.”

Twenty-three-year-old Chastity "007" Brown ("007" because she's not affiliated with a house) began voguing when she was 15. Always a fan of club music, she ventured out one night for a friend's birthday and was mesmerized by a vogue performer she spotted on the dance floor.

"I remember being so excited and wanting to try it," she told PhillyVoice. "And when I did, I was addicted."

She describes her technical form as rooted in vogue dramatics, explaining that the flexibility of the style allows her to perform based on mood. It's dancing as a form of catharsis.

"Usually when I’m a little agitated or upset I do vogue dramatic because you can really let go of anything -- all the emotions you have that day," she said. "Instead of being depressed or sad, you just dance."

Which gets to the point: Nearly five decades into modern vogue, dancers still are finding ways to reinvent it -- not just to catch fire on the Internet, as a cynic might speculate, but to unleash their own evolving feelings about life with every dramatic snap, pop or drop in their arsenal. It's a preserved form of expression and, frankly, a touchstone legacy for an LGBT community that, too, is evolving.

"There's more to vogue than just the music and dance," Brown added. "It's a community, and it's a lifestyle."

To learn more about house ballroom culture, visit the African American Museum in Philadelphia's "Legendary: Inside the House Ballroom Scene" photo exhibit, which runs through Aug. 16.