Pope Francis arrives as pilgrims gather to greet him

'Seeing the pope is not only interesting, but important to us,' said one young pilgrim

By By Christina LoBrutto and Hayden Mitman

Pope Francis, to the strains of the iconic "Rocky" theme song, landed in Philadelphia Saturday morning, giving the city its turn in the international spotlight during the pontiff's historic visit to the United States.

During his flight from New York City, he reportedly flew over the Statue of Liberty and Ellis Island, the entry for generations of immigrants.

After arriving at Philadelphia International Airport, Francis greeted Pennsylvania Gov. Tom Wolf, Mayor Michael Nutter and the Richard and Bernadette Bowes family, the Philadelphia family selected to represent the city. Their daughters gave flowers to Pope Francis as he hugged the two girls and Bowes' son.

But in a gesture that moved the region, the pope, before leaving in his now iconic Fiat, also ordered the driver to stop so he could kiss a severely disabled child in a wheelchair who was waiting along with scores at the airport.

The child, Michael Keating, 10, of Elverson, Chester County, has cerebral palsy and is the son of Chuck Keating, director of the Bishop Shanahan High School band that performed at the pope's arrival.

Pope Francis kisses and blesses Michael Keating, 10, of Elverson, Chester County, after arriving in Philadelphia and exiting his car when he saw the boy. (World Meeting of Families)

The historic visit by the pontiff was an event not to be missed by Brian Flores, who traveled 30 hours from Minnesota with his family and two others.

Camping out along the Benjamin Franklin Parkway – since 5 p.m. Friday – the group of 14 pilgrims will remain there all weekend.

Flores, 16, who has received the sacraments of Communion and confirmation, said his family has become more religious and involved with the church in recent years.

"Five years ago this wouldn't have been important to my family," he said, as the sun came up over the Parkway. "Now seeing the pope is not only interesting, but important to us."

Flores was part of a crowd that looked undersized to some – even at 8 a.m. As the morning progressed, more pilgrims began to arrive, but some volunteers were initially worried about the slow trickle of people. 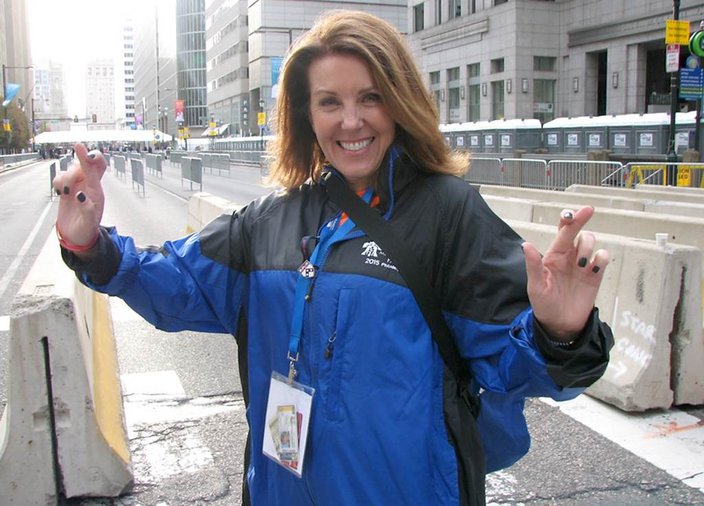 “I’m surprised at the lack of people so far,” said Jennifer Snow, of West Chester, a volunteer working a security checkpoint at JFK Boulevard and 18th Street in Center City. “I’m hoping they are going to come. It’s the biggest party.” (Frank Burgos / PhillyVoice)

Volunteers at a security checkpoint at JFK Boulevard and 18th Street said they were surprised at the relatively few people who had shown up so far to greet the pontiff early Saturday morning. Some 12,000 local Philadelphians have volunteered to help the pilgrims in the city.

“I’m surprised at the lack of people so far,” said Jennifer Snow, of West Chester. “I’m hoping they are going to come. It’s the biggest party.”

All the early talk by city officials about security has been a “deterrent,” she said.

“I think initially they told the worst-case scenario, but they’ve started backing off,” she said.

Those who attempted to bring certain souvenirs into the security zone, no matter how innocuous they seemed, were told to hand them over where they were dumped into a box of prohibited items. 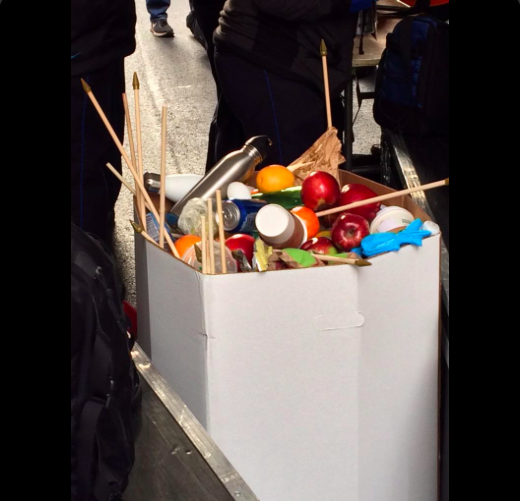 Still, the excitement was obvious in many of those gathered along the Parkway. They said they came to glimpse one of the most popular popes ever, but with admiration and respect in their hearts for the Holy Father and his message.

Sister Mary Theo Milla, who traveled here from Nigeria for the World Meeting of Families Congress, was up early in anticipation of the pontiff's visit.

A member of the Sisters of Immaculate Heart of Mary, Milla said Pope Francis has made fellow Catholics once again proud of their religion.

“In this day and age, when Catholics are relegated to the background and people are almost ashamed of being Catholic, the whole country has stopped to wait on the pope,” she said, adding it was gratifying to “look at this country and see this much respect for him.” 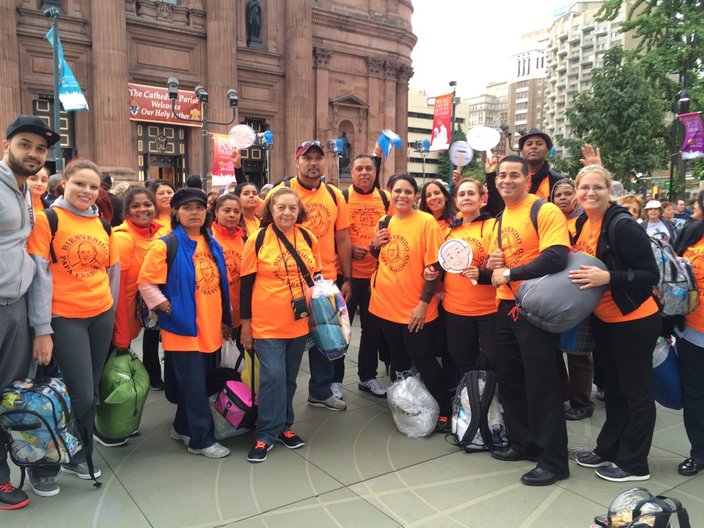 A group of 55 pilgrims from North Jersey is excited about being in Philadelphia for the pope's visit – and happy to be sharing the experience with each other. (Christina LoBrutto / PhillyVoice)

Dressed in matching bright orange shirts, 55 pilgrims from North Jersey wanted to experience the papal visit as a group.

Parishioners at Saint Aloysius Catholic Church in Jersey City, they all traveled together to see the pope. Their hard-to-miss shirts are emblazoned with their patron saint's face.

"This experience is about the families and we enjoy being with the group," said Manny Gonzalez, a Saint Aloysius parishioner. "Obviously we are trying to see the pope, but our main thing is the faith we have in our family." 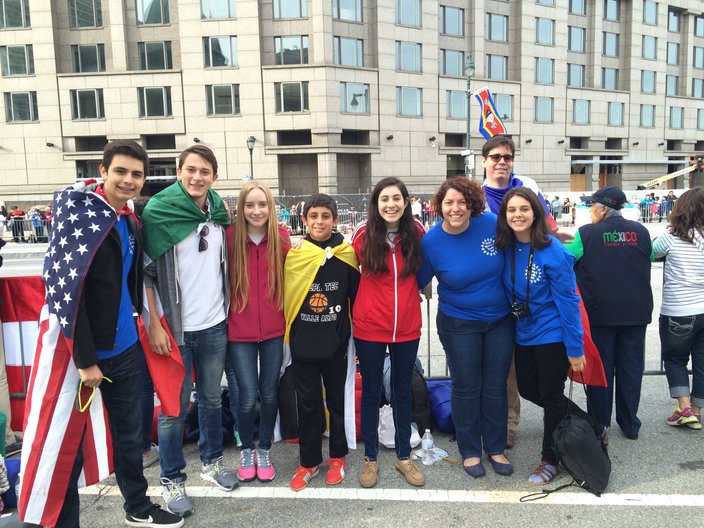 This group of faithful drove all the way from Houston to help Pope Francis celebrate his visit to Philadelphia. (Christina LoBrutto / PhillyVoice)

Another group – 17 friends who drove 1,548 miles in 32 hours from Houston to be here this weekend – says they, too, came as an extended family to see the pope.

"He's an inspiration for us," Carmen Sanchez Romero said. "We are all about family."

For many pilgrims, their papal pride stirred in their hearts. For some, however, it covered their faces.

Emoji masks bearing Francis' image looked to be quite popular with all ages.

As the morning progressed, more pilgrims could be seen trekking down Market Street to City Hall, where they would turn to head down the Parkway. 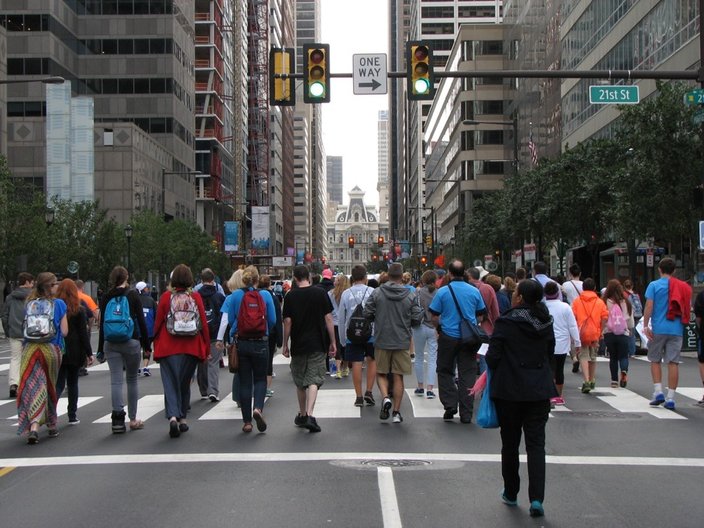 Pilgrims made their way down Market Street to see Pope Francis at the Ben Franklin Parkway. (Frank Burgos/PhillyVoice)

Tommy Arellano, of Sandusky, Ohio, along with his friend William Tolsma, drove close to seven hours to get to Philadelphia in time to greet the pontiff. He plans to stay through Sunday, when he hopes to attend the papal mass. 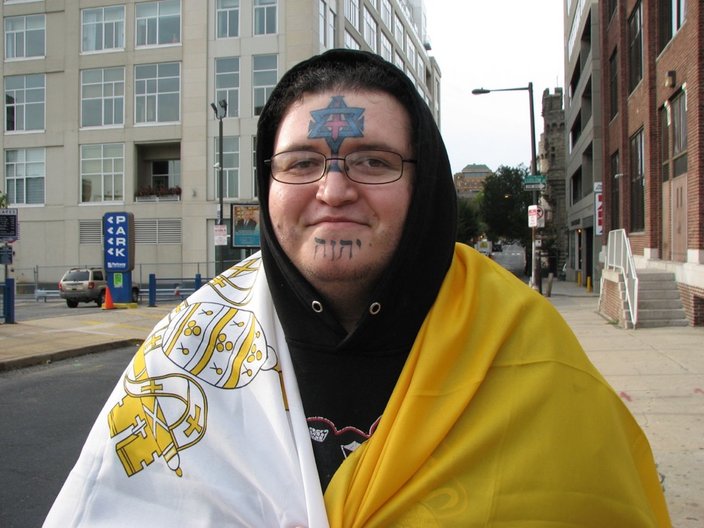 Tommy Arellano, of Sandusky, Ohio, said his tattoos celebrate his Catholic faith. The tattoo on his forehead is of the Star of David entwined with the cross. On his chin is a tattoo of the Hebrew word for God. (Frank Burgos/PhillyVoice.)

"This is the pope, the leader of Christianity pretty much," he said. "He's also the first American pope since he came from Latin America."

As a fellow Hispanic – Arellano is Mexican – Pope Francis had even more special meaning for him.

"He's very special to us, and as Catholics, we want to share the spiritual experience of the mass with Pope Francis."

While the excitement began to build Saturday morning, some were confused on how to get around.

Among those was Democratic mayoral candidate Jim Kenney, who was speaking with security near 4th and Arch streets, trying to figure out where he could enter the security zone.

"It's a Jesuit school," said Kenney, who has lobbied Mayor Nutter to use Pope Francis' visit as an opportunity to address LGBT issues. "For better or worse, it made me who I am." 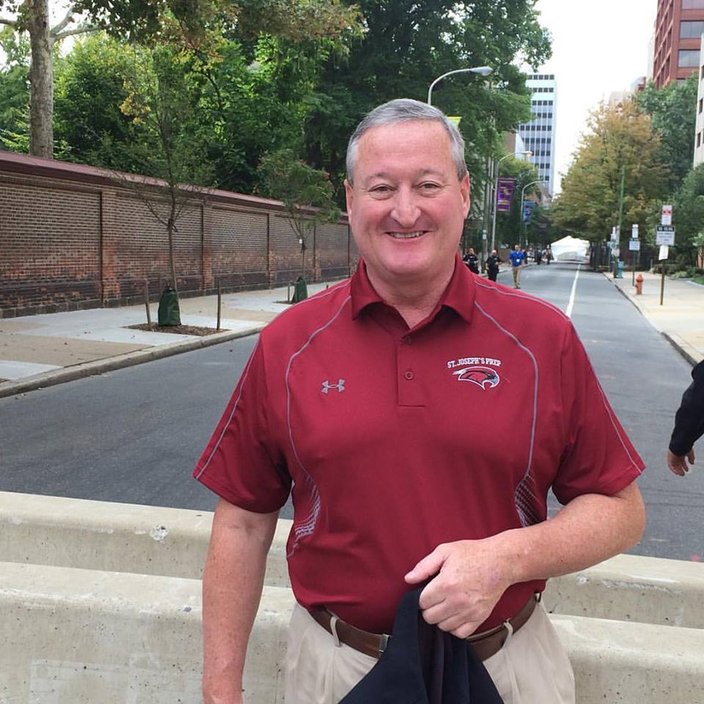 On Market Street, near 21st, many pilgrims walked passed Nathan, 27, a homeless man from Allentown, but some also stopped to offer food and words of encouragement as they walked to see a man who has made helping the poor a central focus of his papacy. 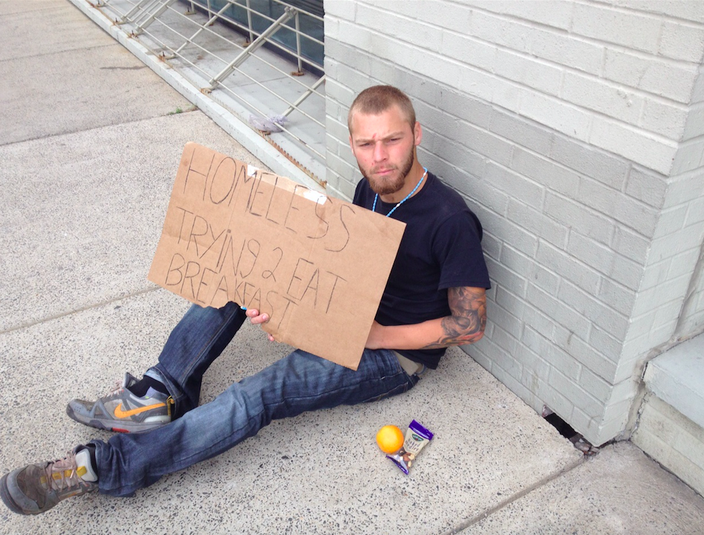 Nathan, a homeless man, "can't get a bed anywhere until this pope stuff is over with," he said. (Frank Burgos/PhillyVoice)

Nathan, who declined to give his last name, lost his apartment after being incarcerated for violating his probation on a theft charge, he said. He spent a sleepless night before the pope's arrival on the street, he said, shaking as a cool breeze blew over his thin frame.

"I'm a Christian," he told PhillyVoice, explaining why he was wearing a crucifix. "I'd like to see the pope."

But for now, food was the imperative.

As PhillyVoice walked away, a pilgrim stopped to give Nathan some food from his backpack and wish him well.

This will be the second time that Raul Pena, 64 and his wife Elena, 66, of Independence, Oregon, have seen Pope Francis.  The couple, below, also saw him in Brazil for World Youth Day in 2013. 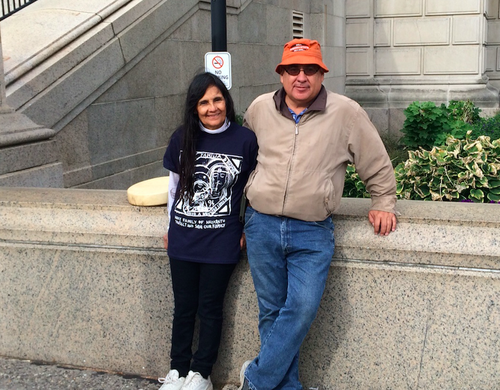 "We see him as a spiritual leader, " said Raul Pena.

They have been in Philadelphia since Tuesday, after some sightseeing in New York.

Elena Pena said she thinks this pope is special because she has seen her friends become more religious thanks to his attitude and teachings.

"They (her friends) are really happy with what they hear from him," she said. "A lot of people are really positive."

Helping to feed the masses were Alex Buckner and Alison Shebest, who worked the Local 215 food truck. They were patiently awaiting business. The truck is selling pulled pork and chips ($12), among other snacks.

"It's a privilege and an honor," Buckner said. "We're excited to have been selected to feed people this weekend. And hopefully see the Pope!"

By Christina LoBrutto and Hayden Mitman