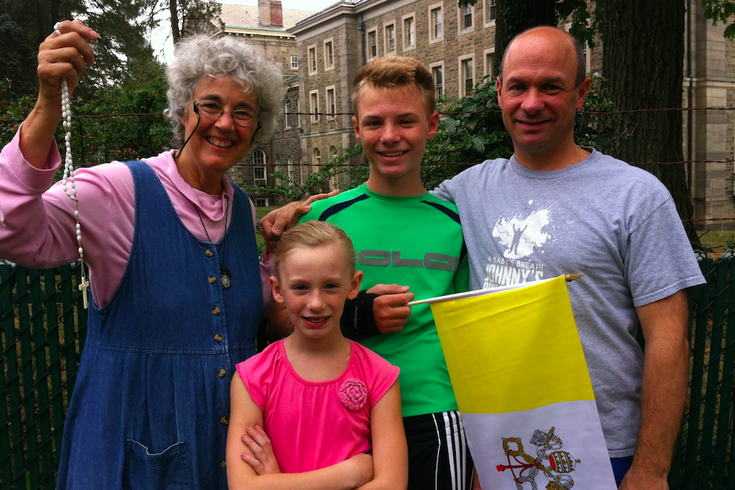 Louise Barba, of Rhode Island, held a rosary against the fence at Saint Charles Borromeo seminary in Wynnewood. She will attend the papal Mass with her family on Sunday.

Pope Francis arrived at St. Charles Borromeo Seminary in Wynnewood, Montgomery County, on Saturday afternoon with about 150 people there waiting for the pontiff’s arrival.

The pope went to the seminary after delivering a homily during Mass at the Cathedral Basilica of Saints Peter and Paul in Philadelphia.

Holly Roth, a Wynnewood resident and a Catholic, knew the pope was staying at the seminary Saturday night but wasn’t aware he was stopping by Saturday afternoon.

After seeing on TV that the pontiff was headed to her neck of the woods, she grabbed her dog and headed out to City Avenue.

Roth, 55, is a fan of the message that Pope Francis has brought to America.

“I think it’s wonderful," she said. "We have sorely needed his support considering the church’s recent past.”

Roth wasn’t the only local to make her way to City Avenue following the pontiff’s arrival.

Peter Gorllman, 42, said the atmosphere in his neighborhood was “collegial.” He’s Jewish, but said the pope’s recent words appeal to many.

“I think he’s spreading messages that appeal to many different people,” Gorllman said. "He appears to be well received given the number of people in the U.S. that are interested in his visit.”

Mixing with the locals were several people who made their way from across the country to the Philadelphia area to try and catch a glimpse of Pope Francis.

Louise Barba, 65, of Rhode Island, is in for the weekend visiting her niece and has tickets to Sunday's papal Mass on the Parkway.

She held a rosary over the fence of the seminary following Francis’ arrival and added that the scene in Wynnewood was “peaceful and hopeful.”

Barba said she was looking forward to hearing the pope’s message on strengthening the family, especially considering her niece, along with her husband, have six children.

She was also looking out for Francis’ well-being.

“I’m praying for his health and strength,” she said.

Lower Merion resident Jennifer Sherman brought her three daughters, Lillia, 6, Eliana, 9, and Brielle, 11, out to try and sneak a peek of the pope. 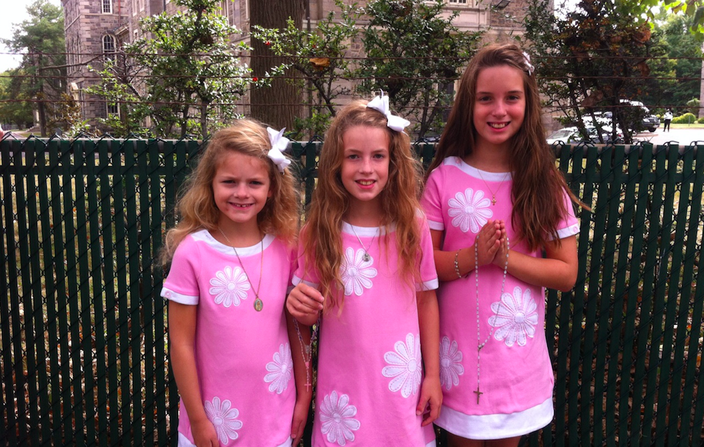 "Mommy, I still wanna stay here cause we're near his presence," Brielle Sherman tells her mother as they waited in hopes of seeing Pope Francis at the seminary. (PhillyVoice)

They weren't able to, but that didn't stop her children from understanding the gravity of the situation.

Sherman's mother met Pope John Paul II, and she was happy to keep a papal tradition within the family.

Her oldest daughter Brielle, a student at Regina Angelorum Academy in Ardmore, said she wanted to stay near the seminary despite realizing they most likely wouldn't see the pope.

"She said, 'Mommy, I still wanna stay here cause we're near his presence.'”