The regional finals keep rolling in our all-time Sixers one-on-one bracket, and this one features a David vs. Goliath matchup, with Allen Iverson taking on Moses Malone in our quest to find the best one-on-one player in franchise history.

As a reminder, here's what the Allen Iverson region looks like after being updated to reflect results through the Sweet 16. 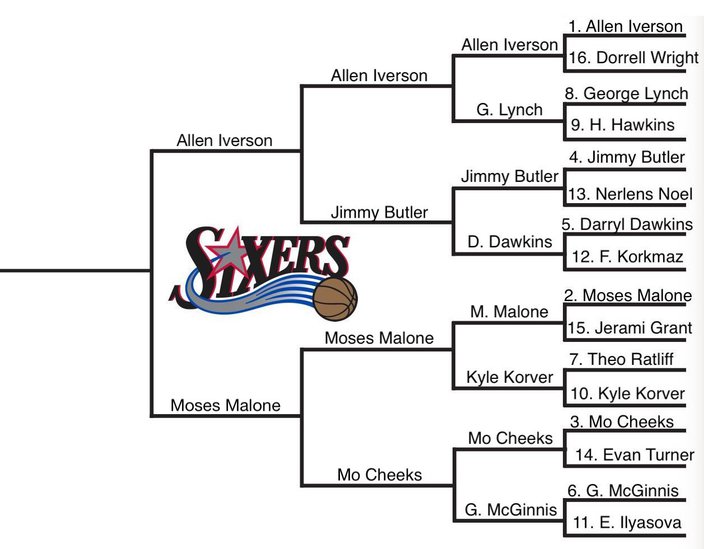 Here's how the Iverson region split in the previous round:

I can't say I am surprised that the fan-favorite of my lifetime triumphed over Butler, who fled the scene last summer, but at the very least that matchup should have been a lot closer. Butler's size, toughness, and tough shotmaking ability would have given Iverson a lot of problems, as we discussed in the Sweet 16 post last week.

Nevertheless, Iverson moves on comfortably, setting up the most fascinating stylistic battle of the regional finals so far. Let's get into it.

It is one of those hypotheticals that you would love to see play out in practice. Can the center from the 1970s and 80s stay in front of the scoring guard with an electric first step, and can the diminutive guard stop from being absolutely bulldozed whenever his opponent has the ball? The game is tilted toward the player who can exploit their advantage on offense the most. On first glance, you might say that favors Iverson, a prolific scorer at the peak of his powers.

But I think it ends up working out the other way. The size difference between Malone and Iverson is unlike any we have seen up to this point in the tournament, with Iverson giving up at least 10 inches and 50 pounds to Malone based on their listed heights and weights, and having met Iverson a few times I honestly believe the gaps are probably bigger. Malone would tower over him, and when it's just you against one other guy on an empty court, size and strength advantages make a huge difference.

Giving up that much size, Iverson would be forced into a lot of gambling for steals with Malone throwing his ass into Iverson's chest. If (and when) he loses on those gambles, Malone would have a clear look at the rim. Even when he wouldn't, Malone could shoot over Iverson with ease on basically every possession, confident Iverson would never get into his airspace to block a shot.

I wasn't around for his glory days, but for those who didn't get to watch him during his peak, it's worth noting that Malone's enduring reputation as a tireless worker and glass hound undersells his skill level. If you watch old games from MVP seasons with the Rockets and Sixers, he had a little bit of everything relative to the time period — free-throw line jumpers, shots off of the glass, and he was plenty comfortable abandoning a post-up attempt to find the ball and cash in from a face-up.

Each player has one of their potential trump cards taken away as a result of the rules. Without the ability to dribble freely, Iverson can't lull Malone to sleep with his handle or dribble around him until he tires, forcing him to win with quick, decisive moves. On the other hand, Malone's title as the best offensive rebounder of all-time means nothing here, forcing him to win with touch, rather than relentlessness.

(Sidebar: the gap between Malone and everyone else in league history on the offensive glass is downright comical. With 7,382 combined offensive rebounds between the ABA and NBA, Malone is over 2,500 rebounds in front of his next closest competitor, Artis Gilmore. To put that into perspective, the gap between Malone and No. 2 would rank in the top-50 in NBA history in total offensive rebounds.)

The reason you can't totally count out Iverson? There's always a chance he just goes on a heater and takes advantage of a Malone miss by answering with a huge scoring barrage. Iverson's efficiency numbers were never all that great, but his games were often defined by high peaks and low valleys. He could be in a slump for 3/4 of a game and then catch the holy ghost in the fourth, winning games with a devastating run, or even pull the opposite, exploding in the first half before doing nothing in the second.

I feel like I have written some variation of "I don't love Malone in this format" in every post he has been involved in, yet he seems like he could move on here. We shall see what the electorate thinks.