Our last regional final of the Sixers one-on-one tournament is a doozy, pitting two teammates from one of the best teams in franchise history against one another, battling for the right to move on to the Final Four.

Here's what the Julius Erving region looks like after being updated to reflect results from the Sweet 16: 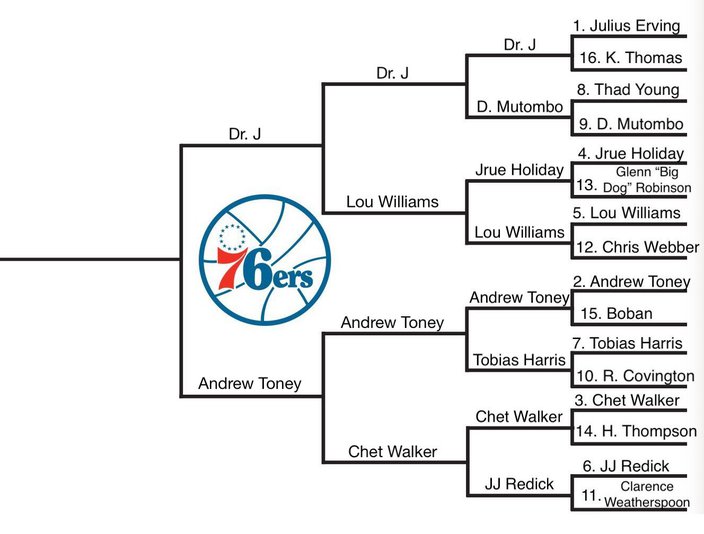 Here's how the matchups shook out in the sweet 16:

I was a little surprised that Erving won by as large of a margin as he did, but these were ultimately the right outcomes.

The final matchup is probably my favorite of the four from this round, so let's talk about it.

The most fascinating thing about Julius Erving's career is that many people believe his best days came before he joined the Sixers in the mid-1970s. It is a staggering thing to think about a player who was an All-Star every year of his career and the NBA MVP for the 1980-81 season, but Erving was dominant during his days with the Virginia Squires and New York Nets, so it's not totally unfounded.

While Erving's numbers dipped after making the jump to the NBA, there is no discounting the impact he made by joining the Sixers in 1976. Erving joined a young but talented team that had fallen in the first round of the playoffs a year prior and took them all the way to the NBA Finals, where they would lose in six games after taking a 2-0 lead to begin the series. It was the first year of a seven-year stretch (save for one season, 1978-79) where the Sixers would make it to at least the Conference Finals every season, culminating in their 1983 championship season.

Erving's contributions during that stretch are also the reasons he would be a tough out in a one-on-one tournament. His length and athleticism gave him a chance to finish at the rim over and around just about anybody, with Erving able to explode from a stationary position and catch his defenders off-guard. While Erving's best defensive work was probably done away from the ball, his prototypical size and recovery speed allow him to erase a lot of mistakes/misreads, and I suspect he would come up with a few chase-down blocks in a one-on-one game, just as he did in normal games.

The question is whether or not all of that would matter against Andrew Toney, who played as if he believed he was the baddest MFer on the planet at all times. Perhaps he even was on occasion, as his exploits against the Boston Celtics seemed to prove. Erving's jumper posed problems for him at times, while Toney was a threat to score from anywhere and everywhere on the floor. Celtics players from that era cite Toney, not Erving or Moses Malone, as the most dangerous man on Philadelphia's roster.

“There’s always a little bit of stress when you guard the great ones,” former Celtics guard Danny Ainge told The Athletic in 2019. “I put [Andrew Toney] in a category as (one of) the great ones, because you just knew he was capable. I wouldn’t say he had as good a career as the Isiah Thomases and the Magic Johnsons or the Michael Jordans or the guys like that, but you certainly prepared for him equally, because he was capable of having a special game against you at any time.”

It's remarkable to watch some of those classic Sixers teams and see Toney commander the offense while guys like Erving and Malone are waiting for touches, but Toney had the offensive gifts to justify seizing the reins. He could score in every way possible, from stepbacks to leaners to blow-bys, the last of which Erving was susceptible to at times in spite of his gifts.

Erving's jumper, of course, is less of a concern in a setting where teams couldn't pack the paint or zone up to stifle him, and his best offensive work in a halfcourt setting was done from the mid and low post, areas where he would continue to have an advantage over the smaller Toney. While post-centric players scare me in this format generally, Erving's ability to explode out of a stance and finish cleanly anyway erases a lot of worries for me.

I am going with the region's namesake here, with the caveat that Toney has a good case against Dr. J or just about anybody else.