Voters decide which mural will rise in Fishtown 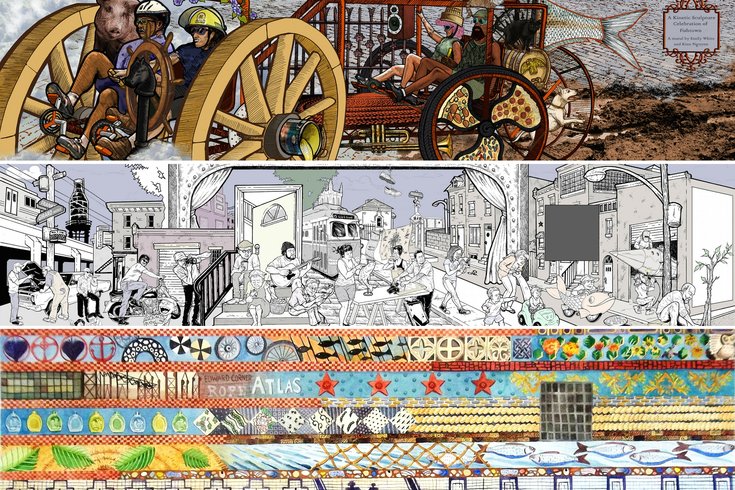 The Philadelphia Federal Credit Union in July called for artists to submit designs for a new mural to be erected in the Fishtown area. They were asked to imagine a mural that would incorporate both local neighborhood history and the project's sponsor, PFCU, into one image. After receiving many submissions - accepted from those living or working in the Fishtown and East Kensington communities, to keep it local - three design finalists were chosen in August.

Now, the public will finally be able to see those winning designs, one of which will be installed at East Dauphin Street and Frankford Avenue in time for the 2016 Kensington Kinetic Sculpture Derby next May. The teams behind these designs, Jeffro Kilpatrick and Brad Carney; Marie Elcin; and Emily White and Kien Nguyen, all hope to find community support for their work. That's because, in the end, their friends and neighbors will be voting for the winner.

Beginning with a special kickoff reception event Friday at 6 p.m., the public will be able to view the finalists' designs in the PFCU Fishtown Branch (2136 E. Dauphin St.) during normal operating hours through Oct. 16. During those two weeks, the public can cast a vote for their favorite design on PFCU's Facebook page. The winner will be announced Oct. 19.

Though each competing design hopes to tug on the neighborhood's heartstrings, the artists all took a different approach. White and Nguyen, for instance, have focused on the iconic Kensington Kinetic Sculpture Derby to represent the neighborhood's "kinetic energy."

Their design will feature a theoretically working, human-powered machine like those found in the derby, using three-dimensional elements to bring it to life. It also includes nods to quirky local symbols like Greensgrow Farms' Milkshake the Pig and, of course, some fish.

"We're definitely designing to please the community," White said. "We’re using things very specific to Fishtown that we hope the community will recognize."

"We're influenced by a lot of the art that’s in the neighborhood – murals and things that have already been around – and using that as inspiration, too," Nguyen noted.

Marie Elcin's mural takes a deep dive into local history. Her approach was inspired by a discovery that some of Elcin’s ancestors, going back three or four generations, lived right around the corner from her current Fishtown home. That direct connection to history and curiosity about what her neighborhood looked like years ago sparked her design's theme. 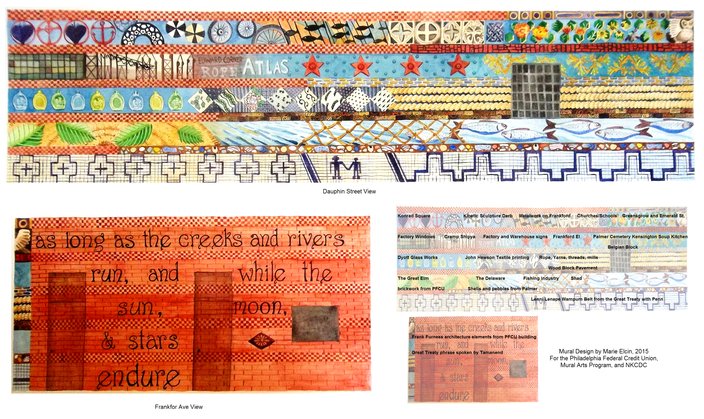 "There are always layers of history," Elcin said. "It’s all around us, these remnants of history, especially in our neighborhood ... I wanted [the design] to be in layers, like strata of history. Like how the Grand Canyon has layers, we have layers."

In her design, the foundation layer of Fishtown's history begins with the Lenni Lenape Native Americans who originally inhabited the area. From there, the layers build, taking the viewer through the area's early fishing economy, the Industrial Revolution of the 18th and 19th centuries, the creation of the elevated Market-Frankford Line in the 20th century and the local farms and public art of the 21st.

"I'm primarily a fabric artist and am always using patterns in my art, and I think, overall, my design feels like a textile," Elcin said, "because stripes are typically a fabric pattern and the layering makes it look like a striping. All of these things I found, I put into repeat so it has a pattern to it and it's unifying with color, too."

Kilpatrick and Carney looked at the design project from the point of view of passersby. Thinking about what others would like to see every day, they wanted to combine Kilpatrick's historical view of the area with Carney's contemporary knowledge of its art scene and vibe. They combined their aesthetics for the mural, using a series of sketches Kilpatrick had made of the area as a jumping-off point.

“I always like to have an emotional response in murals, so I would hope they would step away with that, with a sense of joy."

Points of reference for their design include iconic items of past and present, like milk bottles and Arctic Splash iced tea, with bricks, cobblestones and Fishtown's industrial warehouse textures.

"I'm a stoop culture kind of guy," Carney said. "There’s a prominent element of a stoop culture in it, and we’re trying to come at this with a neighborhood barbecue, party kind of atmosphere."

The artists have yet to see each other's designs, but they each hope Fishtown sees theirs as the truest representation of the neighborhood. They'll all be on location for Friday's PFCU opening reception. Artists will discuss the stories behind each of their proposals and chat with locals. Only time - and Facebook - will tell which mural ends up on top.