WATCH: Jersey Shore gets big nod for nor'easter 'Wave of the Day' 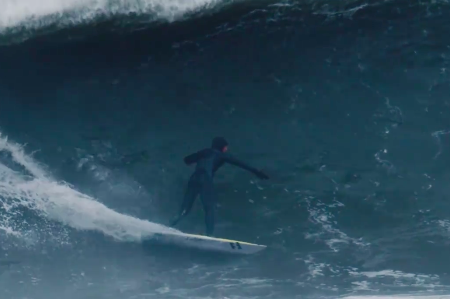 In an ongoing effort to pretend it's not cold, slushy and gross outside in the middle of March, we turn to a post from a pro surfer based out of Ocean City, who, instead of sipping hot cocoa this week, decided to brave the angry sea.

Rob Kelly, who surfs for Billabong and serves as the company's marketing manager, teamed up with videographer Alex DePhillipo to get some footage at an undisclosed location on Long Beach Island.

While most casual observers of the sport associate huge waves with states like California and Hawaii, it turns out the Garden State can hold its own. The video below, dubbed "Barrel of the year in New Jersey," has been viewed nearly 200,000 times.

One commenter summed this up perfectly: "ice cold water too, dude is a stud."

Despite Kelly's status in the surfing world — he's been sponsored since he was 15 — he once told SurfersView why he mostly prefers to stick around New Jersey.

"It’s pretty much all that I know," Kelly said. "I grew up in PA and NJ, so the people and the atmosphere are so much different than California or Hawaii or anywhere. And yeah, the waves aren’t as good, but just everything appeals to me … And when it gets good, it can rival any other spot."

What a day.. New Jersey good as it gets thanks to #WinterStormStella pic.twitter.com/rXfGHYYmm0