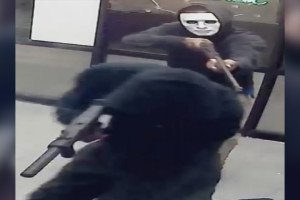 The Philadelphia Police are seeking help identifying a pair of gunmen sought in robberies in West Oak Lane and Ogontz earlier this month.

WATCH surveillance video of both robberies:

According to police, the individuals first hit Silver Star Kitchen, 1453 Vernon Road in West Oak Lane, just after 10 p.m. on March 2, where they robbed customers.

The two masked gunmen stormed into the restaurant, forced two victims to the ground and robbed them, police said. The gunmen fled when a restaurant employee called police.

The two victims also left the restaurant before police arrived and investigators said officers have been unable to locate them.

At 4:20 p.m. Monday, two armed gunmen ran into the Reyes Grocery store, 2139 Chelten Ave. in Ogontz, grabbed a 50-year-old employee, struck him with the butt of a rifle and forced him to hand over money from the cash register, police said.

The gunmen also allegedly stole several cartons of cigarettes during the most recent robbery, police said. They fled the store on foot and were last seen running north on Beechwood Street, police said.

Surveillance video shows the gunmen wore the same masks and carried identical weapons in both crimes.

Police described the suspects as black males in their late teens or early 20s. One is thin and wore a white mask, dark Nike hooded sweatshirt with an emblem on the front, khaki pants and white sneakers during the robberies.

Police said he was armed with a rifle that had the stock removed and the handle's end covered with silver duct tape.

The other suspect is stocky and was wearing a dark-colored mask, dark-colored hooded sweatshirt, dark pants, gray sneakers and had a silver watch on his left wrist.

He was armed with a Tech-9-style weapon equipped with a silencer during the robberies, police said.