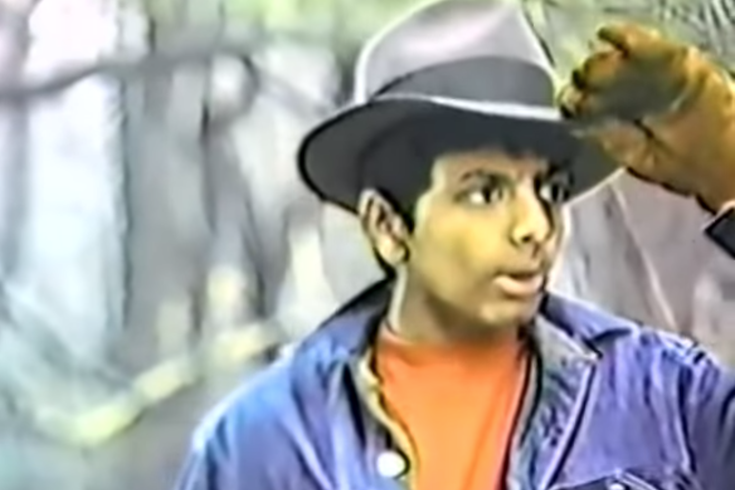 M. Night Shyamalan’s newest film, “Glass”, hit theaters Friday. It’s the culmination of what Shyamalan has called 20 years of work and planning, and also the final installment in the expanded universe that includes his previous films “Unbreakable” and “Split”.

If you’re a huge Shyamalan fan, odds are good I don’t need to tell you to go see it. And even if you just love Philadelphia, there are plenty of reasons to go check out the Pennsylvania filmmakers’s newest work.

But before you head to the theaters, check out this old Shyamalan home video, shot presumably in some woods near his parents’ Penn Valley home.

The short — which was dug up by No Film School this week — features a dog, a sled, and a very young Shyamalan doing his best Indiana Jones impression:

The home video was a special bonus feature on the DVD for his 2004 film “The Village”, the Washington Post pointed out in 2005, and it’s obviously quite a treat.

From the Post’s review of the DVD:

“I hope Shyamalan continues to include old home movies on his DVDs, because they're invariably good for a laugh. The one on "The Village" proves that Shyamalan has long aspired to be the next Spielberg; in it, he re-creates the opening scene from "Raiders of the Lost Ark," featuring himself as a fedora-sporting Indiana Jones-style character. But instead of running away from a massive boulder, he gets chased by a dog. The three-minute mini-movie provides the only moment of much-needed comic relief among the DVD's extras.”

Plenty of filmmakers and artists have “early work,” and it’s clear in this clip that Shyamalan’s talent was there from a young age.

And depending on how you feel about “Glass” — the reviews so far are a mixed bag — you might end up returning here for three minutes of glory.