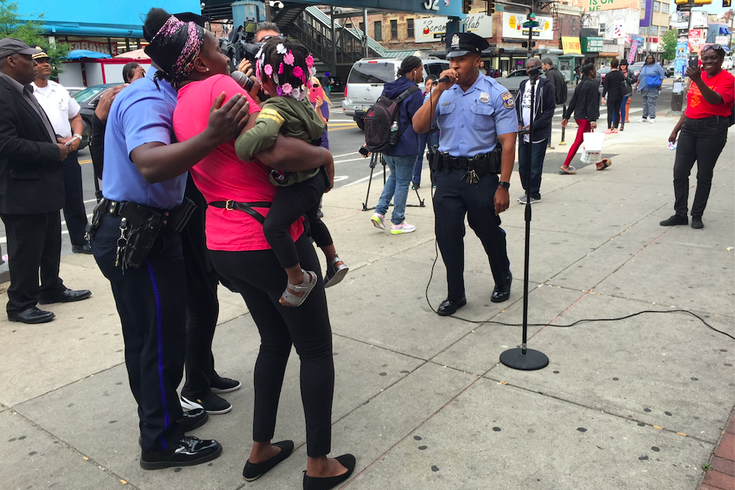 Philadelphia police Officer Nur Ali Baukman works the microphone for a duet during the 'Karaoke with a Cop' event in West Philadelphia on Friday May 17, 2019. Baukman is the community relations officer in the 18th District.

It was something to see and hear: residents and police officers joining in song at 52nd and Market streets in West Philadelphia.

For the second week in a row, the “Karaoke with a Cop” event came to the neighborhood on Friday as part of an effort to bolster the relationship between 18th District officers and those they’ve sworn to protect and serve.

The brainchild of Officer Nur Ali Baukman, the event saw him take the lead before a few shy passersby decided to hop on the microphone with songs, community event announcements and words about how much outreach like this is appreciated.

“This is something different. A lot of us are looking at police officers like they’re bad guys … but no, that’s not the case,” said Brandon Chastang, who was born, raised and remains in West Philadelphia. “Growing up, yeah, I thought that way. I was being ignorant.”

Capt. Matthew Gillespie, the district's commanding officer, said that’s the whole point of the burgeoning event, which will be held either from noon to 2 p.m. or 4 to 6 p.m. each Friday in the summer.

“This is one of our problem areas, but (the loiterers who cause problems here) always leave when they see us setting up here,” he said, noting that last week’s event featured a memorable rendition of the Electric Slide. “It’s all about bridging gaps between us and the community.”

Baukman led the way from the police side of things, singing no fewer than six songs that he piped into the speakers from his mobile phone. 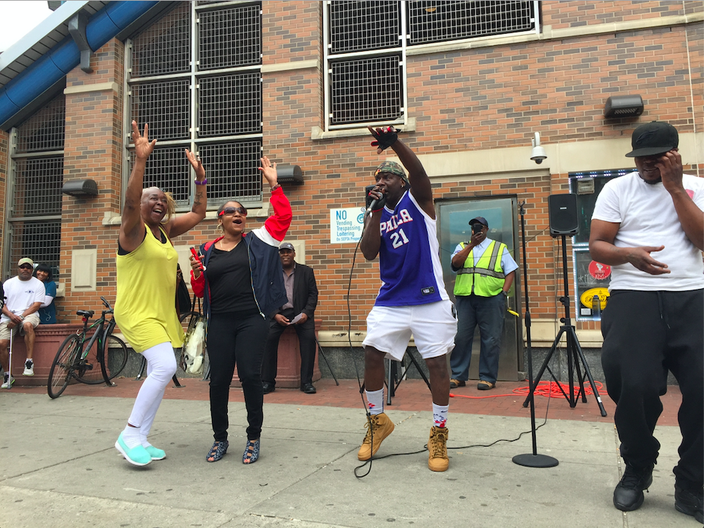 The second-ever 'Karaoke with a Cop' event in West Philadelphia drew quite a bit of attention from passersby, including this group which took the opportunity to sing something from the Sugar Hill Gang.

In addition to tracks from Marvin Gaye and the Sugar Hill Gang, passersby heard the officer perform a duet with resident Aiesha Davis, who held her 2-year-old daughter Khalima Walker.

During another song, a call-and-response with a 6-year-old boy resulted in the child saying he wanted to be a police officer when he grows up. (A couple of profane entries were met with a quick hook.)

“People used to tell me that singing at work was a terrible idea,” joked Baukman, who's been on the force for six years and serves as the community relations officer for the 18th District. “But a couple years ago, I started singing at community events, block parties where I said, ‘Give me the mic and let me see what I can do.’ Videos of that have gone viral, so I keep doing it. It’s bittersweet, but it helps to bring us together with the public.”

Judging from the reaction of those walking past Friday afternoon’s gathering, it’s having the intended effect.

Want to see and hear what you missed? Check out videos here, here and here, or watch the one embedded below:

The 18th District will announce future Karaoke With A Cop events via its Twitter account, Gillespie said.