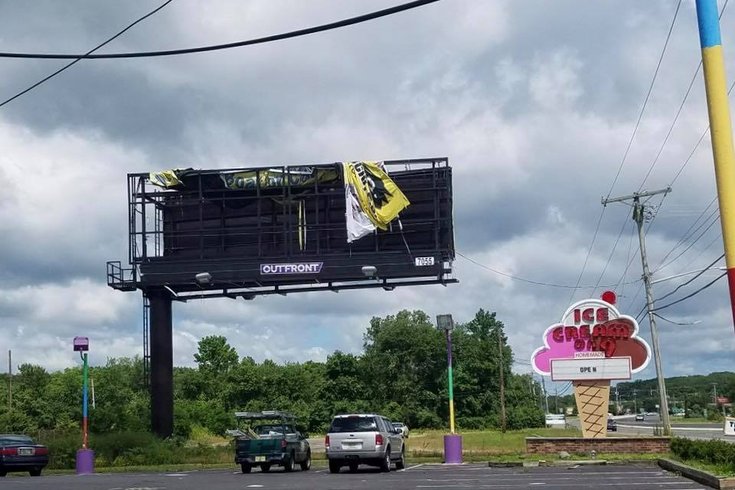 The Howell Township Police Department captured this picture of a billboard damaged in the township after a tornado ripped through the area Saturday morning.

Two tornadoes ripped through southern New Jersey Saturday morning, including one that was caught on video when it touched down in a Home Depot parking lot.

The video shows a tornado moving through the parking lot with winds topping out at 75 mph, causing some damage to buildings and uprooting trees as it tracked southeast near Route 9 in Howell Township, Monmouth County, according to the National Weather Service, which confirmed the tornadoes Saturday night.

Three parked cars were also pushed into each other, according to NWS.

The service estimates the tornado touched down just before 7:30 a.m. Saturday and traveled less than one-third of a mile before dissipating.

A Howell resident, Brett Dzadik, took the video, according to the Howell Township Police Department.

The second tornado hit a few miles east, tracking briefly through Oak Glen Park as it downed a number of trees and pushed over several large metal trash cans. The tornado moved southeast before dissipating, according to NWS.

The tornadoes popped up as a line of powerful storms brought down power lines, trees and caused other damage in New Jersey and Pennsylvania.

What was thought to be a third possible tornado in the state was actually a microburst that hit Brown Mills in Burlington County, the NWS said Saturday afternoon.

The microburst, which the weather service described as a straight-line downdraft that affects areas less than two-and-a-half miles wide with peak winds lasting less than five minutes, downed several trees and power lines near Brown Mills. Winds there also reached 75 mph, according to NWS.

The service had issued a tornado warning for parts of Camden, Gloucester, Burlington, Mercer, Monmouth and Middlesex counties Saturday morning.

There were no injuries in any of the incidents.