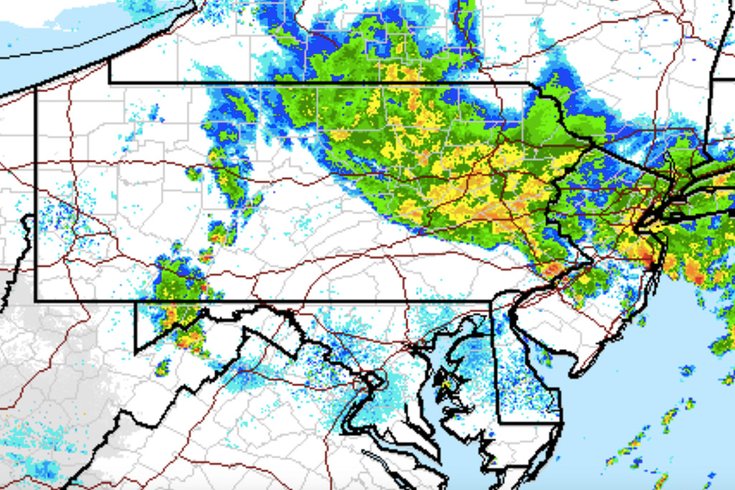 And the rain is not over for the day, apparently.

By 10 a.m., the heaviest rain – between 4-6 inches of rain according to radar and automated gauges – had fallen just west of I-476 in northeast Delaware County and western Montgomery County, according to the National Weather Service. Several areas in Chester and Berks counties saw 2-4 inches of rain.

One of the hardest hit areas was King of Prussia.

Traffic was at a standstill for about an hour on I-76, near the Route 202 interchange, as state police closed down all lanes due to flooding, motorists reported on social media. One Reddit user posted a photo of a box truck up to its headlights in floodwaters.

The road was opened up just before 10 a.m.

A litany of weather alerts for the region posted by the weather service in Mount Holly droned on cellphones through the morning.

A flash flood warning remains in effect until 12:45 p.m. for Philadelphia, Delaware, Montgomery and Bucks counties.

As much as 2 to 3 additional inches of rain were are possible in the warning area.

A flood warning was in effect for the Schuylkill River at Norristown, which had risen to 12.4 feet by late Monday morning, about a half-inch below flood stage. The river was forecast to rise above flood stage on Monday afternoon and through Tuesday morning to about 14.8 feet, forecasters said.

Several more rounds of heavy showers and thunderstorms are expected to impact the area into this evening. Urban, small stream and flash flooding can be expected, exacerbated by ground that is fairly saturated after the recent heavy rains, the weather service cautioned.

Flash floods can be life-threatening. Rapidly rising flood waters may quickly inundate roadways and areas of poor drainage. Streams and creeks can leave their banks, flooding nearby properties. Motorists are advised not to drive into floodwaters.

Behind the mass of slow-moving storms, forecasters said there is some clearing that will only serve to destabilize the atmosphere this afternoon.

There remains a significant threat for localized flooding Monday afternoon and evening in areas generally along and northwest of the I-95/I-295 corridor, the weather service said.

The morning's torrential rains had impact across the region.

Other roads where flooding was reported included I-76 westbound at Vare Avenue in Philadelphia, with all lanes closed; I-476, in the areas north and south of the Broomall exit; Route 38 westbound at Route 73 in Maple Shade, where 1-2 lanes were closed, as well as the ramp, which was closed as of 11:14 a.m.; and Route 130 in both directions south of County Road 615/Union Avenue in Pennsauken Township, where all lanes were closed.

Speed restrictions of 25 mph and 35 mph were in effect on the Betsy Ross Bridge and the Ben Franklin Bridge, respectively.

Flooding was reported at the Jersey Shore, mostly in towns like Toms River and Belmar, north of Long Beach Island.

One Facebook user posted a short video of several inches of water on the floor of the food court at the King of Prussia Mall.

There were also reports of flooding in the area of the Whole Foods store at 21st and Hamilton streets in the Art Museum area of Philadelphia.

The wet weather looks to continue on Tuesday, with a 60 percent chance of showers and thunderstorms. But the sun looks to reappear Wednesday and dominate the skies through the weekend, according to forecasters.

Today: Showers and thunderstorms. Some of the storms could produce heavy rainfall. High near 84. East wind 5 to 8 mph. Chance of precipitation is 80 percent. New rainfall amounts between a quarter and half of an inch possible.

Monday night: Showers and thunderstorms likely, mainly before 10 p.m. Some of the storms could produce heavy rainfall. Mostly cloudy, with a low around 70. Calm wind. Chance of precipitation is 60 percent. New rainfall amounts between a tenth and quarter of an inch, except higher amounts possible in thunderstorms.

Tuesday: A chance of showers and thunderstorms, then showers likely and possibly a thunderstorm after 4 p.m. Mostly cloudy, with a high near 86. Calm wind becoming west 5 to 8 mph in the morning. Chance of precipitation is 60 percent. New rainfall amounts between a quarter and half of an inch possible.

Tuesday night: Showers likely and possibly a thunderstorm before 8 p.m., then a slight chance of showers and thunderstorms between 8 and 10 p.m. Mostly cloudy, with a low around 69. West wind around 7 mph. Chance of precipitation is 60 percent. New precipitation amounts of less than a tenth of an inch, except higher amounts possible in thunderstorms.

Wednesday: Mostly sunny, with a high near 90. West wind around 8 mph.

Wednesday night: Partly cloudy, with a low around 72.

Thursday: Mostly sunny, with a high near 91.

Thursday night: Mostly cloudy, with a low around 74.

Friday: A chance of showers and thunderstorms after 2 p.m. Partly sunny, with a high near 91. Chance of precipitation is 40 percent.

Friday night: A chance of showers and thunderstorms. Mostly cloudy, with a low around 73. Chance of precipitation is 30 percent.

Saturday: Mostly sunny, with a high near 87.

Saturday night: Partly cloudy, with a low around 69.

Sunday: Mostly sunny, with a high near 86.