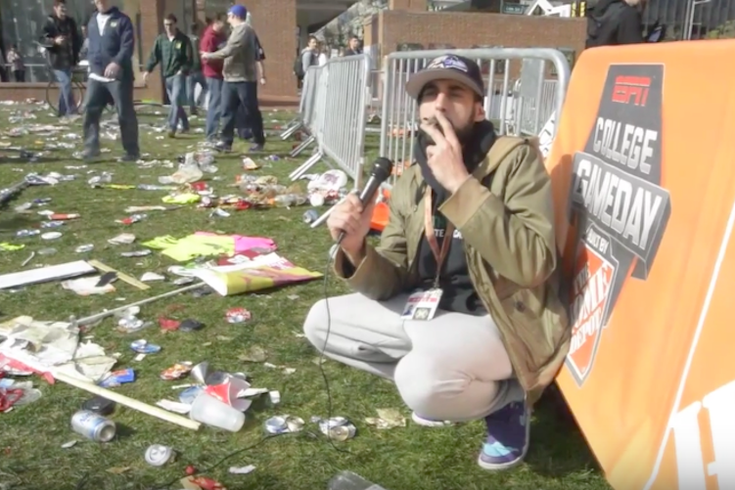 There, he “smoked bones all day long” while coming to grips with the fact the city willingly allowed a place he reveres be transformed into a land of litter, vomit and decadence.

“This isn’t some anti-football social-justice warrior type of thing,” Poe told PhillyVoice on Monday. “They had no problem with the park being trashed with litter and landmarks being vomited on.

“As someone who served five days in federal custody for smoking during a protest at that First Amendment [zone], where you’re supposed to address grievances with the government, it was offensive.”

“It was a weird ‘Where’s Waldo?’ type of revenge for me to be able to smoke, hiding among 10,000 people drinking and puking on monuments and not getting trouble at all.” – N.A. Poe, activist

So, to make his “marijuana is safer than alcohol” point, he released a nearly three-minute YouTube video – hashtag: #SmokeDownPhilly – of all that he saw.

It was markedly different than what he remembers seeing when representatives of various law-enforcement agencies locked him up for smoking marijuana on that very same land two years ago.

In it, Poe interviews attendees, clears aluminum beer bottles from in front of a display commemorating George Washington’s death, chats with a federal park officer and points out “puke” atop a statue upon which the First Amendment is etched.

Check it out (NSFW for raw language):

He put it all into proper context two days later.

“We’ve been doing SmokeDown Philly at all different landmarks across the city and weren’t originally going to do one there. But then, we saw the carnage,” he said. “We have great reverence for the First Amendment.”

While Philly’s new law regarding marijuana decriminalization has made it easier to hold SmokeDown events at places like Geno’s Steaks and Phillies games, Poe said that federal land is still a touchy deal. He said he didn’t get harassed about it, though.

“It was a weird ‘Where’s Waldo?’ type of revenge for me,” he joked, “to be able to smoke, hiding among 10,000 people drinking and puking on monuments and not getting trouble at all.”