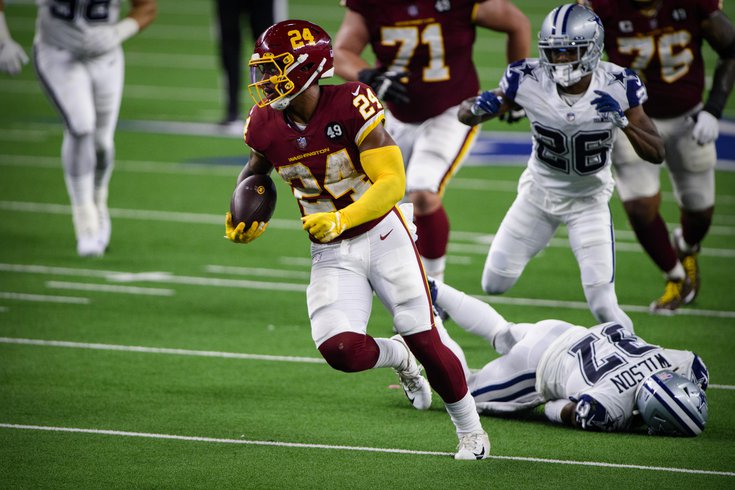 Antonio Gibson is a Cowboy killer.

For the gambling enthusiasts, here are my Week 14 NFL picks. To note, the team logos indicate who I think will win the game, not cover the spread. At the end of the picks, I'll note a few teams that I like based on the spread — with all Week 14 lines coming via Sidelines.io.

Steelers at Vikings (-3): We aren't publishing a "non-Eagles rooting guide" before Sunday this week, but this is an important game for the Eagles, on two fronts. To begin, the Vikings are still a threat to the Eagles' wildcard hopes, but also, the Steelers are currently ahead of the Colts in the AFC wildcard race, and the Eagles would benefit from it staying that way. Eagles fans should be Steelers fans Thursday night.

The Steelers are coming off a huge emotional win over the Ravens on Sunday, while the Vikings were that loser team that lost to the last winless team. The Vikings will be without WR Adam Thielen and LT Christian Darrisaw, while Dalvin Cook is listed as questionable. I like the Steelers' chances of disrupting Kirk Cousins.

Cowboys (-4) at Football Team: The Football Team absolutely dominated the Cowboys in two matchups a year ago, beating them 25-3 in Week 7 and 41-16 Week 12. Those games aren't perfect comparisons to this season, since Andy Dalton quarterbacked the Cowboys in those games, but it's still noteworthy that Washington wrecked Dallas in the trenches.

Antonio Gibson ran 40 times in two games against Dallas last year for 243 yards and 4 TDs, while the Cowboys as a team could only muster 143 yards on the ground on 44 carries (3.3 YPC). Dallas quarterbacks were also sacked 10 times.

Ravens at Browns (-2.5): There was a time when people were calling Lamar Jackson the MVP of the league. Not anymore. Over his last six games, Jackson has thrown 8 TDs vs. 10 INTs, and he's been sacked 24 times.

Baker Mayfield is the only NFL QB with a Passer Rating under 80 in each of the last 3 weeks. pic.twitter.com/fSjrlwIRBP

Mayfield has a torn labrum in his left shoulder. At least Jackson in healthy, for all we know.

Jaguars at Titans (-9): The Titans are desperate for a win after a bad loss to the Texans, followed by a blowout loss to the Patri*ts. A win over the hapless Jaguars would solidify the Titans' stronghold over the AFC South, with the Colts still just kind of hanging around. Tennessee had its bye Week 13, so they had a chance to get healthy and rested for the stretch run.

Raiders at Chiefs (-9.5): Over the first seven games of the season, the Chiefs were allowing 29 points per game, and they only created 7 turnovers (1 per game). Over the last five games, they have allowed 11.2 points per game and have created 11 turnovers (2.2 per game).

Their offense hasn't even gotten on track yet this season, and they're still in contention for the 1 seed in the AFC.

Falcons at Panthers (-3): The loser of this game will be killed off in our Week 15 Hierarchy/Obituary.

Lions at Broncos (-7.5): The Lions finally won a game last Sunday, and celebrated like they had just won the Super Bowl.

LIONS WALK IT OFF FOR THEIR FIRST WIN!!! 🚨

I was curious how the last winless team each year fared in their follow-up game after their first win of the season to see if there were any obvious trends, so I looked at the last 10 NFL seasons:

What did I learn, trend-wise? Not much, but since I did the research, I'm posting it anyway. Maybe someone is curious who the last winless teams were each year? If not, I wasted my time, so I'm wasting yours, too.

This Sunday, it'll either be Glennon or Jake Fromm starting for the Giants. Either way, they're screwed.

49ers at Bengals (-1): The Bengals are the better team, but Joe Burrow has a dislocated pinky that he's trying to play through. The Bengals say it "feels good." Sure it does.

Bills at Buccaneers (-3): Brian Daboll was one of the hottest names during the 2021 coaching hiring cycle. He reportedly wasn't interested in the Eagles' job, presumably because he thought there were better opportunities coming down the pike.

Yeah, this is not good for Brian Daboll. pic.twitter.com/QEt6ss0c1R

He might regret thumbing his nose at a head coaching opportunity.

Bears at Packers (-12.5): Sunday Night Football, national audience, and as he said in their first matchup, Aaron Rodgers still owns the Bears. Could this game be Matt Nagy's last in Chicago? My bet is yes.

Rams at Cardinals (-2.5): Andrew Whitworth will be the first 40-year old to start at LT in NFL history. The great Joe Dolan dug up an old tweet of mine from 2014, when Whitworth and Jason Peters were the two oldest starting LTs in the NFL.

Totally random find here... but this tweet is from 2014. Both Peters and Whitworth will be starting this weekend at left tackle... seven years after they were already the oldest two left tackles in the NFL. https://t.co/z6SAcva87y