This week, it's mainly a look at playoff scenarios vs. draft position...

In Week 13, the Philadelphia Eagles were beneficiaries of a Dallas Cowboys loss on Thanksgiving, and with a win in Miami over the out-manned Dolphins, they would have pulled into a first-place tie atop the division. And then... (fart noise).

Once again in Week 14, the Cowboys lost in a Thursday night game, and the Birds will have another chance to pull even in the disgustingly awful NFC East.

Otherwise around the rest of the league, there isn't much to root for if you're an Eagles fan, seeing as they have mathematically no chance of getting a wildcard. It's division or bust. It would be easy to just skip the rooting guide this week, but unfortunately, my OCD will not allow that.

If you're really going to squint hard to find reasons to watch these games today, in terms of how the outcomes can benefit the Eagles, you can view it through two lenses:

So let's do that.

(In Jim Mora voice)... Playoffs?!? PLAYOFFS?!?!? Yes, it's silly to even discuss the playoffs while fans of the team just hope, like Mora back in the day, that they can "just win a game."

Now that we've gotten that disclaimer out of the way, last week we ranked the Eagles' most ideal playoff opponents in the wildcard round of the playoffs, should they get there. We'll skip the analysis this time around, and just re-post the order from most ideal to least ideal:

If you're on board with those rankings, here are the ideal winners of each game this week:

• Washington at Packers: An ideal scenario would be if the Packers somehow got the No. 1 seed, in which case there'd be a pretty good chance the Eagles would have to play in Green Bay in the divisional round. Of course, the Eagles already won there earlier this year on a short week, and the harsh elements might actually benefit their very ugly brand of football.

• Lions at Vikings: This game doesn't really matter. After losing in Seattle last weekend, the Vikings aren't catching the Seahawks, and they're very likely not catching the Niners either. Their season results will realistically be one of the following:

As such, if the Eagles were to get the 4 seed, they will likely not see the Vikings in the playoffs.

• 49ers at Saints: Should the Eagles make it to the divisional round, a date with the Saints in New Orleans has not gone for well them in the past.

• Seahawks at Rams: At this point, it's probably just best if the Seahawks win their division, because if they don't, they're probably coming to Philly for the wildcard round.

First, let's take a look at what the draft order would be if the season ended prior to this Sunday's slate of games: 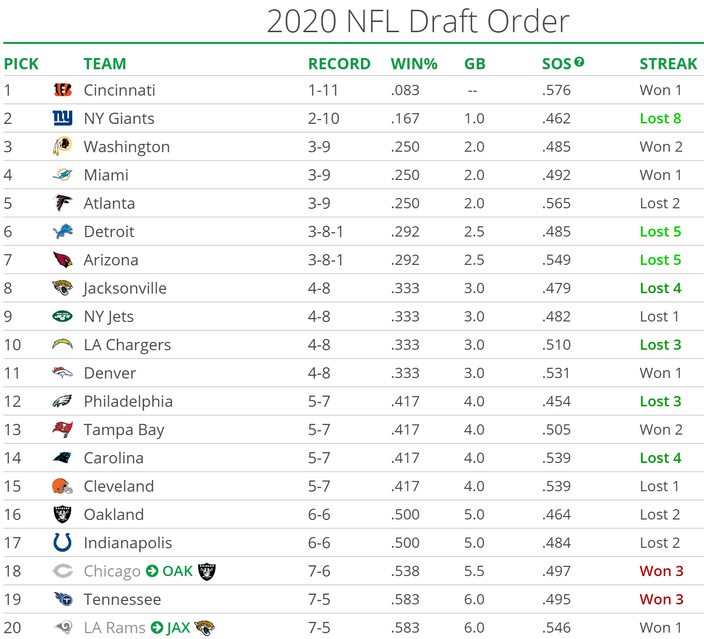 For the Eagles' purposes, if they don't win the NFC East, the teams that are the most likely to affect their draft position are the ones with the closest records. Therefore, it's ideal for the Eagles if the teams with 4-8, 5-7, or 6-6 records win. Right? So based on that premise, here are the ideal winners of each game this Sunday:

OK, now if you really want to go deep down the nerd hole with draft positioning analysis, the following two matchups are between teams that are all almost certainly going to the playoffs, or at a minimum, will already be drafting after the Eagles. But they do still matter to a small degree. The ideal winners: