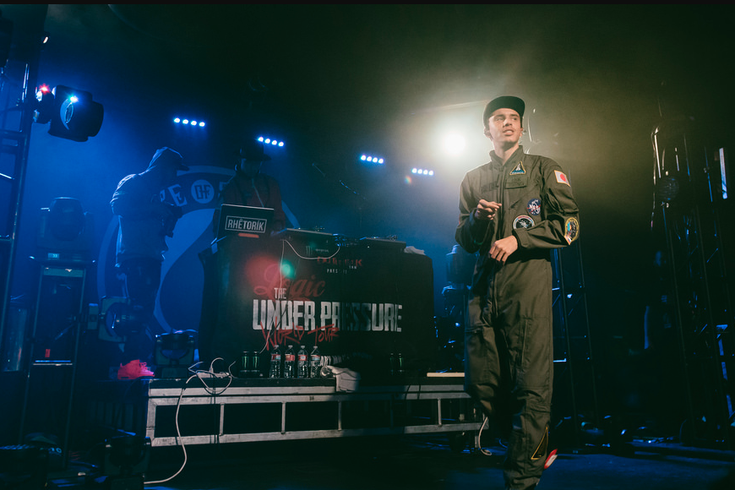 Logic will be performing Saturday, Aug. 5 at Festival Pier.

Belle and Sebastian @ The Mann

For a long time, Belle and Sebastian, the Scottish band most known for their melancholy indie rock, weren’t the type to incite dancing from their live audiences. Instead, the group’s music washed over your emotions, a slow-moving folksy sound better suited to swaying than cutting up. But a couple years ago, they changed course and found a second wind on the dance floor. Ever since, they’ve toyed with disco and dance pop, trading in songs helmed by jangly guitars for ones grounded in thumping rhythm sections.

Surrounded by a troupe of buzzing up-and-coming Philly emcees—Lil Uzi Vert, PNB Rock, Tunji Ige—GrandeMarshall has played the long and quiet game. Signed to Fool’s Gold Records, Marshall hasn’t chased trends or outsourced his style. He’s stayed true, pushing North Philly reality raps that bemoan instead of glorify his hardships. He has an erratic flow and quippy lyricism—a recipe for the densely layered autobiography he shared on his last album, “My Brother’s Keeper.” Marshall isn’t taking a break, but he seems to be taking a breather as he builds towards his next statement.

If you’ve listened to the nostalgia-conjuring boom bap of Joey Bada$$, it’s the Black Moon rapper Buckshot he seems to most readily channel. Wu-Tang Clan gets all the attention when we talk about grimy early ‘90s New York hip-hop, but Boot Camp Clik and Buckshot—the latter is a trio that folds into the former’s larger collective—had their own watershed moments in the same movement. Even if it has been overshadowed in the decades since, in 1993, Black Moon’s “Enta da Stage” calcified the excitement surrounding Brooklyn hip-hop, the punchy beats provided by the brother-duo Da Beatminerz wrecked apart by the grit of Buckshot’s voice. Black Moon has released three albums since that debut, but it’s still that first one that everyone returns to for obvious reasons.

Nickleback is the butt of a lot of jokes. To be sure, with their dramatic rock lyricism and anthemic backdrops, the Canadian rockers open themselves up to the snide criticism of highbrow critics. But Nickelback’s low-stakes rock resounds with fans for a reason: it’s easy to digest. There’s no over thinking a Nickelback record, which is as good a pitch for stardom as they come.

The young Washington, D.C. rapper Logic has a cult following of fans that bemoan dumbed-down hip-hop. Logic isn’t at odds with the radio, but he certainly has some thoughts on how hip-hop should sound: the drums should knock, the lyrics should weave and brim with wordplay. After a string of impressive mixtapes, the 27-year old Maryland native signed to Def Jam and launched his own nerdy-but-cool lifestyle brand that has attracted droves of teenage fans. He’s not so self-involved to cast himself as hip-hop’s lone savior, but Logic’s message music is brimming with self-reflective positivity.

Laetitia Sadier is a veteran of the French indie rock scene. In the ‘90s, she helped import a convention-breaking easy listening style to the states as the lead singer for the genre agnostic post-rock group Stereolab. For just under two decades, Stereolab never budged from their meandering artistry, so it was little surprise when Sadier announced her own out-there group called Laetitia Sadier Source Ensemble. The group has only released one album, this year’s “Find Me Finding You,” that confirms Sadier’s tendency towards inventive nostalgia.

Based in Nashville, Future Thieves is an alt-rock group with a sound that doesn’t ruffle any feathers. If anything, the group’s hallmark is an eclectic approachability. The band recently escaped to Eastern Tennessee to record their new music, a distraction-free vibe that produced their latest single, “Sucker,” which is a lulling groove of country-inflected soft rock.