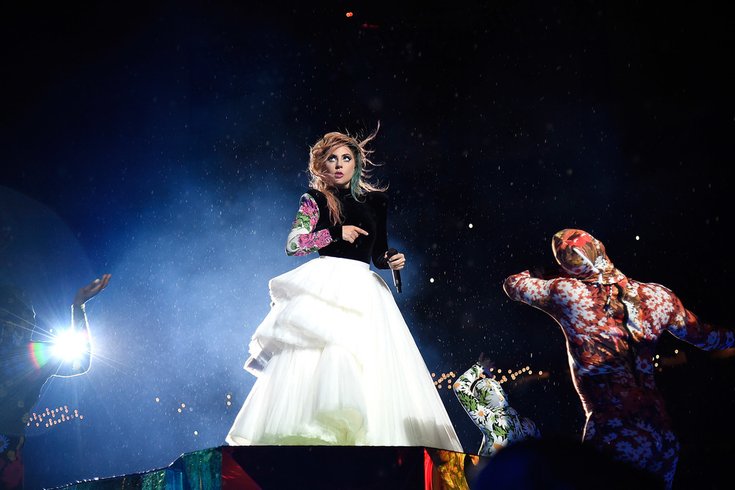 Throughout the kick-off of her two-night-stand in Philadelphia on Sunday at the Wells Fargo Center, Lady Gaga repeatedly spoke of Pennsylvania. The dramatic powerhouse vocalist mentioned her family in the Keystone State and the support she’s had in Philly since her start (a support she’ll surely feel during Monday’s showcase). But the one Pennsylvania element she didn’t mention by name was the intricate staging custom-built for her by TAIT – the famed, global, Lititz, PA staging/lighting effects conglomerate.

Rarely would a reviewer bring up a stage designer by name in a review, let alone in a first paragraph. Yet, in the case of “The Joanne World Tour,” rising-and-falling main-stage hydraulics that lifted at her whim – along with floating, dynamic stages where Gaga frolicked – deserved such billing. TAIT’s staging was as bold, active and loud as the singer herself – an equal partner in the evening’s magic.

That doesn’t mean the show was perfect. The moving mechanics of “The Joanne World Tour” – titled for an aunt who died before Gaga was born, giving the singer her middle name – threatened to overwhelm Gaga during melodically unrewarding songs such as “Dancin' In Circles.” The gimmicky-ness of too many dancers and unnecessary filmed interludes (save for one cool, drunken, Ryan Murphy-like horror-scape) slowed proceedings. A Broadway-esque show with seven acts and an encore – this stop on “The Joanne World Tour” – could’ve been hammy. Ultimately though, nothing was more sensational than Gaga herself – a woman who, admittedly, fuses the influence of performance artist Marina Abramović, Pop Art godhead Andy Warhol, and David Bowie into one original whole.

Decked out in a series of body-hugging outfits (fringed, bedazzled leather jackets, velvet cat-suits, Ziggy Stardust-like jumpsuits, white feathers), Gaga tore into each tune with gusto and emotionally vulnerable grace. On the electro-dance side of the live ledger, she tackled smash hits such as “Just Dance,” “Applause” and “Bad Romance” with grand, throaty theatricality. Surprisingly, grungy rockers “Diamond Heart” and “A-Yo” got a tough, gruff vocal workout worthy of Stevie Nicks. Hearty piano-led tunes such as a jaunty “Come to Mama” and a tender “The Edge of Glory” found Gaga’s voice soulful, but hurt – even piercing. Still, nothing prepared you for the warm, tearful emotionalism of “Joanne” itself. Rendered on a smaller stage, with Gaga playing acoustic guitar, the ballad devoted to a family’s wounds and ties that bind was just as thrilling as any stagey FX.