What they're saying: Will Dez Bryant hold out? 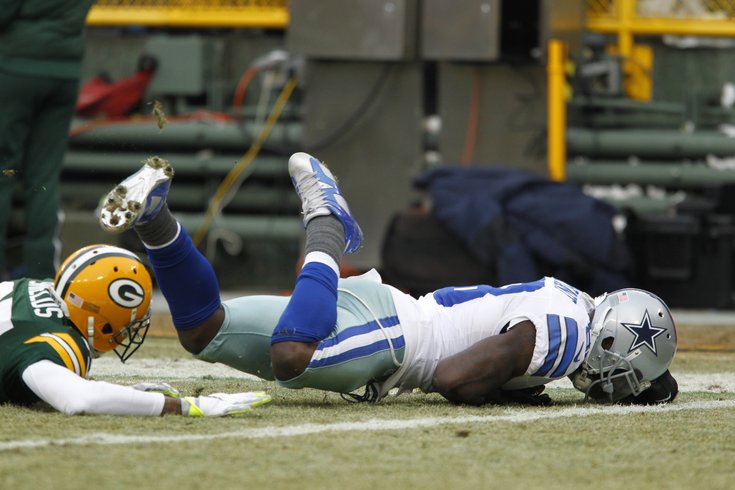 Clearly not a catch.

Earlier this offseason, the Cowboys slapped the franchise tag on Dez Bryant, who is threatening to hold out into the regular season without a new long-term deal, per Chris Mortensen of ESPN:

Dez Bryant is contemplating not reporting to the Dallas Cowboys for the regular-season opener unless he is signed to a long-term contract by July 15.

"This is no rumor; it's legit," Bryant told the NFL Network, confirming what sources familiar with the receiver's negotiation strategy earlier told ESPN.com.

Bryant has not signed his franchise tag, which would guarantee him $12,823,000 for the 2015 season. The deadline for franchise-tagged players to negotiate and sign a long-term contract is July 15. Bryant's only other options are to play under the $12.823 million tag or not play at all.

I'd be shocked if it got to the point where Bryant actually sat out a game. Bryant doesn't want that, and neither do the Cowboys, but that July 15th date is certainly worth watching.

More of what they're saying:

They bring Vinny Curry off the bench to rush the passer and Mychal Kendricks is one heck of an extra inside linebacker.

This growth mindset is based on the belief that your basic qualities are things you can cultivate through your efforts. Although people may differ in every which way— in their initial talents and aptitudes, interests, or temperaments— everyone can change and grow through application and experience. Do people with this mindset believe that anyone can be anything, that anyone with proper motivation or education can become Einstein or Beethoven? No, but they believe that a person’s true potential is unknown (and unknowable); that it’s impossible to foresee what can be accomplished with years of passion, toil, and training.

Eagles players with one last shot to make the roster: Now or Never - Patrick Wall, BGN

Perhaps more than any other player on this list, Earl Wolff's mission is clear: stay healthy and win the second starting safety job. The Eagles' fifth round pick in 2013, Wolff has shown flashes, but his progress has been hampered by injury. In two seasons Wolff has played in only 18 games in two seasons, starting seven. Wolff missed the last eight games of the 2014 season after undergoing knee surgery, and has yet to step foot on the field for OTAs.

This year, though, Wolff will be facing stiffer competition than ever before. Walter Thurmond III appears to have the early lead in the race for the starting spot opposite Malcolm Jenkins, and that's far from the end of it. Guys like Ed Reynolds and Jaylen Watkins are also vying for that spot.

Would losing the starting job mean the end of Wolff's tenure as an Eagle? It seems unlikely (or at least, less likely than some of the other players on this list), but Chip is fond of the phrase "the best ability is durability". Will the Eagles want to hang on to Wolff if he can't stay on the field? This summer he will need to overcome his history of injuries and prove that he can take his game to the next level.

#JimmyNote: If I were to make a 53-man projection right now, I would not have Wolff on it. Chip Kelly has his version of Wolff's medical diagnosis, and Wolff has his. My read is that the team clearly thinks he should be practicing, and he is not. Whether the team is being fair or not (if indeed my read is correct) is another debate, but at what point do the Eagles tire of a player who can't stay healthy?

Peters: DeMarco Murray Will Get His Yards - Chris McPherson

In Jason Peters' mind, the Eagles issued the All-Pro tackle and the rest of the offensive line a challenge this offseason with the addition of running back DeMarco Murray?

"It's a big weight on our shoulders. He was the rushing champ last year. He almost broke the record. For him to come here and not duplicate that, that would discredit us a little bit with the Dallas offensive line. We've got to make sure he gets his yards," Peters said. "That's a big challenge. The Dallas offensive line is good. We're just better. We're going to make sure he gets his yards."

#JimmyNote: I respectfully disagree with Jason Peters here. The Eagles' offensive line is not better than the Cowboys'. Not with the guards the Eagles are rolling with, and certainly not with their lack of depth.

However, that doesn't mean it's a huge gap. I would say the Eagles' offensive line is "different." The Cowboys have a better run blocking unit, while the Eagles' OL can do more things on the perimeter and down the field with their athleticism.

Conditioning was hardly the primary cause for the Eagles loss to Seattle. Mark Sanchez was 10-20-96 yards. The offense struggled to move the ball all game long. There were wide open receivers in that game. Sanchez either didn’t see them or failed to get the ball to them. He’s not the only reason the Eagles lost, but you aren’t going to beat one of the best teams in the league with your backup QB very often.

Physicality??? The defense held Marshawn Lynch to less than 90 yards and only 3.74 yards per carry. The run defense had a pretty good day. Russell Wilson made plays with his arm and legs. The Eagles had no answer for him.

Williams just never seemed happy in Philly. He played for the Ravens previously, where the defense is the key to the team. Kelly is an offensive guy. Williams obviously didn’t like or embrace Kelly’s ideas.

#JimmyNote: The above was Tommy's response to Cary Williams' comments, and he makes some good points.

I appeared on The 700 Level Show with Gonzo: